Erik Cais threw away Barum Rally Zlín victory on the final stage as he rolled out of the contest, handing Jan Kopecký an historic 10th win on the rally.

Driving a Ford Fiesta Rally2, 22-year-old Cais – who hails from the Zlín area – had led Kopecký’s Škoda Fabia Rally2 evo by 20.2 seconds prior to the final stage but put his car onto its side and surrendered what would have been his first European Rally Championship victory.

Andreas Mikkelsen finished second, 40.1 seconds behind Kopecký, and assumed the lead of the ERC at the season’s midway point as defending champion and erstwhile series leader Alexey Lukyanuk crashed his Citroën C3 Rally2 in testing and wasn’t able to start the Barum Rally Zlín.

Filip Mareš rounded out the podium in third.

Kopecký, who has won every single Barum Rally Zlín since 2015, was quickest on Friday evening’s street stage and duly set about stamping his authority on an event he knows so well the following morning, opening up an eight-second lead over old Intercontinental Rally Challenge for Mikkelsen at first service.

But across the afternoon Kopecký was reeled in, first by Mikkelsen who got to within 0.2s of him but then by Cais, who had been over 10s down in third in the morning.

The local driver was adjusting to tackling his home event in a four-wheel-drive car for the first time and soon found a rhythm, moving into the overnight lead with a stunning effort in the darkness of SS9 to beat Kopecký by 7.9s and establish a 2.1s advantage.

Six stages remained on Sunday and perhaps natural order was expected to be restored, but Cais was having none of it.

Quickest on both of Sunday’s first two stages, Cais really stamped his authority on SS12 Májová with a time that was a scarcely believable 13s better than Kopecký’s – and Kopecký was a strong 8s clear of next-quickest Mikkelsen.

That earned Cais a handy cushion at the front which he simply just needed to protect over the last three stages, but an accident on the same stage he dominated earlier on Sunday was a heartbreaking way for his event to end.

“I think he deserved to win,” said a stunned Kopecký when he reached the end of the final stage and learned that Cais had crashed. 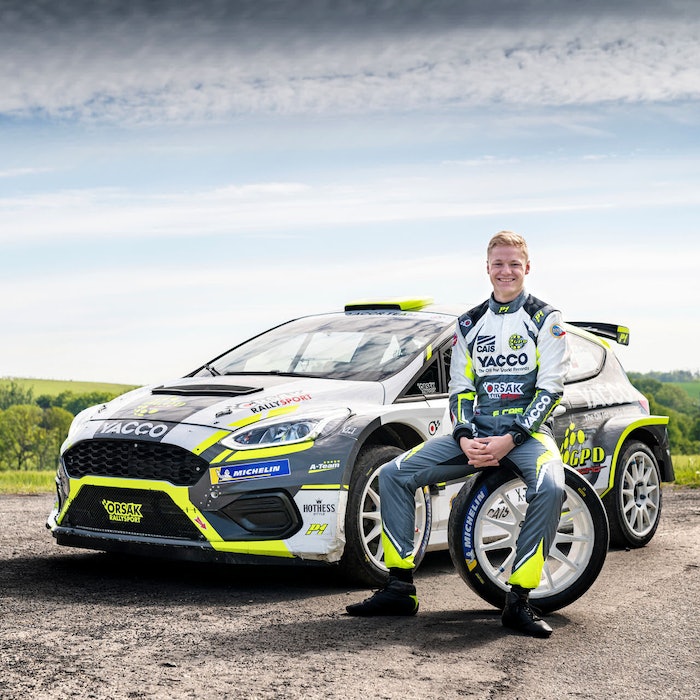 “Yesterday we had a nice fight with Andreas and Erik and from last [run of] Pindula [yesterday] he was too fast. But it’s a shame because he [Cais] really deserved that win.”

Mikkelsen’s second place earned him his second ERC podium of the season on his first event alongside Jonas Andersson, as Mikkelsen and Ola Fløene parted company after Rally di Roma last month.

Mikkelsen’s co-driver for his next event, Acropolis Rally Greece in the WRC, hasn’t been confirmed but Andersson – who usually navigates for Ole Christian Veiby – is now eligible to compete in the WRC again following the suspension he and Veiby received for breaking COVID-19 protocols before Rally Portugal.

Andersson’s ban lasted for three months while Veiby still has another three months left to serve before he can compete again in the world championship.

Over a minute shy of Mikkelsen, Norbert Herczig and Mareš were locked in an intense fight for third place, separated by just 0.6s ahead of the final stage.

Mareš has form on final stages of Barum Rally Zlín, having beaten Chris Ingram by 0.3s in 2019 and taking the ERC1 Junior title in the process, and repeated the trick again in 2021 to defeat Herczig

However had Mareš not checked into the first time control of the rally one-minute late, he would have comfortably secured third in his Škoda.

Mikołaj Marczyk finished fifth ahead of another tight final-day battle. Efrén Llarena – who’s having a stellar season so far – was a touch off the pace in the Czech Republic and found himself defending from an inspired Callum Devine who was punching in his most impressive performance of the season to date.

Llarena lost what became sixth to Devine on SS13 of 15 but retook the spot on the penultimate stage, 1.5s ahead. However, Devine chose a slicker compound tire in the damp SS15 conditions and ended up 13.4s behind at the finish, but was the first non Škoda driver.

Miroslav Jakeš, Yoann Bonato and Martin Koči completed a top 10 which didn’t feature Hyundai junior Jari Huttunen – driving the usual MRF entry that’s occupied by Craig Breen – as he ran wide wide, slid the rear-left of his Hyundai off the road and felled a tree.

Huttunen had been eighth at the time. Simon Wagner was another casualty as he was running as high as fourth before a puncture led to his retirement, three stages from home.

The final stage was canceled for all competitors that started behind Kopecký as Cais’ crashed Fiesta was blocking the road.