X44 and Andretti United won the Arctic X-Prix two semifinals on Sunday as Extreme E brought wheel-to-wheel car racing to Greenland for the first time ever in dramatic style.

Carlos Sainz’s late arrival to the pre-grid for semifinal one was the first moment of tension for the day, but the Acciona Sainz driver made it just in time.

X44’s Cristina Gutiérrez had the best starting spot so launched into the lead, but Emma Gilmour got past her at gate one by choosing a better line. Sainz then got by too as Gutiérrez dropped back.

She pressed the ‘hyperdrive’ button to double her power from 200kW to 400kW for four seconds, but her rivals did the same and Sainz took the lead from Veloce’s Gilmour on the long straight that was added to the course overnight in place of a technical first sector. 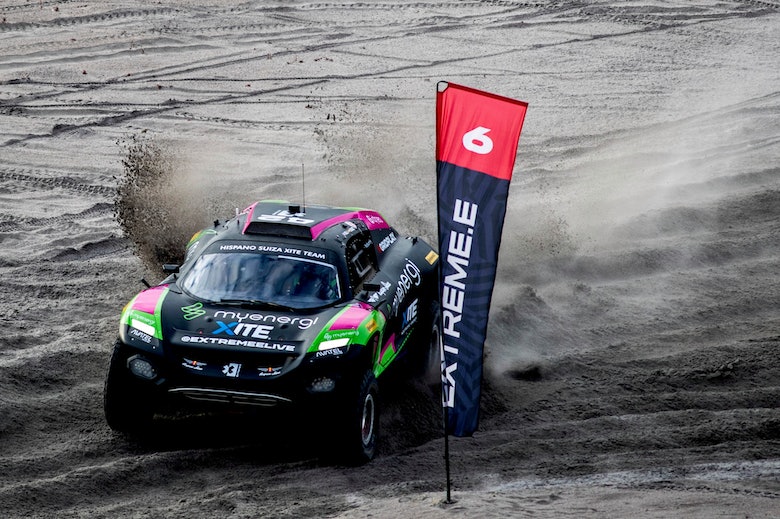 Gilmour tried reclaiming first place at gate six, the hairpin that takes drivers up the glacial riverbed’s cliff edge, but couldn’t get ahead and on the steep ascent actually bogged down, getting nerfed by Gutierrez over the crest. That enabled Sainz to pull away, as X44 got held up slightly by Veloce further on.

The 11-second margin Sainz completed the lap with meant being the slowest team in the driver switch wasn’t a disadvantage, but once Laia Sanz took over lead gap rapidly reduced.

Veloce emerged ahead of X44 from the switch, but X44’s top qualifier Sébastien Loeb was all over Stéphane Sarrazin from the off and tried to pass on the single-lane gate six ascent. He couldn’t do it, but on the flooded lake section was able to barge past outside of the single-lane track.

The pair went to the riverbed less than four seconds behind Sanz, and some fully committed jumps on the banks brought Loeb right onto Sanz’s gearbox and they went side-by-side at gate 24. Sarrazin closed in entering the ‘rock garden’ section too, and he opted to cut dramatically across to pass both.

Loeb overtook Sanz but clouted a bump that dropped him to third, only to be back in the lead seconds later as the front-left of Sarrazin’s car collapsed and he fell to third – meaning X44 and Acciona Sainz progressed to the final.

What an incredible end to Semi Final 1! What a chase to the line. @AccionaSainz and @TeamX44 advance through to the final 🙌

The second semifinal featured the Abt Cupra XE, Rosberg X Racing and Andretti United. Abt Cupra led off the line with Jutta Kleinschmidt, but her driveshaft broke shortly after and that meant it was sadly only a fight between the Andretti and Rosberg teams for the win.

Timmy Hansen nipped down the inside of World Rallycross rival Johan Kristoffersson to take the lead into gate one for Andretti, but Kristoffersson did the same trick for RXR at gate two as he used ‘hyperdrive’ early.

The leader then made an uncharacteristic mistake and clouted a gate in the lake section though, copping himself a 10s penalty and putting Andretti on the front foot even before Hansen passed on the riverbed with an alternative line.

It started to rain heavily as they finished the lap, with Kristoffersson nabbing the lead back by being later on the brakes into the driver switch zone, and his team-mate Molly Taylor held that lead until Catie Munnings replicated Hansen’s riverbed pass for Andretti to ensure victory on the road as well as on the timesheets.

Despite the penalty, RXR still progressed to the final as Mattias Ekström took Abt’s car to the finish 54s behind.

“[That was] one of the most enjoyable races I’ve had in a long time,” Hansen beamed afterwards, while team-mate Munnings called “Timmy just the absolute GOAT of the sport” after celebrating victory together.