The cars are primed, polished and looking perfect. A pair of McRaes are on final approach into Seattle and the weather’s set for the low Seventies and sunshine.

DirtFish’s first trip to Velocity Invitational at WeatherTech Raceway Laguna Seca is on track for next week.

After being one of 600,000 people to watch the live stream of the event last year, DirtFish owner Steve Rimmer was delighted to accept the invitation to travel to the Monterey Peninsula in person this time around. He was even happier to wheel out some of the world’s best rally cars for the October 14-16 event.

“Anybody who knows me knows I’m an absolute motorsport enthusiast,” said Steve. “Yes, rallying is my first passion when it comes to petrol, but the chance to watch Mario Andretti driving a McLaren MP4/28A is probably a once-in-a-lifetime moment. It’s going to be a very, very special weekend.

“We know Velocity is looking to mirror Goodwood’s Festival of Speed in the UK. From what we’ve seen of the entry for the event, the quality of cars and the show that’s being planned, it looks very much like they’re on the right road.”

Steve is delighted to be hosting former World Rally Championship frontrunner and factory driver Alister McRae and his 18-year-old son Max – a driver on the verge of his own WRC debut – at Velocity. 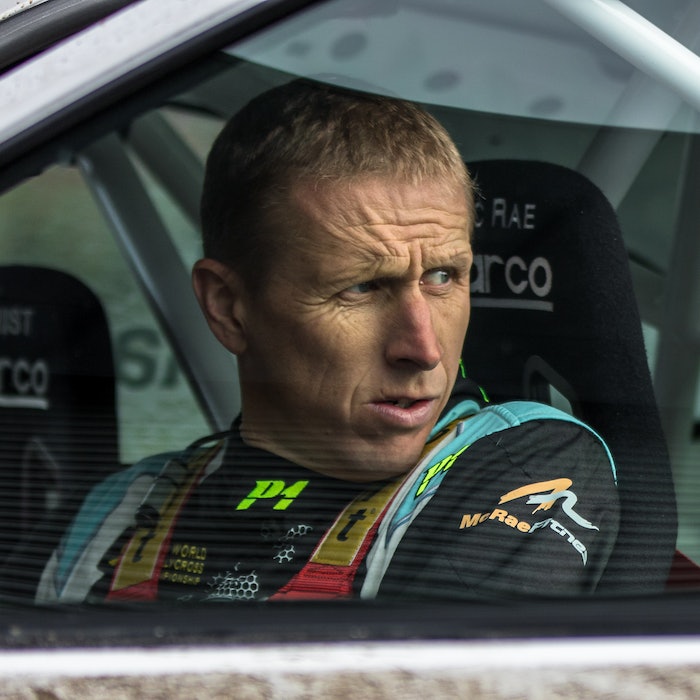 Velocity is a big deal, a really big event. To be going there with the opportunity for Max and I to drive some of Steve’s cars is just fantastic. Alister McRae

Steve added: “When we decided to take these fabulous cars down to Laguna Seca, we needed a couple of serious drivers and the McRae family name remains the biggest in the sport of rallying. We work a lot with Alister and Max – I’m supporting Max’s program to get to the WRC next season – and it’s always great to spend time with them.

“It’s even better to see the pair of them in their natural environment and driving rally cars.”

Alister couldn’t agree more, adding: “Velocity is a big deal, a really big event. To be going there with the opportunity for Max and I to drive some of Steve’s cars is just fantastic.

“As is always the case with these events, I’m sure the atmosphere is going to be superb with incredible cars and some of the sport’s biggest names out there. Like Steve said, I think it’s going to be an awesome weekend!”

For Max, the excitement is building just that little bit earlier.

“Velocity looks cool,” said Max, “but I’m also pretty stoked to be going to DirtFish for the first time as well. I’ve grown up with the DiRT game and seen DirtFish on there so many times. It’s a kind of iconic rally place to be heading to. To have that and Velocity is something pretty special in one week!”

Steve’s six of the best for Velocity Invitational:

This was the car that tempted the 2001 World Rally Champion Richard Burns away from Subaru, the team with which he’d won his title. While the Englishman never won a WRC round in a 206, drivers like Marcus Grönholm and Gilles Panizzi ensured this was an era-defining car.

Originally built by Olsbergs MSE, this is a Ford Fiesta like no other. This one comes with 800bhp from a heavily developed two-liter engine. Marcus Grönholm drove this all-wheel drive car at the 2009 Pikes Peak International Hill Climb and was confident of a sub-10-minute run up what was then still a mixed-surface 12.4 miles. Sadly a rear puncture cost him time and left him fifth overall – but he did take the ‘Rookie of the Year’ title.

Talk to any motorsport fan about Group B and watch as they go misty-eyed and wax lyrical about machinery like this, the MG Metro 6R4. This generation of cars gave free reign for designers and technical directors to live their dreams. That’s how the humble Metro – designed as a modern interpretation of the Mini – found a V6 engine on the back seat, total traction from four-wheel drive and wilder aero than even F1 was running in the Eighties.

This is the very car US stunt driver and all-round, all-action hero Travis Pastrana drove in the 2007 and 2008 X Games. He finished on the podium both times, but won gold in 2008. The car remains one of motorsport’s most iconic sights and sounds with the boxer engine unmistakable even today among rally fans.

This was the car which brought the curtain down on four-time World Rally Champion Tommi Mäkinen’s career. The 2002-specification Subaru, codenamed S8, was another stunning example of Prodrive’s world-beating engineering. While Mäkinen didn’t win in the 2002 season with this car, it was the model which underpinned Petter Solberg’s 2003 WRC drivers’ title.

Ultimately, Lancia got this one wrong. But in doing so, they got this one very right…
At the time when the world was turning to turbocharging and four-wheel drive, the Turinese forged ahead with supercharging and rear-wheel drive. The result was this car which – against all odds – helped Lancia lift an unlikely manufacturers’ title against Audi’s quattro in 1983. This semi-works example driven by Italian star and former European Rally Champion Fabrizio Tabaton.