Ken Block has blitzed the second day of Oregon Trail Rally, winning all eight of Saturday’s stages in his Hyundai i20 Coupe WRC as the two Subaru drivers tied for second place.

However Pastrana’s overnight lead would be short-lived as he was soon overhauled by a charging Block, although Pastrana was hampered given his usually bulletproof Subaru was suffering with a power problem. 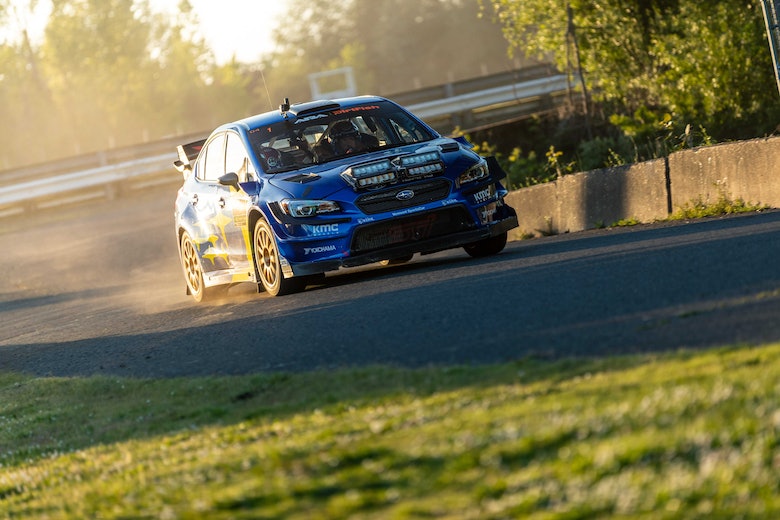 Pastrana reported that his top speed had been reduced to just 70mph on the second stage of the day where he leaked close to half a minute to Block.

The Subaru Motorsports USA team managed to cure Pastrana’s #1 WRX STI at first service, but the same problem then began to plague ARA championship leader and last year’s Oregon winner Brandon Semenuk across the next loop too.

His car was also later fixed, but even when both WRX STIs were back to health, they didn’t have an answer for Block’s Hyundai.

It was a crushing performance from the Head Hoonigan in Charge who closed out the day with a dominant 59.3s advantage at the head of the field.

Pastrana and Semenuk may be cut adrift from the leader but they’re tied together, literally, in the final two podium spots. A strong charge from Semenuk across the final few stages drew him dead level with his team-mate ahead of Sunday’s seven stages.

Following Kyle Tilley’s crash on the first superspecial, Tom Williams has been left alone in the RC2 class and, like he has on recent ARA rounds of late, he’s firmly established himself as best of the rest in his Ford Fiesta Rally2 to hold fourth overall.

Dave Carapetyan is similarly lonely in his class. He had trailed ARA returnee Jeff Seehorn initially but when Seehorn retired with a loss of power aboard his Subaru, Carapetyan was able to enjoy a clean run in the L4WD class.

He’s fifth overall, in a close battle with O2WD leader Derik Nelson who particularly impressed on the day’s two Tarmac stages – Maryhill and Goodnoe Hills – in his Subaru BRZ.

The gap between them stands at 9.7s overnight.

George Plsek and Patrick Gruszka are even closer in seventh and eighth, 3.8s apart, while Jason Bailey – driving a Ford Fiesta Rally3 for the first time, is on course to score the maiden top 10 for a Rally3 car in the ARA in ninth.

Philip Wearn completes the top 10 in his Subaru.

Andy Miller is third while Julien Sebot leads the two-wheel-drive runners in his Fiesta.

How 12 cars were able to beat the Rally1s in Portugal