Ah, the day-ending superspecial. Nothing to see here. With the serious stage action done for the day, the WRC crews often head into town for a quick jolly in front of the fans. Show up, do some donuts, a couple of laps around a barrier-laden city street, and reach the finish safely. No drama.

Not on this Rally Portugal. Not in Porto. Something incredibly unusual was afoot in Portugal’s second city.

Adrien Fourmaux’s Ford Puma was the second car to roll into stop control on Saturday night. With his seat at M-Sport on the line, he’d be relieved to have completed a relatively trouble-free day, stopping to change a wheel aside.

He sensed something was up.

“I think the Rally2 car can be very fast on this stage,” he told DirtFish at the finish.

Fourmaux knew it was coming. And the writing was on the wall. Every car that came through, the stage times toppled at a scarcely believable rate.

When Sordo put 8.9s on podium rival Takamoto Katusta and 14.9s on his own team-mate Thierry Neuville, he couldn’t believe it.

“Are you sure I didn’t do one lap less?” asked a bemused Sordo. It made no sense.

Except it did. Road evolution on the cobbled streets of Porto was far more pronounced than it had been on the gravel stages.

So when the Rally2 cars arrived to take their turn, they flew.

The entire top 10 was packed with Rally2 cars atop timing sheets on the Porto superspecial, with rally leader Kalle Rovanperä all the way down in 13th as the best of the big boys.

Even Junior WRC driver Robert Virves in a Ford Fiesta Rally3 had snuck in ahead of the world championship leader.

The best, though, was saved for pretty much last.

He’d retired on Friday with a steering failure and returned under super rally, meaning he started down the running order. Way, way down.

A driver capable of being in the top five in WRC2 on merit, finding himself starting in amongst the well-to-do gentlemen privateers when road order made a difference?

He smashed everyone. 2.7s faster than the entire field. On a two-mile superspecial. In a Rally2 car.

It leaves only one question: how on earth did this happen?

If you think it’s mad that 12 support class cars finished ahead of the fastest Rally1 car, the odds of McErlean being the one to top the standings were even longer. It was a miracle he could even see where he was going. 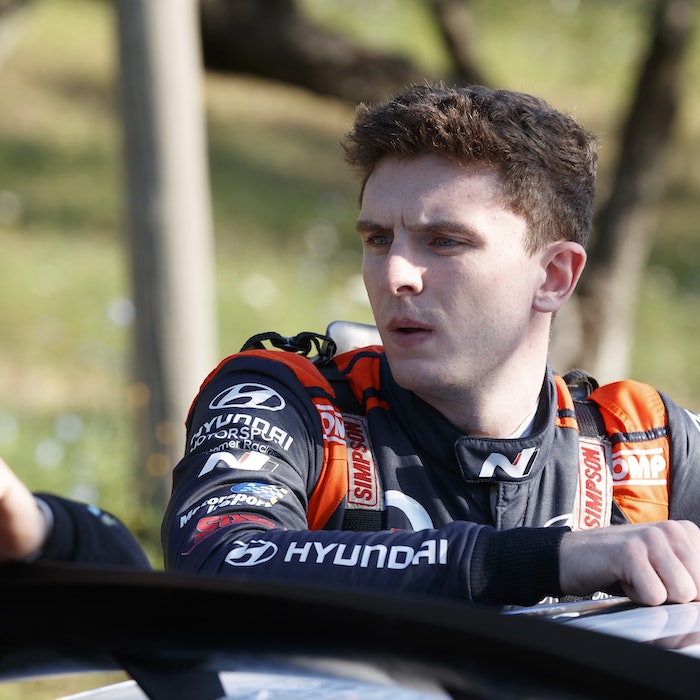 Obviously we had a grip advantage let's say over the top guys but we'll take a WRC stage win when we can! Josh McErlean

“My main concern was that it was dark, there were no lights. There weren’t street lights and we didn’t have the lamp pod either but it worked OK, obviously.”

It was also a stroke of luck that his car was even working properly on the streets of Porto. It hadn’t been for most of the day.

“We’ve been managing an issue all day and after a certain point in the stages we kind of had to stop and reset the car, but this stage wasn’t long enough for that so it worked out OK.”

That it did. What had helped was the rain that had fallen before the stage began. It was something akin to an ice rink for the Rally1s on wet cobbles. No grip whatsoever.

There was still a light dampness in the air – but McErlean was so far down the order, it was like a different stage altogether once he’d got there.

“Obviously we had a grip advantage let’s say over the top guys but we’ll take a WRC stage win when we can!”

At the opposite end of the scale was Fourmaux. And he spelled out why the early runners – in other words, all the Rally1 cars, had struggled for speed beyond the stage simply drying up a bit.

Yes, McErlean had beaten the lot of them. But so had almost a dozen other WRC2 drivers, most of whom ran immediately after the WRC’s top crews.

“It was the slowest stage I’ve ever done in the World Rally Championship, for sure,” said Fourmaux.

“It was so slippery. I think somebody can walk next to the car in the roundabout on the donuts, it’s crazy.”

Drivers had been complaining about lack of traction in the soft, sandy gravel up in the hills all day. But this? This was another level. Every setting was turned down as low as it would go.

“I didn’t use the hybrid on this one because, pfff, there was enough power, for sure too much, so I also reduced the [engine map] power just to make sure to try to get traction.”

It might not be how McErlean envisioned getting his first ever WRC stage win. Some might say it shouldn’t even really count – he lucked out with road order on a stage that removed most of the performance advantage of a Rally1 car over its less powerful subordinate.

But the history books – or should we say the eWRC archives – don’t lie. On a Saturday night in Porto, the WRC’s fastest drivers suddenly had to take a back seat to its supporting act.

However it comes, a win is a win.

Nothing to see here? Perhaps it’s time to stop giving superspecials such a hard time.