Ken Block scored his first American Rally Association presented by DirtFish National victory of the season and first in a Hyundai i20 Coupe WRC on the Oregon Trail Rally.

Subaru Motorsports USA’s Brandon Semenuk was 55.4 seconds behind at the end but finished second to protect his championship lead, 14.2s ahead of team-mate Travis Pastrana.

Pastrana led the three-day Oregon event after the two superspecial stages at Portland International Raceway, but it was Block who dominated the first day with a clean sweep of the leg’s eight stages.

Both Subarus of Pastrana and Semenuk were slowed by power issues that restricted their speed in the morning, but even when restored to full health the WRX STIs had no answer for Block’s i20 Coupe WRC as he constructed a 59.3s advantage.

The final day was therefore about conservation for Block and he duly lost a bit of time to Semenuk throughout the day, but victory – his first at Oregon Trail – and second on the powerstage were vital points to really ignite his championship campaign.

Semenuk, who has won both the 100 Acre Wood and Olympus rallies already this season, began Sunday dead level on time with Subaru stablemate and reigning ARA National champion and actually fell behind after the day’s first test.

But the Canadian had the measure of Pastrana thereafter to pip him to second spot, although Pastrana did take honors on the Starveout powerstage.

Tom Williams secured his third RC2 class win in as many starts this year, marking himself out as a clear class title favorite behind the wheel of his Ford Fiesta Rally2.

The job was made easy for him in Oregon though as his only rival, Kyle Tilley, crashed out on the very first superspecial and wouldn’t restart on either of the following two legs.

Dave Carapetyan had held fifth overall for the vast majority of the event when L4WD rival Jeff Seehorn, returning to ARA action after a year away, retired with a lack of power in his Subaru.

But he had been closely chased by O2WD competitor Derek Nelson’s Subaru BRZ and was cruelly overhauled on the very last stage; Nelson edging Carapetyan by just five seconds.

Both drivers would however top their respective classes.

Patrick Gruszka had been locked in a close battle for seventh practically all rally long with George Plsek, but when Plsek failed to make it out of SS13 the Mitsubishi Mirage was left clear to settle the spot, finishing up a mere 6.8s adrift of Carapetyan.

David Clark (BMW M3) and Seamus Burke (Ford Escort Mk2) were eighth and ninth and rounded out the O2WD podium, while Brad Morris got through to finish 10th.

Albert was slowed on the first morning with fuel mix problems which gave Toyota RAV4 driver Perusina a lead of over 20s – an advantage Albert set about reducing across the final day.

With two stages to go, Albert had closed in to just 1.6s behind his prey but a strong time from Perusina on the powerstage gave him a crucial march.

Highlighting just how closely matched the pair were, Perusina won the final stage by just a tenth of a second to cement a hugely impressive victory on what was his first rally in two years. 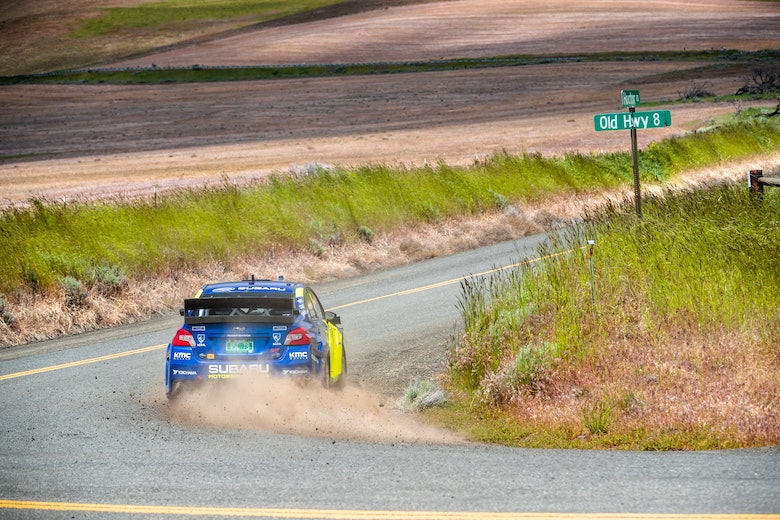 Check out the full results on eWRC-results

Where Sordo made the difference to steal third