The American Rally Association national series is emerging from its lengthy coronavirus-enforced hibernation this weekend with the Southern Ohio Forest Rally.

With safety paramount against the ongoing backdrop of the COVID-19 pandemic, the rally – which was postponed from last month – has been condensed into a single-day, six-stage rally, running from 19:00-02:30 local time across Saturday and Sunday.

A number of safety precautions will be in place. In addition to a lack of spectators, times will be written on whiteboards at stop controls and displayed to crews, while co-drivers will be keeping hold of their time cards throughout the event, depositing them into a bin at the final main time control where they will only be removed in the event of a discrepancy or protest – and with a gloved hand, of course.

There will also be no onsite competitor registration, no public display of the cars in a Parc Exposé and no awards banquet, while all check-in procedures will be done as a drive-thru process. Access to both the service park and stages will be strictly limited to registered personnel.

The restrictions brought about by the pandemic have also allowed for some creativity with the route. As well as the nighttime format – implemented to get around the high temperatures expected during the day – there will be longer stages, the kind rarely seen on this particular event.

Stages from the concurrent Shawnee Stages Regional Rally will be combined to create two stages of 16 and 12 miles. These will feature a combination of 80% gravel and 20% asphalt and, being run at night, are expected to offer a unique challenge to participating crews.

This year will mark the first time SOFR has been a part of the ARA National schedule, having been a Super Regional event last year – won by Adam Kimmett and Dom Adams – and a round of the now-defunct Rally America series in 2017 and ‘18.

The event will not only be Travis Pastrana and Subaru’s return to the ARA National series, Subaru again having elected to skip the season-opening Sno*Drift rally back in January, but it will also mark the factory team debut of new signing Brandon Semenuk. The multiple mountain bike world champion joined the team in the off-season, effectively replacing 10-time US rally champion David Higgins.

On the Pastrana side of the Subaru service area, things will be a little different, yet familiar.

Owing to current UK travel restrictions, Pastrana’s regular co-driver Robbie Durant has been forced to remain at home. His place will be taken by Chrissie Beavis, who partnered Pastrana throughout the 2014 and ‘15 seasons.

The blue and gold WRX STIs won’t be the only star attractions in the field though. After an engine rebuild and an external refresh, Ken Block is returning in his popular 1994 Ford Escort RS Cosworth alongside long-time co-driver Alex Gelsomino.

It’ll be Block and Gelsomino’s first US domestic start since the 100 Acre Wood Rally in March last year and their first full rally since Rally Mexico in March of this year, both of which were also in the ‘Cossie’.

Another Mexico participant returning is Barry McKenna. The Irishman won Sno*Drift in his usual Ford Fiesta R5 alongside James Fulton, but for SOFR they will be campaigning a Škoda Fabia R5, the same car they ran in Mexico. This will mark the first time a car from the Czech manufacturer has run in US rallying’s premier class, with Škoda products not being sold, let alone seen, on American shores.

Pat Moro is also back for the first time since last October’s Lake Superior Performance Rally in his wild V8-powered Chevrolet Sonic. He had a steady run climbing through the field in that last outing before retiring on the 12th stage. He’ll be hoping to end the Sonic’s poor luck this weekend.

After just 17 entries registered for Sno*Drift, rallying’s extensive layoff in the US has left many eager to get back to it. As a result, there’s a healthy entry list, not just in the premier Open Four-Wheel-Drive class, which boasts 12 cars.

In Open Two-Wheel-Drive class there will be 14 cars, while NA4WD will have 15. L4WD and L2WD will have nine and eight cars respectively, while five cars will start in the RC2 class. 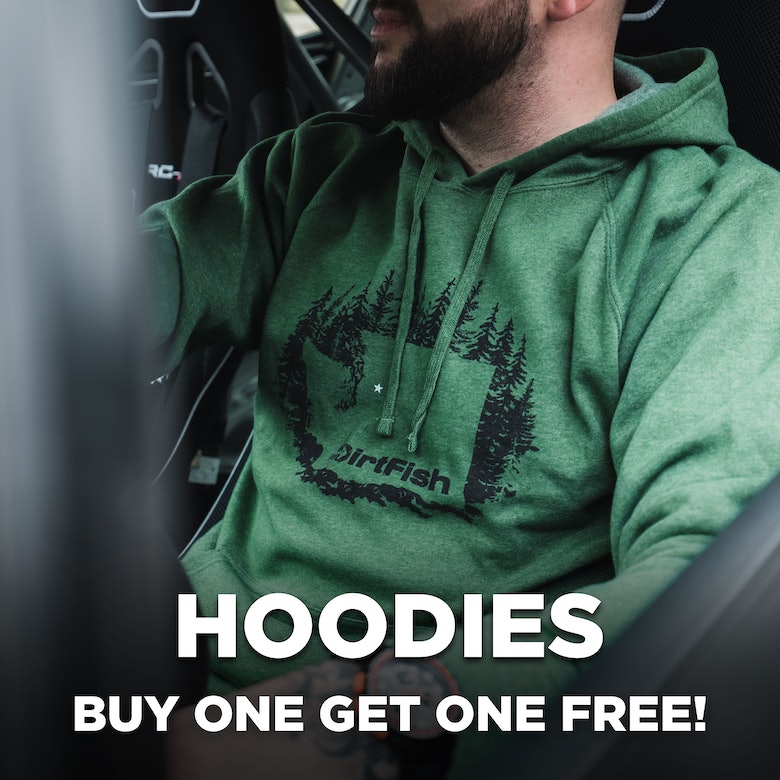 DirtFish SALE! Grab two hoodies for the price of one