If you were around for the podium celebrations at Sunday River after the New England Forest Rally, you know that the word of the day is “dust.”

The final stage, North Road, which was also the Power Stage, had early reports of dust impeding on teams’ rallies as soon as cars started reaching the finish.

But dust is just part of rallying surely?

That’s what I thought, but as more people returned from the final stage, it became clear that this wasn’t just a bit of dust making things a tad difficult, this was blinding clouds that still lingered after two-minute gaps.

“We couldn’t see five feet in front of us,” DirtFish photographer Josh Sikora, who was at the flying finish of the stage told me.

There’s only one photo we have from that stage as well, because in the dust you couldn’t see the cars after anyone had been through.

Ken Block and Alex Gelsomino, who were on second on road, had complained about the dust to the Clerk of Course earlier in the day and requested that the gap between cars be lengthened, but the request was turned down.

Block was not silent about his displeasure with the way the situation was handled. 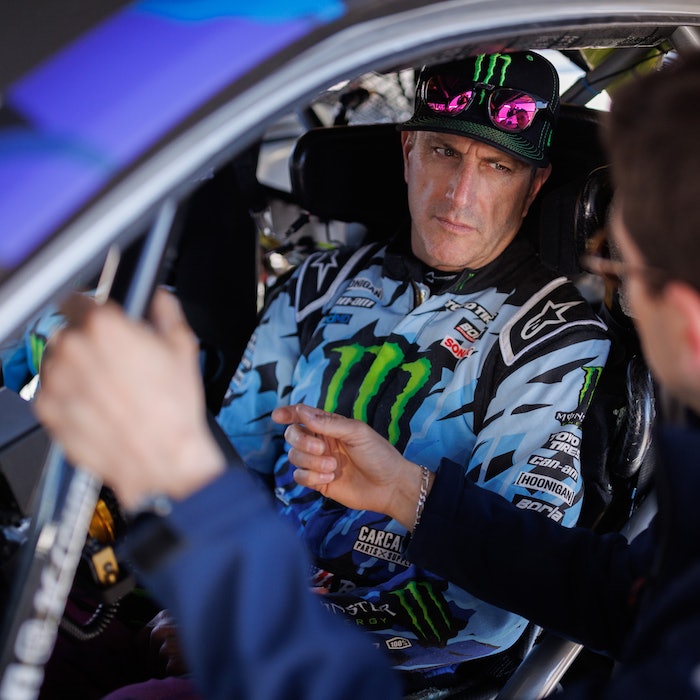 I am bitter, I hate to be the bitter second place guy, but man… Alex and I put our life on the line today to get the lead and got robbed in the end

“You want the truth?” he asked into the microphone at the podium presentation, “I’m not happy with second.”

“Unfortunately, dust ruined our rally here at the end. It was a great battle with Travis and Brandon, Brandon drove his ass off.

“I am bitter, I hate to be the bitter second place guy, but man… Alex and I put our life on the line today to get the lead and got robbed in the end.”

Block thanked the volunteers and gave credit where it was due to the incredible roads, but he made sure to speak his piece.

It wasn’t just Block who encountered issues though. While he had been the most outspoken, dust became a real problem for just about everyone on the Power Stage.

Travis Pastrana told DirtFish, “Ken Block and Alex Gelsomino went through sheer clouds of dust where we couldn’t even tell if we were on the road. Huge testament to their commitment and their notes.

“We put on a fairly good run through there, I was charging but it was completely black from the dust.

“I think bigger gaps on the Power Stage would be great, but that’s always a dusty stage, and there’s so many rocks, it’s so easy to go off on, which is even another testament to going through the dust completely blind and nailing your marks all the way through.”

The one-minute gap the majority of the field usually gets was increased to two after the first few cars went through, leaving some arguing that the gap should have been increased earlier in the field.

It wasn’t just the fastest cars that had issues either, many teams kept coming into Parc Fermé saying they could barely see anything on stage and had to simply trust the road was still there.

As on-board videos from competitors started to come in, it also becomes apparent that the dust was sticking far too long, and visibility was extremely limited.

Make no mistake, Brandon Semenuk put in a perfect weekend and showed some of the greatest driving the ARA has ever seen behind the wheel of his WRX STI. It’s an extremely well-earned win from one of the sports best drivers. Getting first on road means sweeping stages as a disadvantage but having a clean view as an advantage. That’s just how it goes.

When dust becomes blinding, however, that creates obvious safety issues for competitors. Drivers are pushing to the absolute limit of their abilities, and if they can’t see, not only does that impede their ability to do so, but it makes it far easier for them to make mistakes that could have dangerous consequences.

DirtFish has reached out to the New England Forest Rally officials for comment but have not received an official statement as of yet.