Subaru Motorsports USA driver Brandon Semenuk is concerned that his team-mate Travis Pastrana already has one hand on the American Rally Association presented by DirtFish National trophy after scoring his third win in a row last weekend.

The winner of both the Sno*Drift and 100 Acre Wood Rallies, Pastrana and his co-driver Rhianon Gelsomino began the DirtFish Olympus Rally chasing an unlikely hattrick.

Their quest was boosted when Barry McKenna and Leon Jordan had to pull out on the eve of the rally, but with Ken Block and Alex Gelsomino running an identical Subaru and Semenuk and John Hall’s strong turn of pace, they knew they didn’t have it easy.

But ultimately Pastrana went on to record victory by over a minute from Block as Semenuk crashed out on the notoriously slippy Wildcat stage that concluded the first day of action.

Up until that point, Semenuk had been just 3.6 seconds behind Pastrana and going quicker through the initial splits.

Now with an early 37-point championship deficit, Semenuk is aware that “the only thing to do is really go flat out” for the rest of the year “and I’m sure everyone’s thinking the same thing”.

“At this point in the year Travis is looking like he’s going to run away with it,” he added.

“I’d love to take an event win this year y’know. I know we’re only a couple events in but I feel like we’ve been pushing hard and trying hard.

“[Southern] Ohio’s going to be a really tricky event, I don’t see that being in our favor, but we’ll definitely push and try and keep the pace up.”

I think he was really feeling like this was an opportunity for him so hopefully he's not too discouraged Bill Stokes, Subaru Motorsports USA motorsports manager, on Semenuk

Describing the incident that cost him dearly last weekend, Semenuk said: “Heading into Wildcat I thought it was going to be a good stage for us to make a push and create a gap coming into [Sunday].

“I thought we had slowed down enough [for the bridge], the car just kinda skated a bit wide, and the front got on but the rear just got on the loose and that was it.”

“Just too far and the rally is over.”

Semenuk wasn’t alone in having troubles in this area, as the 00 safety car had an off in the same spot and hit the side of the bridge head-on.

“It was definitely a gotcha moment,” Semenuk added.

“There were a couple cars that did exactly what I did, I just didn’t get entirely on the bridge. They got fortunate enough to get onto the bridge before hitting and they just kinda bumper pulled across the bridge.”

Subaru Motorsports USA motorsports manager Bill Stokes was disappointed to see Brandon’s car pulled from the competition, but was encouraged by the Canadian’s pace.

“[Brandon] was showing some serious pace,” he said, “it was looking like he was chasing down Travis for the lead so [it was] really encouraging pace from him.

“I think he was really feeling like this was an opportunity for him so hopefully he’s not too discouraged, we want to make sure he maintains that momentum going into the next six rounds for the rest of the season.

“But overall he’s doing really, really well for us and the pace is coming so he’s going to continue to get quicker as we go.” 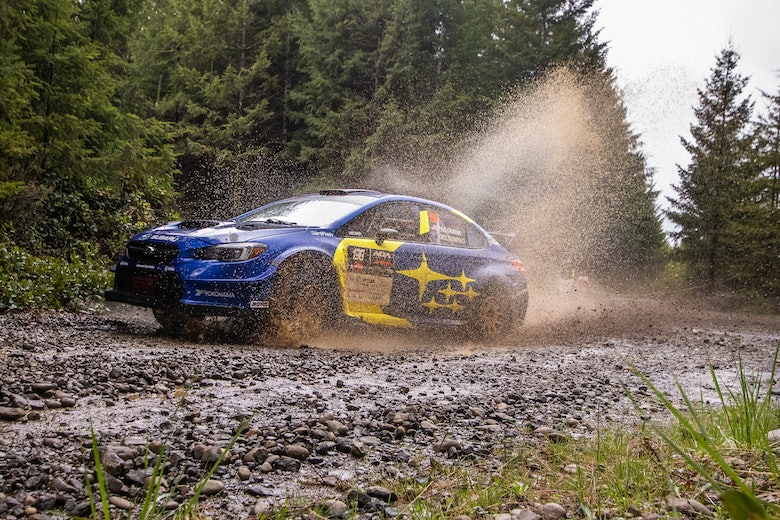 Can Pastrana be stopped?