Quite often when a rally championship updates its technical regulations, anybody that chooses to open the document will be glazing over after just a few minutes of reading it. Unless you’re a certain way inclined, examining fine print isn’t generally the most enthralling of pastimes.

But every once in a while, something will crop up that is not just interesting but vitally important too. Take the updated American Rally Association regs for 2021 as an example which, if you’ll pardon the forthcoming pun, have sparked a lot of debate among competitors on social media.

Fire in motorsport is a topic that is perhaps more prevalent than ever following Romain Grosjean’s miraculous escape from his burning Haas Formula 1 car in last month’s Bahrain Grand Prix. However it’s not just at the very top of motorsport where they can be a problem, nor are they always as dramatic as Grosjean managing to cheat death as he clambered out of a car that had split in two.

Indeed a fire can, within reason, break out at any time so ensuring that all precautions are in place to firstly reduce the risk of one occurring and then protecting any occupants of a competition vehicle that is ablaze as best as possible are paramount. See the new-for-2020 five-layer race suit and the immediate reaction of F1’s medical car in Grosjean’s incident.

Fires are certainly commonplace in rallying. Just this year, Esapekka Lappi lost his Ford Fiesta WRC to an inferno in the World Rally Championship, while America’s WRC3 crew Sean Johnston and Alex Kihurani suffered an engine bay fire too. 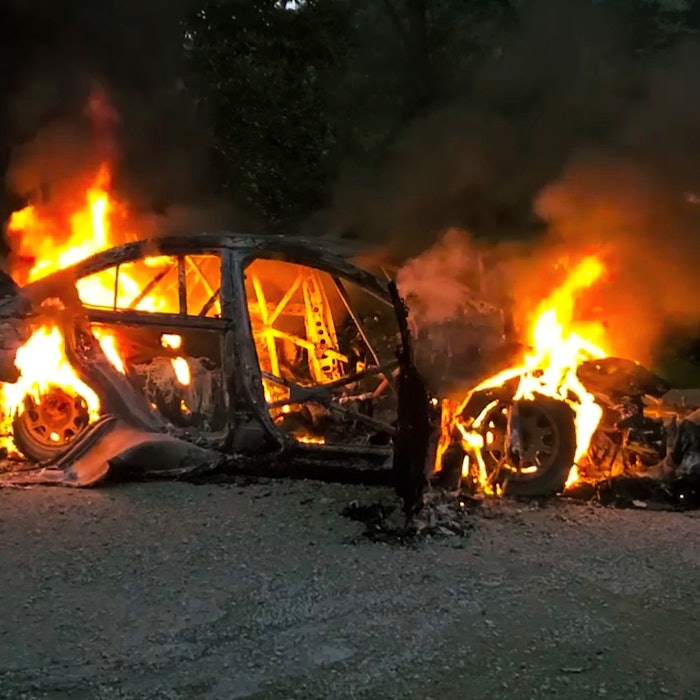 And in the United States itself, who can forget the sudden inferno that engulfed Travis Pastrana’s Subaru WRX STI on the Southern Ohio Forest Rally, or the fire that burnt out Ken Block’s original Ford Escort ‘Cossie’ on the 2018 New England Forest Rally?

ARA organizers certainly haven’t forgotten, and it’s why the updated championship regulations now mandate that, from June 2021, all competition vehicles must be equipped with fire estuinguishers that meet specifications that can be viewed here. The intention of this is simple: to update the safety standards and requirements.

“What we have seen looking at the data over the last two years is we’ve been averaging nearly a fire every single race,” ARA Rally Series competition director Preston Osborn tells DirtFish.

“And fires of course are one of those things that apply to pretty much every competitor just because there’s such a wide variety of reasons a fire starts. A lot of people just see the exciting ones either at the race or on YouTube or something of a car crashing or catching fire but generally those are not how fires start.

“Usually it’s mechanical issues; anything from engines, we’ve seen rear diffs cause fires, of course electricals. Some people have said ‘why don’t you apply this [rule] only to the National cars?’ and while I completely get where they’re coming from, the fires, they affect everyone so this is the type of ruling that everyone’s going to be using.

“And at this point with what we’ve seen over the last couple of years, we’ve got well publicised fires like Travis of course, his car going up in flames at Southern Ohio this year and Ken Block a couple of years ago with his ‘Cossie’ and you see those but you don’t see all the ones middle and back of the pack just because they’re not as public.

“And frankly we have been very lucky that we haven’t had more severe situations as far as people getting burns or worse and obviously our priority is doing everything we can to keep the competitors safe but we still have to be mindful of budgets and the burden to the competitors.”

So where’s the debate? Why is there any potential uproar about ARA organizers vying to make rallying safer in the US? Surely those that are to chiefly benefit from this pursuit are the competitors themselves?

Osborn’s final point about budget is the crux of it. Facebook groups have been alive with discussion about this and the budget outlay required to fit these systems. While for the Barry McKennas of this world, affording one of these isn’t too much of a stress, but the same doesn’t apply to an ARA Regional competitor who is going rallying on a much more modest budget.

“I think that was the initial push back we’ve seen, the cost of it,” Osborn admits.

“But I think a lot of that required education more than anything because when you do a quick search online, the first ones coming up are $1500 systems which, obviously have their advantages and are great whether it’s the actual fire extinguishing material in there.

“But you can get a pretty budget system that still meets all of our rules. We require them to be SFI certified and under the FIA Rally Certification, and those are $400. Obviously everyone has a budget from the top of the field to the back of the field, and I feel that for $400 the benefit that it gives to the safety of the competitors is huge.

“Obviously the FIA is able to do a lot more research and testing and all sorts of different things to decide what is best for the safety of the competitors which frankly we’re just not able to do,” Osborn continues.

“We have SFI out here and obviously we can use a lot of their specifications for the fire system that’s required for next year but at the end of the day there are people putting a lot of investment of time and energy to figuring out how to keep competitors safe and bottom line is that’s my number one priority.

“Most of these competitors are my friends since I have been competing with them for the last 10-plus years so the absolute last thing I want is to see one of them get hurt in a fire or crash, whatever it is. So that’s what I’m really looking at.”

DirtFish understands that potentially under half of ARA Regional competitors currently don’t have an adequate extinguisher system fitted to their cars but well over 50% of National competitors do; thus highlighting the budget point even further.

However, upon listening to feedback from several drivers, Osborn has decided that the new regulations which were supposed to be enforced from January 1 will now be pushed back to June “just to try and give those competitors more time because I’ve had a lot of competitors reach out and they’re saying it’s a burden for the first couple races of the year”.

“I think I underestimated what we considered a relatively minor change because you could do it for less than $500,” Osborn adds. “But I have competitors telling me that it’s affecting their season and obviously I want to keep them safe but at the same time I don’t want to affect the racing organizers nor the competitors.

“I think the difficulty with a series like ours is you have professional racers out there at the same time as grassroots guys. So when I’m trying to make decisions on how best to direct the series, weighing two very, very different groups can be difficult at times.”

It’s refreshing to see a series willing to listen and act upon feedback though, and ultimately despite the initial expense, you can guarantee those competitors that were perhaps initially sceptical about the expenditure required will be thankful one day for having an up-to-scratch extinguisher system fitted to their vehicle. 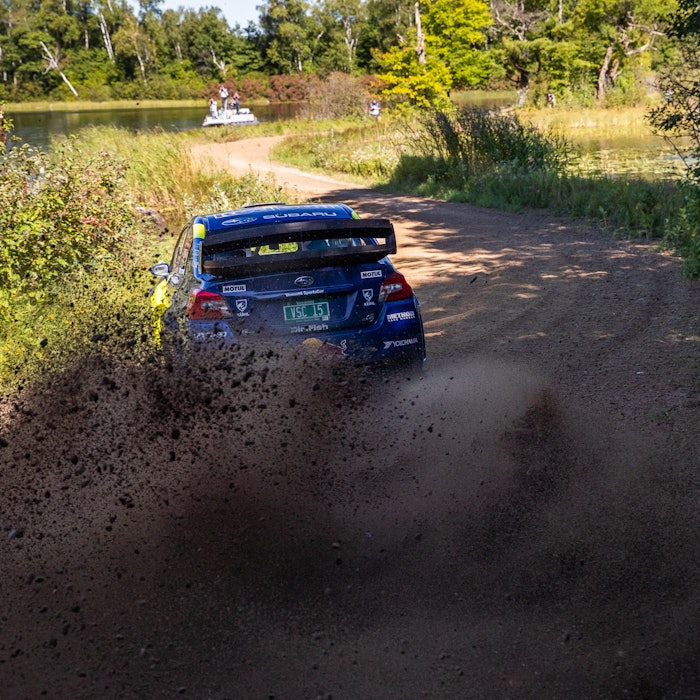 HOW ANTI-LAG BECAME THE HOT TOPIC IN ARA

This reactive and approachable tactic extends beyond fire extinguishers too, as the updated technical regulations also finally put the fresh air valve issue firmly to bed; again because of competitor feedback.

First arising on the eve of Ojibwe Forests Rally in August when a competitor lodged a clarification request against the part – which, when fitted to a turbo, dumps fresh air into the exhaust stream to help keep the turbo spinning when the driver is off the throttle.

Both eventual National champion McKenna and the Subaru Motorsports USA drivers Pastrana and Brandon Semenuk had been using the system in their cars throughout the year, but no penalties were handed out as the old technical regulations didn’t explicitly prohibit them. Instead, competitors were asked to not run the part for the rest of 2020.

However, as predicted by DirtFish, the systems will be fully legal from next year.

“We had a lot of discussions about it of course mid last year, coming towards the end of this year and we ended up talking to a lot of competitors who this rule was going to affect,” Osborn says.

“So of course Subaru and McKenna but we even reached out to some of the other Open class cars like Jeff Seehorn and Sam Albert because they had asked about these systems before as well. And really the consensus was the competitors wanted it.

“We’ve had enough competitors asking for it that I didn’t see a reason why we couldn’t allow it into the rules.”

Some further tweaks to the ARA regulations are expected in due course, but the first batch was unleashed now as they were the ones that required competitors to significantly invest.

The first round of the 2021 ARA season is the Sno*Drift Rally on February 20.