The penultimate round of the 2021 American Rally Association presented by DirtFish National Championship will take place this weekend as Lake Superior Performance Rally returns to the Upper Peninsula for the first time since 2019.

While the round was canceled last year due to COVID-19, it’s back – and the town of Marquette is ready to play host to what is sure to be a unique weekend of rallying, and an exciting return to racing for the region.

Sit back as DirtFish takes you through everything you need to know about the 2021 Lake Superior Performance Rally.

Few, if any, rallies in the US can claim to have as much history as LSPR. It started off life in 1949 as a time-speed-distance rally known as “Press on Regardless” – a moniker that has become the motto of US rallying since.

In 1969 Press on Regardless transformed into a stage rally like we’re used to it being today, and by 1973 it was playing host to the World Rally Championship, although it’s time on the schedule would be short-lived ending in 1974.

The Press on Regardless Rally ran as a stage event until 1994 when it returned to TSD, but in its absence LSPR was formed to continue running the famous stages.

With over 70 years of history, there have been plenty of big name wins at LSPR, with the most going to John Buffum with six, while Paul Choiniere, David Higgins, and Rod Millen are all tied with five.

Press on Regardless was known as one of the toughest rallies in the world, and while LSPR is different, it still runs on many similar (and sometimes some of the same) roads as POR did, ensuring mechanical failure to be on everyone’s minds as they hit the stages.

LSPR being run so late in the season is also known for it’s weather challenges, often switching from dry and sunny, to cold and rainy in what seems like an instant. This round has also experienced snow on stage, so drivers never know exactly what to expect as the weekend progresses.

While LSPR didn’t run in 2020 because of coronavirus, in 2019 Oliver Solberg, David Higgins, and Barry McKenna battled for top spot.

Solberg and Higgins were of course in their Subaru Motorsports USA WRX STI rally cars, and McKenna behind the wheel of his Ford Fiesta S2000. 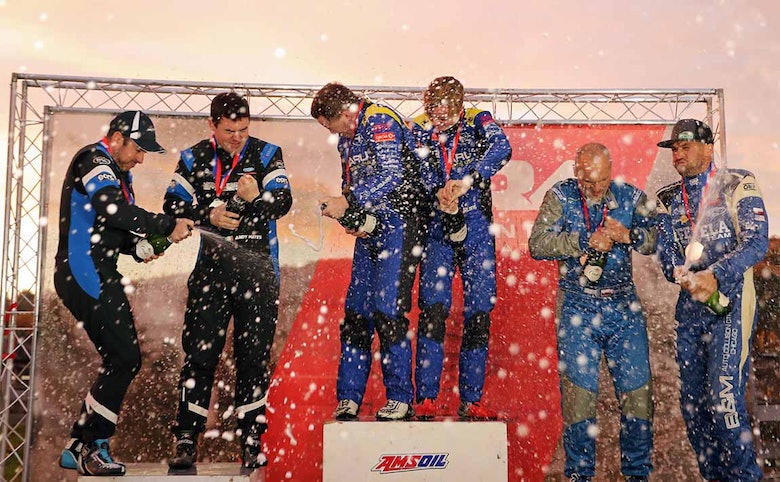 While Higgins lead the first four stages, he got stuck on a tree stump and suffered a mechanical on SS5, letting teenage team-mate Solberg take over the lead.

In the end, Solberg was able to take the overall win on the event with McKenna in second and Piotr Fetela taking the final podium spot in his Fiesta Proto car.

Higgins and Solberg finished the 2019 season tied at three wins each after LSPR, and since it was the final round that year, teams were able to start preparing for the 2020 season ahead.

While Subaru Motorsports USA and Barry McKenna are absent, there’s still plenty of talent left in the 64-car field.

First and foremost, Ken Block will still be competing in the Vermont SportsCar-built WRX STI, and though largely uncontested in his caliber of vehicle, 2021 2WD Champion Seamus Burke will be behind the wheel of an O4WD Lancer Evolution IX that could play spoiler if things work in his favor.

Briton Tom Williams returns after his US debut last time out at Ojibwe, once again competing in a Ford Fiesta Rally2 and his RC2 class competition will include Joseph Burke, who has shown incredible pace in the car this season despite many breakages and unlucky DNFs.

As per usual this season, LN4 competition will be packed. The ongoing title-battle between Ele Bardha and Mark Piatkowski will be at the forefront of things to pay attention to, as Will Graham, Dave Carapetyan, Arek Bialobrzeski and many more top drivers in the class try to the the points for themselves.

Two-wheel-drive cars are plentiful at LSPR this year too with Al Dantes Jr’s famed V8 RX-7 competing, as well as US rally legend Tim O’Neill in his 1969 AMC AMX.

LSPR in 2021 will be a bit over 122 stage miles taking place over two days. There will be eight stages on Friday, and seven on Saturday for a total of 15.

Competition on Friday will begin with a ceremonial start at Fox Subaru at 11am, and will run well into the night as drivers battle all the way until MTC 2, scheduled at 11PM.

Saturday will see drivers hitting the stages around 10am and run until about 5.30pm.

Spectator points are available on 10 of the 15 stages, including SS14-15, both of which are super specials at Mount Marquette, and the Marquette Mountain Resort ski hill – the former of which is a throwback all the way to the 1970’s WRC-era POR rally.

Monza to include fewer circuit stages in 2021