Toyota’s latest rally car isn’t coming out of a workshop in Finland and ripping up the World Rally Championship stages, but instead from the company’s North American branch and with an event debut in the American Rally Association’s DirtFish Olympus Rally.

This is story of the 2020 Prius AWD-e, and the thoughts of the man in the driving seat: 14-time X Games gold medallist Jamie Bestwick

Written into the competitor list as a NA4WD class entry, BMX icon Bestwick’s presence at the Olympus Rally left some people confused, not least because he was driving a hybrid Prius. But also because his name never appeared on the timing sheets, he was an exhibition entry.

The car itself was near stock, with little more than a cage being added for safety, and a classic Toyota racing stripe style wrap for a more eye-catching look.

With 2020 marking the 20th year of Toyota selling its most famous car in the United States, Toyota engineers wanted to both celebrate one of the brand’s best-known models, and carry out motorsport-based research and development at the same time.

Toyota engineer Kyle Steinkamp is no stranger to this, having done similar testing on other Toyota projects such as the Matrix XRS and the Corolla iM.

“I’m the cook,” Steinkamp joked when asked about his role in the team. “I’m a project manager for the vehicle for the race side of things.”

North American Toyota R&D teams have been involved in stage rally since about 2006, often starting with standard vehicles to test factory parts before potentially moving more toward the performance side of things. Steinkamp says his team would like to continue to develop the car in this way despite its current lack of modification.

“As of right now it’s pretty much how it comes from the factory. Hardware-wise, even software-wise it’s very similar, we’ve made very few performance improvements.

“We’re interested in experimenting a little more with this hardware, and just doing software tweaking to increase the duty cycle a little bit, and exploit the performance more targeted towards the rally race.”

Though the engineers would be interested in running the car more competitively, right now it would be difficult to find good competition. Being that the Prius’s AWD-e system centers around a 7bhp motor powering both rear wheels up to just over 40 mph, it’s hardly similar to any of the typical NA4WD entries, but since the rear wheels are still powered it can’t enter the NA2WD class.

“We’d love to have some serious competition,” says Steinkamp. “It’s kind of a question right now what class is best.”

Beyond this, the ARA doesn’t have any rules outlining the eligibility of hybrid drivetrain systems and whether or not they could fit into one of their classes.

Bestwick echoed this idea saying that the Prius presents an interesting problem to the ARA that could become more prevalent in the coming years when more consumer vehicles incorporate electric power.

“I think [the question is] what the ARA does beyond this,” says Bestwick. “Because this is brand new, and they really haven’t kind of found a way to insert it into their rally car schedule, this is kind of a test too for them. With the development of AWD-e cars, you’re only going to get more manufacturers wanting to come play in rally car races.”

Despite this, Steinkamp and the rest of the team are excited to be getting some hard testing done on the project.

Though the Prius was only running as an exhibition, the fact it stayed together on the harsh stages of Olympus can be seen as a victory for the team. Considering recce alone managed to kill three cars at the event, a bone stock commuter car holding up to being driven at pace is nothing short of impressive. 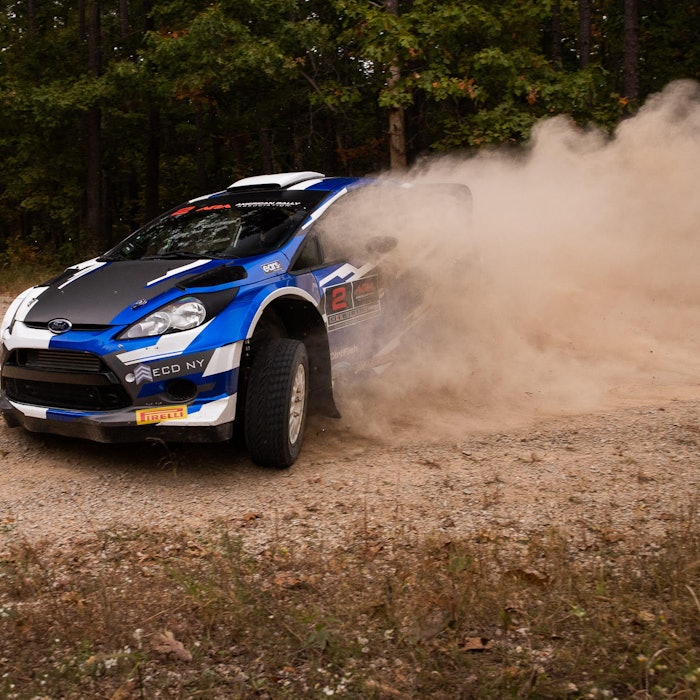 BANNED ARA TURBO PART EXPECTED TO BE LEGAL IN 2021

And that’s exactly what Toyota wanted, to show “that the Prius is beyond all its attachments that it has; the energy efficient car, the choice of car for the person who sits on the 405 in LA for 9 hours a day”.

Bestwick, while best known for his ability on two wheels rather than four, has a grounded understanding of what a good car feels like to drive, having done a bit of racing in the past.

“I think the Prius is always looked at as this great flagship model for Toyota, and it serves its own purpose, but with the all-wheel-drive car we a wanted to show, ‘hey, you know what? We can stick this in a rally and go have fun.’

“Surprisingly the car is so stable, and we get a really good hole shot off the line.”

The holeshot is no doubt bolstered by the Prius’s electric motors, allowing for low-end power where the standard four-cylinder engine might lack.

Those quiet electric motors may have nearly gotten Bestwick into some trouble on the first day of the rally however, when a fully grown deer was standing in the middle of the road as Bestwick rounded a blind corner at speed.

“I guess being quiet has its disadvantages,” Bestwick said of the near incident.

Despite being used for R&D purposes and as an exhibition car, Bestwick says the team is taking everything seriously and running as though they were competing.

“It’s important for these guys because they spent money and time and effort building this thing and they just want to come here and do it right, and not just look like those guys that showed up and [said] ‘hey, we’ll get some cool shots.’”

Bestwick noted that the rally did seem to be very difficult for many competitors, stating that there were a few cars that weren’t even able to make it off the starting line, as well as a few places on the road where tire tracks seemed to tell a story.

“You see tire tracks that mysteriously aren’t on the racing line,” Bestwick joked. “I don’t know if it’s like a Super Mario World thing like where if you go between the trees you come out at the gold mine at the bottom, but I don’t want to try that!”

Overall, Bestwick’s experience at the event was excellent, from the people on his team, all the way down to the volunteers that made it possible.

“The support staff are amazing at all the ATC’s and the start lines. They’re such great people, so it’s been a pleasure [to be here].”

Although it doesn’t appear Bestwick will be back for any more rallies in the future, he clearly was able to get into the spirit of rally, and enjoy himself during his time at Olympus.