Craig Breen was denied an emotional win on Killarney Historic Rally as his ex-Frank Meagher Ford Sierra RS Cosworth broke a driveshaft at the arrival control of the final stage.

Breen, who won the Killarney event last year at the wheel of a BMW M3, was reunited with Paul Nagle – who has retired from co-driving Breen in the World Rally Championship – and was embroiled in an intense battle with eventual winners Jonny Greer and Niall Burns prior to his driveshaft fault.

The mechanical failure was a truly gutting blow for the Irishman, who will not be regularly driving Fords anymore as he returns to Hyundai in the WRC next year, as he was competing in honor of his childhood hero Meagher.

The Irish Rally champion passed away 20 years ago in a testing accident, and was known particularly for his giant-killing efforts in the early 1990s with his rear-wheel-drive Sierra against the four-wheel-drive Group A cars.

Breen has never hidden the fact that Meagher was his favorite driver as he grew up, and so couldn’t resist the opportunity to pay tribute to his hero on Ireland’s annual big-ticket historic event. 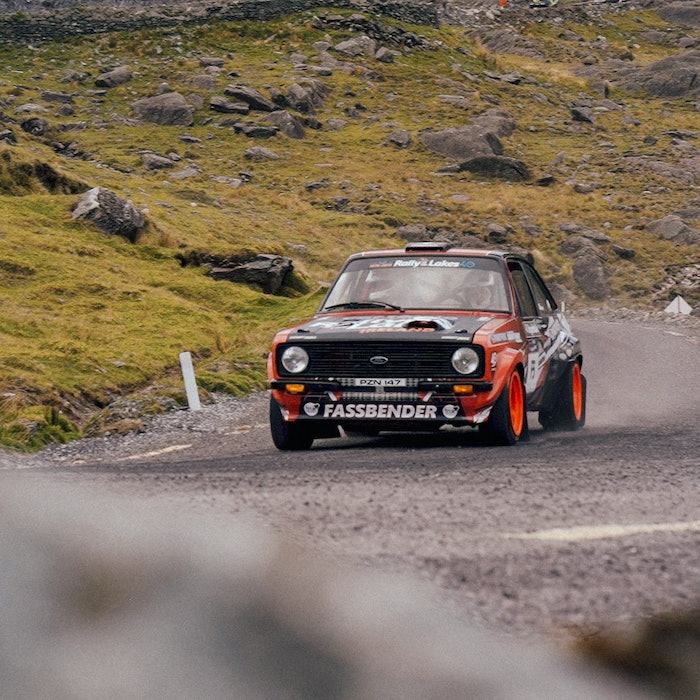 FASSBENDER'S FILM ABOUT RALLY OF THE LAKES

With the help of Tom Gahan Motorsport, he completed a stunning restoration of his ex-Meagher Sierra to contest the Killarney Historic – with detail even stretching to Breen wearing the same driving suit that Meagher did 30 years ago.

Breen was quickest on the first of three runs over the iconic Molls Gap, but immediately it was clear that he’d have a race on his hands with Greer as the pair shared the lead after SS2.

This year’s Northern Irish Rally champion Greer moved his Q8-liveried Sierra into the outright lead after stage three of seven, only for Breen to hit back and reclaim first place on SS4.

But, having also borrowed a differential from his rival Greer, an issue with first gear then restricted Breen’s pace and allowed Greer to close in.

The stage couldn’t have been better set ahead of the final attempt of Molls Gap, as Breen and Greer once again couldn’t be separated at the top of the leaderboard.

Breen had been quickest over the first two passes of Molls Gap but wouldn’t get the chance to defend that honor as he parked his Sierra 200 meters after the in-control for the final test.

“Sorry to see for Craig, that was a good battle all day so a shame for it to end that way,” said Greer after taking a well-deserved victory.

“We’ve had quite a good season this year in the Northern Ireland Rally Championship but this is my first victory down south. We had a great run today – it’s our first attempt now with this car and yeah… we got there in the end!

“It’s a bit of a surprise but a good surprise.”

Alan Ring finished second in his ex-Ari Vatanen Subaru Legacy RS despite an intermittent engine issue towards the end, while Cathan McCourt stole third place from Neil Williams on the final stage with the quickest time in his Ford Escort Mk2.