The last time I spoke to Fredrik Åhlin was all the way back in April 2020.

Working for my previous employer, Motorsport News, the sudden disruption to society as we knew it meant we were on the hunt for as many different features as possible.

I suggested Åhlin might be worth a call as a former WRC Academy driver and stalwart of the British Rally Championship who, at one point, led Elfyn Evans in the 2016 standings before moving into the European Rally Championship.

Expecting to just chew the fat on his career so far, with an onus on the BRC which was of particular pertinence for MN’s British audience, what Åhlin actually told me caught me out.

“I was going to announce this in February but I didn’t want to announce that I was stopping rallying when we are in this global situation, it’s irrelevant,” he said.

“I’m not saying that I’ve stopped forever [but] I’m not going to pull my hair out to try and get the budget again because it’s been 10 very hard years where we always had the stress to find the money.

“I’ve done it, I’ve tried it, I had loads of fun but everything has its time.”

I remember having massive respect for Åhlin’s choice to keep that announcement on the down-low and not light up social media with it at a time where everybody was feared by the global COVID-19 pandemic.

But there was also a sense of great sadness that consumed me that, at 28, his career was already over. At his pomp Åhlin was one of the most exciting drivers around – fittingly bowing out on top with a win on the 2019 Rally Blekinge ahead of World Rallycross champions Johan Kristoffersson and Mattias Ekström.

But chasing the dream can take its toll and it was very clear Åhlin just didn’t want to gamble it all on becoming a professional rally driver anymore.

That, it seemed, was that. For the next two years the Swede has kept himself under the radar. Up until last week, his latest Instagram post was three years old, announcing that his Škoda Fabia R5 was for sale.

You can imagine my surprise then when I saw Åhlin’s now latest post, announcing the news that he and Joakim Sjöberg would be contesting next year’s Swedish Rally Championship with Team Nybe.

It turns out I wasn’t alone.

“I’m actually as surprised as you are to be honest,” Åhlin tells DirtFish.

“Like you say, I retired in 2019 from professional rallying, trying to get to the top as I didn’t have the motivation to find the teams, the money, the sponsorship and so on.”

But a call from Mattias Bengtsson changed everything.

“From the beginning I think I was supposed to be a kind of driver coach or engineer helping out. But the more we talked the more he maybe liked my thought process and how I’m used to working within a bigger team.

“They first of all needed experience from someone to come in but the more we talked and the further the discussions went, the idea came up of ‘why don’t you drive a car as well?’.”

Finances were soon sorted, but Åhlin then had another important call to make.

“I called Joakim because that was also the main thing to get him alongside me,” he says. “He also retired, he did the last year with Tom Kristensson in 2020 and won the Junior WRC with him and then he also retired from professional rallying.

“I called him and we both were feeling that this kind of works out. It’s not a European championship calendar with 10+ weeks away from home and the family, the Swedish championship I think we’re going to do the five rounds and maybe two test rallies, maybe we are looking into do the Rally of Scandinavia, the ERC round, which is based in Karlstad where I live.

“OK that one will be a week but otherwise we’re talking maybe going from home Thursday, do the recce Friday and then do some stages the Friday night and you finish the rally on Saturday which is more handleable.

“You don’t have travel days in the same sense, you don’t have to be so much away from family and work. He thought that sounded nice and fun, so when he said yes, I said yes, and here we are.”

But why now? What is it about this opportunity that has convinced Åhlin to come back?

I've not been missing driving. I actually haven't even thought about it. Fredrik Åhlin

First of all it’s important to understand that Åhlin never actually lost his love for rallying. In fact, he’s remained actively involved throughout the last few years in both rally and rallycross, just not from the driver’s seat.

“I’ve been involved as a bit of an engineer/driver coach and it’s been a lot of fun – you are still in motorsport, you get the team spirit with all the mechanics like it was back in the days,” he shares.

“The only thing is I am not driving myself but when you are working together with someone you are competing as much as they are, at least in my mind.

“So I think that was let’s say not the best of two worlds – the best of two worlds is what I’m having right now – but for that moment not having to find the money to do it, maybe actually making a dime or two but still being involved in motorsport and seeing the passion from the young guys, it’s really cool to see how they work and how passionate they are.

“I can really recognize myself when I was 15/16, the passion you have for the sport and those things which were maybe something I was missing towards the end of my career where it was too much pressure to either perform or find the money or whatnot.

“Yeah, let’s say I’ve not been missing [driving]… I actually haven’t even thought about it. It’s like I’ve stopped, I’m not going to try and find the money, I don’t need to prove myself and show I can still drive, it’s never been anything about that.

“But of course when I got the call, driving a rally car is the best thing you can do in the world so of course I was going to say yes.”

Åhlin’s aware of the scale of the mountain he needs to climb though. They say you’re only as good as your last result, but given that win was claimed all the way back in September 2019 Åhlin has a fair bit to catch up on. He hasn’t driven a rally car since.

“I must say I was surprised that someone still had me on the radar,” he admits. “They were looking for a top driver, I’m not sure I am one still – it’s been three years out of a car, that we will see!

“But that’s also one thing, since this has been announced a lot of people have been asking about how it’s going to [be] against PG [Andersson], and there are some other strong names coming in as well probably, and well we’re going to see on the first stage,” Åhlin chuckles.

But don’t mistake that laugh for nerves. Åhlin’s totally unfazed and actually uninterested in contemplating how he might perform.

“It makes zero sense to try and focus on that now or try to… also the fact I haven’t driven for three years, it’s a fact. So why should I even focus on it? ” he says.

“If I’m P5 or P3 or whatever on the first stage, well that means I was driving too slow, so I’m going to focus on trying to drive faster. The reason why I’m too slow is kind of irrelevant in my opinion at that point.

“I mean the only thing I can say right now is last week before this was announced, before we came down to Team Nybe, me and Joakim we actually took three days off work – so Wednesday, Thursday, Friday – and we went out doing recce practice.

“And I hadn’t written a pacenote since 2019 either so we went out and for sure the first half day, the notes, if I was going to use them on a rally I would probably kill myself.

“But then I must say after lunch, after sitting down just getting a lunch, getting a small break, we went out again and the stage felt fine and the second day it felt like normal.

“We were using stages we have used before to recce train so to speak, so we compared my notes and they looked more or less identical. I’m not saying driving is going to be as easy muscle memory-wise, but that still gave me a hint that it’s still there.

“It showed that all the experience, all the hours you put in, it doesn’t just go away. But then there’s a lot of things, I need to lose weight. 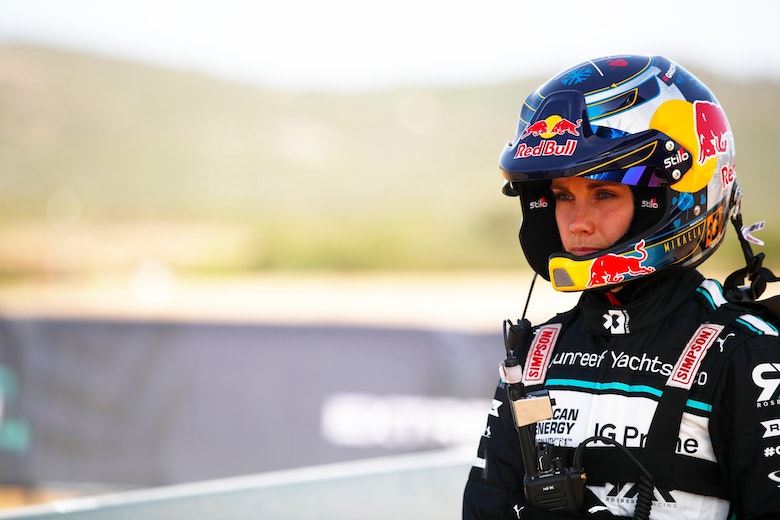 “It’s a bit in the last hour but I think we’ll manage.”

Familiarity should play its part. Driving the exact same specification of car as in his last rally, and with the same voice in his ear, should smoothen the reacclimatization for Åhlin – as will the presence of his old engineer Martin Wilkinson.

“That will be really good, I have a lot of trust in him and he knows what I need,” Åhlin praises. “He just needs to look at the data for five seconds and normally he knows what direction we need to go on the set-up considering how many years we spent together.”

It all begins early next year with a two-day test on January 12-13 ahead of a short 37-mile test rally the following day. The Swedish championship season then kicks off three weeks later.

But you won’t be seeing Åhlin as you once knew him. Instead what we’ll witness then is Fredrik Åhlin 2.0. Just as sharp, just as motivated, only with a different reason to win.

“Exactly. It has absolutely nothing to do with trying to achieve or getting back into the international stage at all,” he promises.

“It’s quite fun, I’ve never done the Swedish championship actually, so why not? It’s fun to try and do that for the first time. It should be a lot of fun but I know it’s fun if you win.

“I’m not going to lie, it doesn’t matter if I haven’t driven in three-and-a-half years, those who know me know I will try to win the first stage on the first rally. That’s my mentality, it always has been.

“And like I said if I’m not P1 on stage one we have to see what we can improve to be P1 on stage two.”

Why was Japan boring to watch?