Erik Cais has narrowly escaped being disqualified from second place on Barum Rally Zlín as punishment for a tire violation on the European Rally Championship’s penultimate round.

Orsák Rally Sport driver Cais is battling for the podium finish against compatriots Dominik Stříteský and Filip Mareš, with the trio separated by 13.6s.

But he very nearly found himself out of the rally completely thanks to breaching Article 13.1.3 of the FIA’s Regional Rally rulebook, which concerns the modification of tires.

“Any chemical and/or mechanical treatment of tires is prohibited,” reads the rulebook. 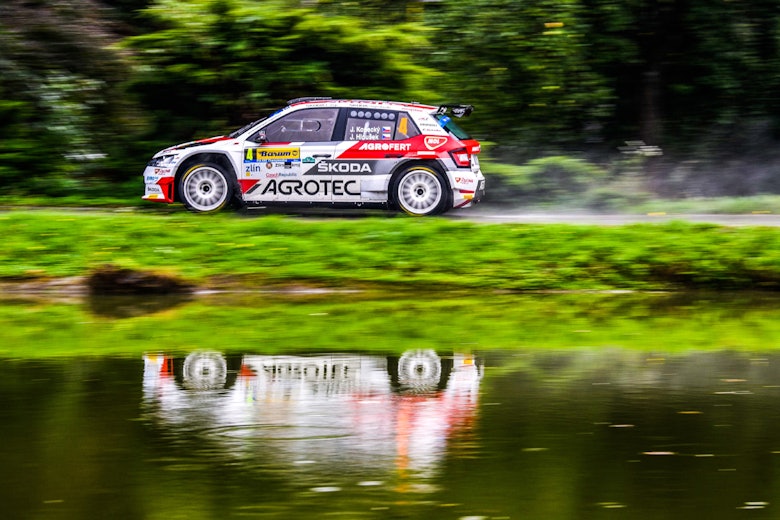 In the case of Cais, a mechanic scratched out the compound marking on the sidewall of all six tires that the former mountain bike champion had used on Saturday morning, which violates the aforementioned rule of tire treatment.

Despite the breach, Cais will keep his second place, though a repeat violation on an ERC round within the next 12 months will then trigger the suspended disqualification. A €5000 fine was also issued.

Yacco ACCR Team representative Petr Vejvoda explained to rally stewards that “there was a misunderstanding in given instruction between him and the mechanic in charge of tires,” per the stewards’ report.

Article 13.1.3’s primary purpose is to outlaw cutting bespoke tire patterns and forcing crews to run stock tire patterns at all times – along with rules regarding tire warming. However, the scratching of tire sidewalls also constitutes a breach per the letter of the law.

Unlike the World Rally Championship, which features Pirelli as a control tire supplier, the ERC has a semi-open tire formula, with three brands competing against each other: Pirelli, Michelin and MRF.

In the WRC, Pirelli publicly circulates tire choices once the final car in class has left service, whereas rubber selection remains highly secretive in the ERC, which may have contributed to the attempts to hide Cais’ tire allocation.

ERC crews sometimes resort to putting stickers on top of tire compound markings – which is not a violation of Article 13.1.3 as it does not interfere with the original tire surface, as scratching out markings would do.