It’s two days since Andreas Mikkelsen’s Rally Hungary victory when DirtFish calls to congratulate the Norwegian on his return to the winners’ circle. He’s busy. But, as always, he finds time for a chat.

Naturally nosey, I ask what he’s busy with.

“Actually,” he says, “I’m comparing some onboards from last weekend.”

I remind him he was in a different league to the best of the best from the European Rally Championship. So, how can he learn from other drivers’ onboards?

“I just wanted to see where they lost time,” he says, “and see if there’s anywhere I can go quicker.”

It’s testament to Mikkelsen’s commitment that he’s spending a Tuesday night in Monaco watching drivers he’s already defeated pedal a rally he will – if his return to WRC plan comes to fruition – never start again.

Mikkelsen dominated the ERC event. Yes, Alexey Lukyanuk might have been close after the first loop, but the defending champion’s ability to, somehow, encounter drama never ceases to surprise.

Talking to an ERC-regular midway through day one, I commented on Lukyanuk’s Saturday morning pace.

“Give it time,” was the reply, with a wry smile sensed from the other end of the telephone.

And a comparison with Craig Breen is flawed by the inherent differences in the tires beneath his Hyundai i20 R5 compared with the Pirellis on each corner of Mikkelsen’s Škoda Fabia Rally2 evo.

How about Oliver Solberg? Mikkelsen provided his own appraisal of the 19-year-old, but we’ll get to that.

I’m full of admiration for a three-time world rally winner to step back into the ERC and win. He believed in himself, but equally, a significant defeat on an ERC round would have dealt his hopes of a WRC return a fatal blow.

To an extent, this kind of gamble is nothing new for him. He did the same in 2017. Fresh from losing his seat when Volkswagen Motorsport pulled the plug at the end of the previous season, Andreas accepted a deal to drive a factory Fabia R5 in Monte Carlo, Corsica and Portugal. He took the class comfortably on the French events and was doing the same on the western European dirt before he went off. 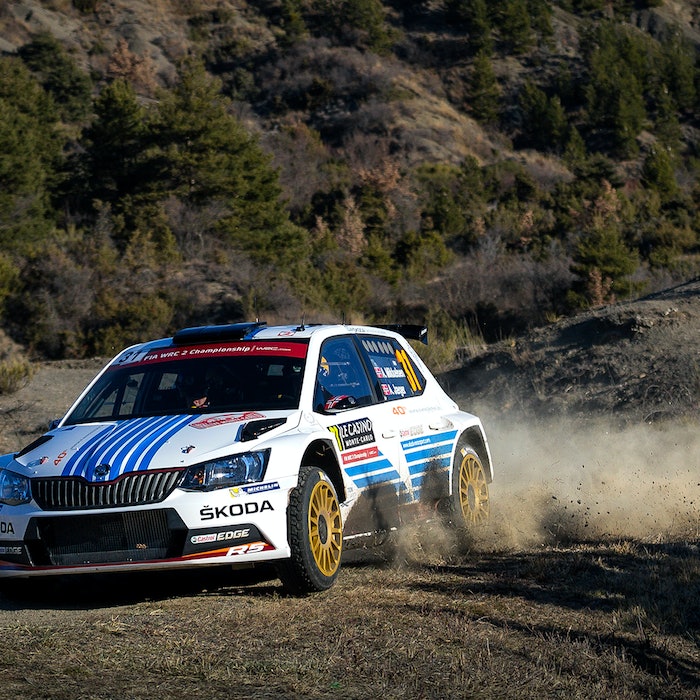 Mikkelsen ready to step back to WRC2

Regardless, it did the job. He was back to full employment with Hyundai – via a brief three-event Citroën cameo – by the end of the season.

“In one way,” he says, “when you do this kind of thing, when you enter a rally like [Hungary] then you really put your balls on the table. If I’d been beaten then it would really have looked worse – especially after two years when I was never able to deliver a good result with the Hyundai on Tarmac.”

There’s real emotion talking to Mikkelsen about that time with Hyundai. He struggled to find any confidence from the asphalt-specification i20 Coupe WRC.

We’ve been here before. His description of a period where he failed to finish sixth on an asphalt round of the series is stark.

“It’s very clear the Hyundai is a car made for Thierry Neuville,” he says. “It was a tricky car for me to drive, especially on Tarmac. But I take some confidence from knowing that I adopted my style from Sébastien Ogier and he adopted his style from Sébastien Loeb – and when Loeb came to Hyundai he was struggling to drive it on Tarmac as well.”

In short, Mikkelsen simply couldn’t make the front of the Hyundai do what he wanted. He couldn’t get the car to turn in and hold the line through the corner.

“It was very personal,” he says, “for me to go to that rally [Hungary] and try to show what I could do. I knew, after two-and-a-half years a lot of people were starting to doubt that I could do it on Tarmac.

“And there’s part of you that starts to doubt yourself as well.

“I felt lost [in the Hyundai on asphalt]. I was really thinking: “What’s going on?” I’m not at one with the car at all. Last weekend was like redemption for me. If I went there and I wasn’t on the pace, I knew it would be really bad. It was tough to go down to ERC and go to a rally I’d never done, but the others had.

“But people hadn’t seen me smiling in a rally car for two-and-a-half years. That had to change.”

“The car worked for me,” he says. “I did some development testing for Ypres with Škoda and I felt the car was really nice then. Obviously, I drove the R5 a few years ago and it worked and I always had a good time with the team.

“When it came to the test with the team before the start [of Rally Hungary] I only did 50 kilometres. They told me I could go back and do more, but I didn’t need to. It felt right. It gave me the feeling I’d been waiting for a long time.”

The 2016 Catalunya Rally winner was back to his best on asphalt.

“I knew I hadn’t lost the feeling,” he said. “I’m so glad I did this. I know I’m still quick when the car does what I want it to do. It’s just such a shame not to have the chance to take this experience and drive in Ypres. The conditions here were tough, always having so many changes, but it would have been good for Ypres…”

It’s those conditions which he feels complicates direct comparison between competitors.

“The road was changing a lot,” he said. “We went from Tarmac to mud, to gravel, it was so hard to predict.

“To try to compare myself with a driver in WRC, you look at Oliver [Solberg] in [WRC3] and he’s quick there. But Hungary was so different to, say, Sardinia. In Sardinia, unless it rains, the road doesn’t really change that much. But in Hungary, you needed to have the experience to understand what those changes would do to the car and to the grip.

“It’s also different to prepare for these ERC rallies, you don’t have the same onboards as you do in WRC; I think Oliver did an amazing job and you couldn’t really expect him to come to an event like Hungary and show the same sort of pace [as in WRC].”

It speaks volumes for his respect for Solberg Jr’s pace that it’s Petter’s son that he reaches for in terms of comparison.

To say the sense of relief is tangible from Mikkelsen would be right. And wrong. Take the start on any rally and you roll the dice. Who’s to say he didn’t land a pair of punctures and finish the event mid-way down the top 10. No matter how many scratch times he bagged along the way, people would still remember Hungary as the ERC round Mikkelsen lost.

A win was really the only result that would work on Sunday.

He backed himself and reminded the world that Andreas Mikkelsen can drive on asphalt. Granted, he wasn’t up against Ott Tänak and his mates, but this was an impressive display from a driver who still has plenty to give.

Especially in a car he can get turned in.