Colin Clark was out on shakedown this morning casting an eye on both the Hyundai World Rally Cars and the army of R5 machines in the main rally itself. Here’s what he learned…

As I joined the queue for breakfast this morning, socially distanced and masked up of course, it dawned on me that I really don’t know an awful lot about the 102kms of Rally di Alba that lie ahead of me this weekend.

I could have asked M-Sport team principal Richard Millener, who was sitting at the next table, but he was busy attacking his bowl of cornflakes with a woefully undersized teaspoon. From experience I can tell you that is a task that requires full concentration, so I left Mr Millener to it.

So what better way to get a flavor for the competition to come than to head out to shakedown? Just under two miles of asphalt road in the vineyards above the medieval town of Cherasco lay ahead. In all there were 160 crews, so as you can imagine, it was a mighty busy stretch of road.

Two hours of watching rally cars flying by in the early morning Piedmont sunshine gave me plenty to think about. These five points are what I learned this morning:

Pierre-Louis Loubet looks incredibly comfortable in his Hyundai i20 WRC. Faster than his two established team-mates in shakedown, he’s making the transition from R5 to WRC machinery look easy. But from past experience of rookies making the step up, we know that’s not entirely true. It’s way too early to jump to any definitive conclusions, but this young Frenchman is shaping up nicely and looks very much like the real deal.

2. This isn’t a fun day out for Tänak

Ott Tänak still isn’t comfortable with his Hyundai on asphalt. Six passes on shakedown was more than any of the other WRC cars put in he was still 0.6 seconds behind Loubet over the space of about two miles. This isn’t what we expected from the reigning WRC champion. This is Tänak’s first full tarmac event with Hyundai and it’s becoming increasingly evident that this weekend holds massive importance for him. It’s far from the relaxed jolly we might have assumed it would be.

3. Alba might turn into a gravel rally by the third pass

These roads are going to cut up really badly. Big cuts and four wheel drive cars aren’t kind to the road surface and in places shakedown almost resembled a gravel rally. With each stage being used three times – like on the last day of Rally di Roma a week ago – the final pass will be very challenging, and we won’t be assuming anything in terms of results until all our drivers are safely through the final stage.

The roads through the vineyards of Piedmont look awfully familiar. They reminded me a lot of the Dhrontal stages in Germany, and perhaps even more so of Alsace’s Rally France stages a few years ago. In future years might this event prove to be a very useful warm-up for WRC competitors?

When someone describes a morning as cool, that’s a very relative thing. I don’t call 25°C (77°F) at 9am cool. In fact, I call it bloody hot. But here’s what I really learned: it’s going to get hotter this weekend, a lot hotter. The locals that I talked to tell me it could easily get up to 38°C (100°F) tomorrow, and that might precede a downpour of biblical proportions! Weather could well play a big part in the outcome of this event. 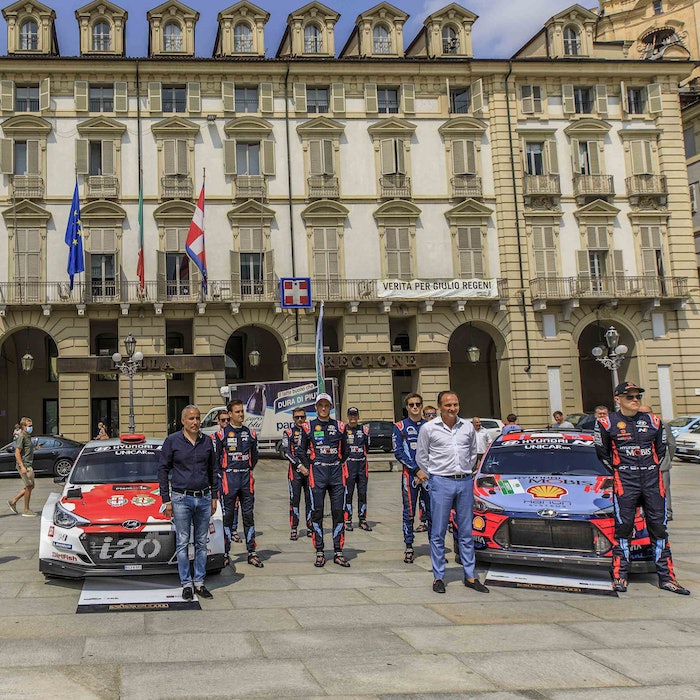 Thierry Neuville and Ott Tänak are going head-to-head for the first time since Rally México - but what else can we expect from Rally di Alba?