Asked to sum up how it felt to have just been crowned 2021 American Rally Association presented by DirtFish National Champion, that was Travis Pastrana’s response at the end of an Ojibwe Forests Rally he’d led from start to finish ahead of old rival Ken Block.

“I mean happy would be a good one [word to use] but I tell you what, it’s a lot of work, a lot of team effort,” he told DirtFish.

“To have rolled last round and to have the team work so hard to get this car ready back for Ojibwe, it’s been one of the best rallies for me and then to have Brandon [Semenuk] roll [in testing], just a lot of pressure to not mess up and at the end of the day we had a great battle with Ken and it’s a lot of relief to come through.”

Success in 2021 – claimed with two rounds to spare – is Pastrana’s sixth US national rally title following championships wins from 2006-09 as well as 2017.

But this year’s run has been incredibly emphatic, as Pastrana has now won 66% of the season’s events and done that despite the increased competition the ARA has enjoyed this year with Block’s return and outgoing champion Barry McKenna using a bespoke, modern Ford Fiesta WRC.

Pastrana’s a touch disappointed to have secured the title against a depleted entry list (both team-mate Semenuk and McKenna didn’t take the start) but he still sent in anyway and “did what we had to do”.

“I love driving, that’s why all of us do it,” Pastrana said. “This is a passion sport.

“Barry stayed home this weekend because work comes first, it just goes to show you as much as we love what we do, we get a privilege to do our hobby. 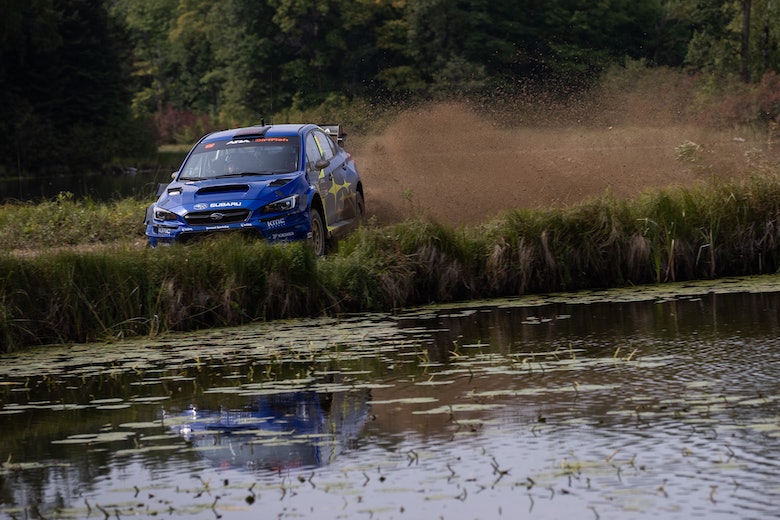 “Championships are awesome, I’m so stoked for the team and all the work they’ve put in, Rhi [Gelsomino, co-driver], and everything but at the end of the day when everyone shows up to race it’s game on, it doesn’t matter what your stakes are.

“Everyone says what did you learn from the last round, you crashed out while leading and second could have pretty much wrapped up the championship, what do you think?

“Obviously I went out and won a few stages, beat a stage record and won it by 20 seconds so that just goes to show I didn’t learn anything! I love driving and I really aprpeciate being in the seat every day.”

It even evoked memories of one of the first rallies Pastrana ever watched – Rally GB 2001. Then, exactly two decades ago, Richard Burns came out on top of an epic title decider in the Welsh forests to win the World Rally Championship in a Subaru.

Pastrana worked harder than ever this season to achieve his title, and can now appreciate how Burns felt that day.

“My first rally I saw, Rally GB, I saw Richard Burns come in and he’d just won the WRC championship with Subaru, it was awesome,” said Pastrana.

“But he came in and he was so mellow and monotone and everyone was cheering and he just sort of watched it back and sat down for a second, I never realized that at the time but rally it’s a week, it’s a month: it’s not just drivng the stages.”

Burns’ first port of call when he won the WRC was famously grabbing co-driver Robert Reid’s hand, lifting it into the air and shouting: “You’re the best in the world!”

There was a similar moment of appreciation for Pastrana, who interrupted himself, turned to his co-driver and embraced.

“Thanks for all the work.”

Gelsomino and Pastrana duly celebrated together in suitable fashion on the podium like one of Gelsomino’s compatriots, Formula 1 driver Daniel Ricciardo would, with a shoey.

Beer – and water for non-drinker Gelsomino – out of a sweaty Alpinestars racing boot might not be for everybody, but it will never have tasted sweeter for this pair after a season’s hard work.