A summer of British and Irish rally action for Max McRae means three generations of rallying’s most famous family will compete against each other for the first time ever at July’s McRae Rally Challenge.

The 17-year-old has lined up four key events, starting with next month’s Donegal International Rally, followed by Goodwood Festival of Speed, the McRae event at Knockhill and finally the Nicky Grist Stages in Wales. Max will drive a variety of Ford Fiestas, including a Rally2, Rally3 and Rally4.

The Scottish circuit-based event is the one which catches the eye, with Max taking on father Alister and grandfather Jimmy at a delayed 25-year celebration of the anniversary of his Uncle Colin’s world championship title.

Max told DirtFish: “Knockhill is going to be crazy, competing against my dad and my gramps for the first time. As well as that, it’ll be my first time in a Fiesta Rally2, which is something else I can’t wait for. But, yeah, the whole McRae Rally Challenge is going to be special. To be around people, like family and friends from around the world will make this an unforgettable weekend – even more so if I beat the old boys!”

Predictably, Alister wasn’t keen on the prospect of being beaten.

“Be sensible,” he said. “Max is right about being a very special occasion, but it’s an even more special occasion for me to show the old boy and young Max how it’s supposed to be done!

“Seriously though, this is a great program we have planned for the summer. We’ve been trying to get home for a couple of years to get Max in a car and see how he goes, but COVID has made it difficult.

“He’s going to get a really good cross-section of events with Donegal and the classic Welsh stages on the Nicky Grist as well. We’re still after closing out a few details on the car side – finding a Fiesta Rally3 for the Nicky Grist is challenging, but we’ll get there.” 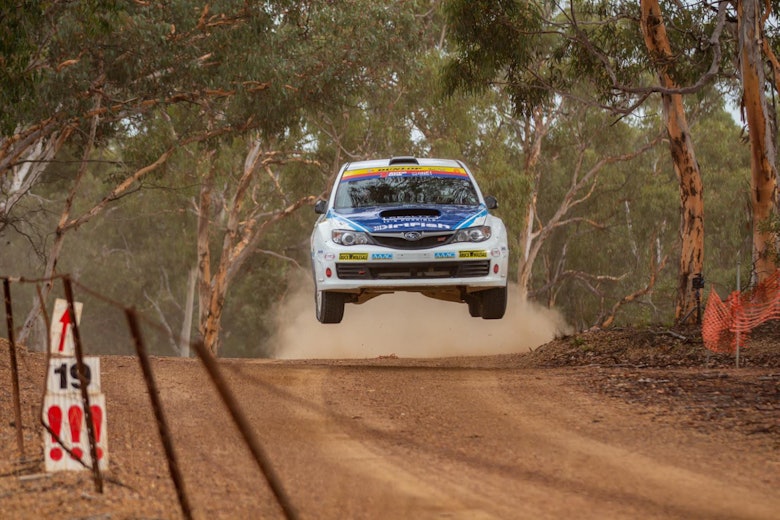 THE LOST WIN THAT GIVES MAX MCRAE HOPE FOR THE FUTURE

McRae Jr has already driven in Wales, running some of Colin’s cars at a private test in Rheola in 2019.

And he won’t be short of recent seat time either, arriving north of the equator fresh from the latest round of the Western Australian and Australian Rally Championship, this weekend’s Forest Rally.

“It’s fair to say there’s a lot to be excited about,” added Max. “I was already stoked to be driving the Subaru in the WA and Australian Championships. But have a winter – or summer as it’ll be up there – like the one we have planned now is amazing. I’ve got a lot of people to thank for helping us out.

“I’ve grown up listening to Dad’s stories about Donegal and I just can’t wait to get over there and have a go for myself. I’ve watched some of the onboards on YouTube and the stages look amazing! It’s the same for the Nicky Grist. I feel like I’ve already been on some of those roads from the stories and the videos. I did get the chance to go test some of Uncle Colin’s old cars in Walter’s Arena, part of the Rheola stage, in 2019, so I’ve got some idea of how good the Nicky Grist is going to be.

“For Goodwood, everybody knows the Festival of Speed. I know there are a lot of people from here who fly all the way over from Australia just for that weekend. To be going and having the chance to get in a car at the event is unreal.”

Subaru Blue is the colour…

As well as his out of Scotland, Ireland, England and Wales, Max is committed to this year’s WA series close to home in Perth. He will also compete on selected ARC rounds, chasing  Production success in the pan-Australian series.

Down under, McRae and co-driver Mac Kierans will continue to use the Maximum Motorsport-prepared Subaru Impreza WRX STI they dominated the WA-opening Winvale Stages in last month.

But this time the car will look different. It’s back in blue.

McRae added: “Seeing the Subaru in that famous blue gives me goosebumps.

“Subaru has been amazing with the support down here – Blair [Read, managing director Subaru Australia] and his team have helped me to get this season sorted. And, like you can imagine, the car’s so important – I’ve seen so many cool pictures from when Dad and Uncle Colin drove Rally GB together for Subaru in 1998 and to have the chance to compete in the same colours is something really special for me. And the Forest Rally’s going to be a big challenge, with crews from both WA and ARC coming – it’s a good chance for me to measure my speed against the best in Australia.”

This Irish Tarmac Rally Championship round is one of the most popular all-asphalt events in Europe. Stages like Knockalla and Atlantic Drive are loved the world over for their fast, undulating and rewarding nature. With crowds closing on 100,000, the atmosphere on and around Donegal is almost as much a part of the rally as the roads themselves.

Global motorsport’s annual garden party comes courtesy of the Duke of Richmond and Gordon, his driveway and the woods at the top of the hill. The Festival brings together megastars from around the sport, from Formula 1 to MotoGP and rallying plays an integral part across the full four days. As well as driving up the hill, Max will make his debut at the Hannu Mikkola-designed Forest Gravel Stage.

Delayed by COVID-19 for the last two years, the McRae Rally Challenge was originally scheduled as a 25-year celebration of Colin McRae’s history-making World Rally Championship title. Finally, the famous Knockhill race track – a place where Colin made his name as a race driver in a TVR Tuscan and in the British Touring Car Championship – will host some rallying royalty as the sport comes together to remember 1995. At the heart of that will be a rally with an entry list spanning three generations of McRae.

Max has grown up hearing names like Monument, Halfway and Crychan. This round of the British Rally Championship will offer him the chance to sample them for himself. Sadly absent from the World Rally Championship schedule for a decade, these are the very roads that helped create some of the giants of the sport. Quite simply, some of the best forest roads anywhere in the world.