Dane Skeete has won his second ever Rally Barbados, edging a thrilling fight in his Subaru S12B WRC as rivals Zane and Stuart Maloney both fell by the wayside.

Skeete – son of record 13-time Barbados winner Roger Skeete – took victory by over a minute ahead of Josh Read and Robert Swann.

Stuart Maloney had led the rally overnight in his Škoda Fabia Rally2 evo but it had been nip and tuck through Saturday with Skeete – both drivers taking turns in the lead. But Formula 3 racer Zane Maloney was also in the mix, just 10 seconds adrift of his uncle ahead of Sunday’s 10 stages.

All three drivers had promised to give it “maximum attack” over the course of the second day, but the two Maloneys would ultimately push that bit too hard.

Zane was the first to fall. Navigating the famous ‘duck pond’ section of the Kendal stage – Sunday morning’s opener – he ran off the road and destroyed the rear-left corner of his Fabia R5.

“The stage was amazing until duck pond,” Maloney told DirtFish.

“I came into the right a bit too hot so I was already out of position and I tried to carry too much [speed] into the left. Thinking back I could have probably avoided the pole but if we had avoided the pole someone might not have their house.”

Skeete had no such drama and set the pace to overturn his 3.5s deficit into an 0.8s advantage as Stuart Maloney could only manage the third-best time, but by the very next stage – the first of three passes of Dark Hole – the intense fight for the lead was over.

“Yeah, I just went in too quick [and] the car couldn’t take it,” the older Maloney told DirtFish.

“I think when I landed down I had a little left locking and it just went in a direction that wasn’t on the road. A concrete kerb, a big concrete kerb, took off the wheel but [there was] no damage to the car.

“But where I was in the stage, it took off the outside of the rim and it was pointless for me trying to drag it.

“My intention was to push, it was only the three of us, we were tooth-and-nail battling and there was no way of winning the rally without pushing.”

The second Maloney demise for the second successive stage suddenly launched Skeete into a big 47.2s lead over Ford Fiesta R5 pilot Read, and from there his job became simpler but no less difficult, having to maintain a strong pace but calculating his risks so as to not jeopardise his shot at victory over the remaining eight stages.

But Skeete got the job done and delivered Barbados the home victory it craved after US visitor Ken Block took the win the last time the rally ran in 2020.

On his first proper rally in a four-wheel-drive car, let alone an R5, Read was massively impressive all weekend long and when he was shuffled up into second place following the Maloneys’ retirements he didn’t have it easy.

The chase for the final podium spot was intense behind him, and soon the pressure was being piled on Read to retain his rostrum place. He managed it, despite it initially looking as if he hadn’t.

Frank Bird had endured a Saturday to forget as two driveshafts broke across the day, there was a persistent electrical gremlin aboard his Ford Fiesta Rally2 and co-driver Jack Marton “blacked out for a bit” with severe heat exhaustion amid the 67° cockpit temperatures. But on the stages which he did manage to complete cleanly, Bird displayed rally-winning pace – and it showed on Sunday as he set a string of fastest times in his bid to climb up the order from ninth.

He’d set himself a target of the top five, but he was soon latching onto the heels of Swann and Kevin Procter. Despite crashing and breaking the rear-left wheel on the first Dark Hole, Bird still set the fastest time.

The British driver continued his charge and snatched second from Read on the penultimate stage, but wasn’t classified in the overall results as he was found to have gone OTL following that broken wheel on Dark Hole. 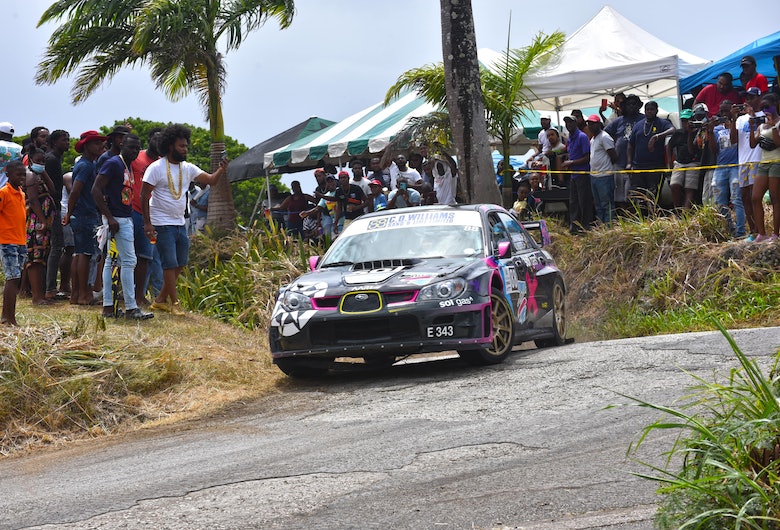 WHAT MAKES RALLY BARBADOS SO SPECIAL?

Procter had also dropped behind Swann by this point, as he lost over half a minute to stage winner Bird on SS17 of 19 with a high-speed spin he described as “my scariest moment in rallying”. Swann initially looked to have missed out on the podium, but following Bird’s removal from proceedings he ended up finishing third behind a popular Bajan one-two.

Mark Thompson was a strong seventh in his Mitsubishi, ahead of Mark Maloney, Tom Preston and Andrew Mallalieu who completed the top 10 in his Ford Fiesta R5.

Why Lappi believes crashing from the lead was hard to avoid