Last weekend at Sno*Drift Rally, the opening round of the American Rally Association’s 2021 season, Travis Pastrana found himself going into the final loop 42 seconds ahead on his team-mate, Brandon Semenuk with third place Barry McKenna over two and a half minutes back.

This would typically be the perfect situation for Pastrana to slow down, take some extra precautions, and avoid any serious risks to protect his lead and gain those vital championship points.

While a smart move for sure, it makes for a less exciting (though by no means boring) ending to a rally than when drivers are within a few seconds of each other, risking it all for any small time save they can find.

Pastrana, along with Semenuk, and McKenna, might have found the perfect thing to keep themselves from falling into the ‘play it safe’ tactic, and to keep fans guessing until the end of the final stage. 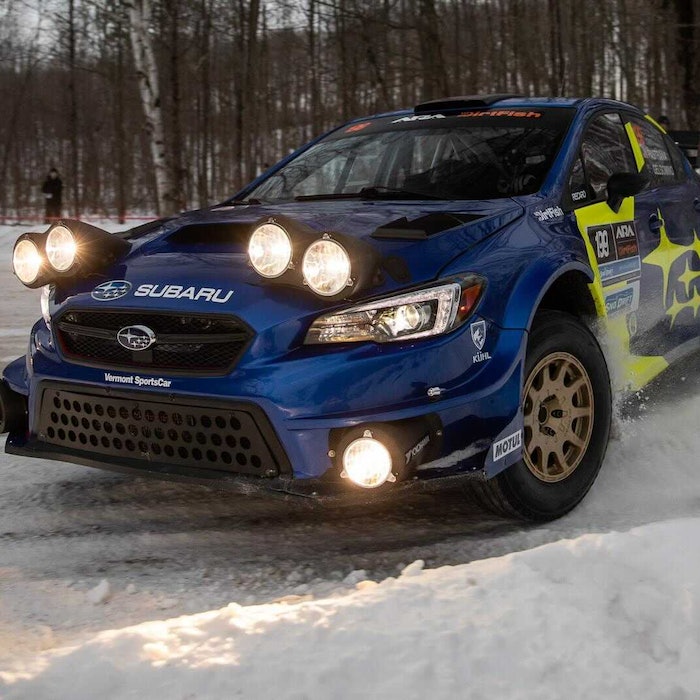 McKenna explains: “We have a dollar bet on for each rally of the year, so you pick the stage and whoever gets it, wins the stage, gets the dollar.”

This started last year at Olympus Rally when the trio decided that going into the final loop, whoever was furthest behind would choose a stage for each driver to bet the dollar on, a sum of money large enough to convince each other to push their driving to the limits.

“Travis is the instigator on the dollar bet, typically,” said Semenuk when explaining the origins of the new tradition.

The chosen stage becomes known as “the dollar stage” and could be the catalyst to a leader’s fatal mistake allowing for a last minute comeback.

At Sno*Drift, the decision landed on McKenna, who decided on SS12, the final stage, and one that drivers were struggling with already.

“Obviously if you’re behind you’re like yeah, let’s pick the most sketchiest one and they might crash,” said Pastrana, who described SS12 as “the iciest, sketchiest, narrowest stage”.

Undeterred by the challenge, Pastrana tackled the stage as hard as he could.

“I knew we had a minute lead going into that last stage and was like alright it’s only seven miles, damn there’s a dollar on the line so we’ve still got to push really hard,” explained Pastrana, “this is important!”

Semenuk, impressed with his teammate’s dedication to the dollar stage, said, “obviously most people would take it easy and just take the win but he sent it!”

Even though McKenna pushed hard on the dollar stage, unfortunate mechanical issues left him struggling to keep up with the times the Subaru drivers were turning in on the last loop.

The winner of the SS12 dollar stage bet would be Brandon Semenuk, edging out Pastrana by just under three seconds, but the story doesn’t end there.

In his efforts to win back the dollar that Semenuk lost at Olympus last year, he cut hard in the final corner and spun across the finish. In doing so he knocked over a mailbox, which Pastrana specifically placed another dollar on someone hitting, cancelling out Semenuk’s dollar stage victory winnings.

“Well the very last corner, I mean this is a dollar bet, so it’s all out,” Semenuk said, “every tenth counts!”