Travel a long way north, to a land where it’s dark a lot of the time, snowy for much of the time, and chilly all of the time and there’s this rather splendid spectacle.

I’m not 100% on the science, but it involves highly charged particles of stuff and rays of light. You might have seen it. You know what I’m talking about. It’s that moment when a rally car is braking hard for a slow or medium-speed corner in perfect snow conditions.

Aimed at the apex, momentum, the left foot or the happy stick flicks the car to 45 degrees and the dream drift. Nothing unusual there. The phenomenon side of things comes with the swirling vortexy cloud of snow particles – charged highly by the disturbed air of a World Rally Car – chasing the air of a super-sideways motor.

It’s one of the finest sights in our sport. And it’s just one of the things we can look forward to at next week’s Arctic Rally Finland.

But what else is coming your way when the World Rally Championship travels further north than ever before next week? Here’s a bit of a guide to round two:

Arctic Rally Finland clerk of the course Kai Tarkiainen completed his final recce of the route on Friday last week and he’s the man best placed to give us the lowdown on the sunshine and the stages.

“The latest weather we’ve seen is for some snow coming in early in the week,” said Tarkiainen.

“It looks like it will snow on Monday and Tuesday and maybe into Wednesday morning. Once the rally starts, we should have temperatures between minus five and minus 10 – perfect for a winter rally. And it looks like we’ll have the sun for at least some of the event.

“The roads are in absolutely perfect condition, they look fantastic. If we do get a lot of snow, we will run the plough through.

“Obviously we’d rather not have to do this after the recce, but if it’s necessary we will do that. I think the drivers would rather we ploughed the roads as close to the lines as we possibly can rather than leaving them to deal with 20 or 30cm of fresh snow.”

We’re asking this question for a Mr S. Ogier: how much would a ploughed road clean?

Kai said: “The plough does a pretty good job of shifting a lot of snow and, with the weight of the machine, it makes a good surface. There would still be some snow around on the surface though.”

One of the great debates in recent weeks has been whether or not the organizers will water the stages. They won’t. Kai told me.

Why, when it’s been -30, would they need to generate ice? It’s a good question. Here’s some more science: it’s too consistently cold. And dry.

Year-on-year we bang on about the perfect winter rally road recipe: cold spell, heavy, heavy snow, couple of days above zero to melt some of that snow, then massively deep freeze – like -15 for weeks. Then a bit more snow to make it look pretty and generate that vortexy swirly snowy picture I painted at the top of this story.

Those conditions make for a solid ice base, giving the studs something to grab hold of.

The temperature in Rovaniemi hasn’t been north of nought (Celsius) for a while now. There’s been no melting.

Instead, what we have is piles of compressed powder. Introduce 1,536 seven-mil studs on four spinning Pirellis and those Sottozeros will slice through the snow like a hot knife through butter.

Watering the stages a week or so ago would have generated that base of ice – something that was done on some of the test roads used by the teams.

“We decided not to do it,” said Tarkiainen. “We talked to the teams about it and they said they would prefer not to. The ice that generates is quite… artificial, if you like, and gives a different sort of grip.

“Don’t forget, the roads here have been sitting at minus temperatures for a long time and they really are packed hard now. The snow might be swept off the line by the cars quite quickly, but what’s underneath is solid ice; there’s a lot of moisture around the gravel in the road and that’s what freezes.”

Tire selection for this rally is far, far more – four-times more, to be precise – straightforward than it was on round one in Monte Carlo. How so? There’s one choice of Pirelli here, not the four available for the French Alps.

Here it’s a 15-inch 205mm studded Sottozero J1. It’s not as narrow as the 145mm version, known as the bicycle tire, which was outlawed for 2009 (the reason being that these tyres required bespoke 16-inch rims – seen as an unnecessary expense by the teams), but it still produces superb grip.

Theoretically, the only choice for the teams is between five and six tires per loop (ie, one or two spares), but as we saw last time out in Monte Carlo, there is the potential for the teams using scrubbed covers as well. Given that sharp studs are everything in Finland, that would be something of a surprise.

Stud retention is always a significant factor on snow rallies. There’s nothing worse than clattering through a gravelly section, then finding out your studs have gone south as you hit the anchors into an icy hairpin.

Pirelli has a top-secret vulcanisation process which nobody talks about (think Harry Potter trying to get Dumbledore to discuss Voldemort in his early years at Hogwarts), but it works. Studs should stay put this week.

With everybody having tested the new tire, what’s the thinking? Rally Sweden winner Elfyn Evans says a comparison with last year’s Michelin is complicated.

“We’re using the tires in quite different conditions,” said the Welshman.

“Last year in Sweden, for example, we had nearly no snow and now at the test here we’re in -30 with plenty of snow and we’re getting a little bit of movement from the tire because of the harshness of the conditions.

“It’s actually quite hard to make a comparison. What I can say is that the [Pirelli] tire feels quite good. It’s a bit lighter, so that gives slightly different feedback.”

Evans’ Toyota team-mate Kalle Rovanperä says that with the lightness comes a slightly softer body and sidewall too.

“With testing, we’ve been able to work on the set-up to bring the car to the tire a little bit,” Evans added.

The stage is set

We’re all very well aware of what rallying in Finland means: fast roads and long flights… is this week going to be a snowier version of the 1000 (frozen) Lakes, Kai?

“Only the first stage on Friday is quite similar to the roads down south around Jyväskylä,” said Tarkiainen.

“I would imagine that first one will be one of the faster ones. It runs mainly on a fast, wide and quite undulating road – it’s going to be a spectacular way to start the event with the cars going over crests at 200km/h (120mph).

“The first stage on Saturday has sections which have never been used before and the intriguing fact that the stage will go across the top of a swamp. There’s not a road over there, it’s just frozen hard. All of Saturday will be a great challenge, with some slightly more twisty, technical places – coming out of the quick stuff it’s never easy to find the braking point on these really snowy roads.

“We had thought about going further east – and the Arctic Lapland Rally has done that in the past. Certainly the initial thinking for the powerstage was to take it further east, but then we were told the Army were doing rehearsals in the area, so we thought it better that we stayed out of their way!

“The powerstage we’ve gone for is fantastic. It’s got some good speed in places, but it’s also got some fabulous scenery as well. It’s great.” 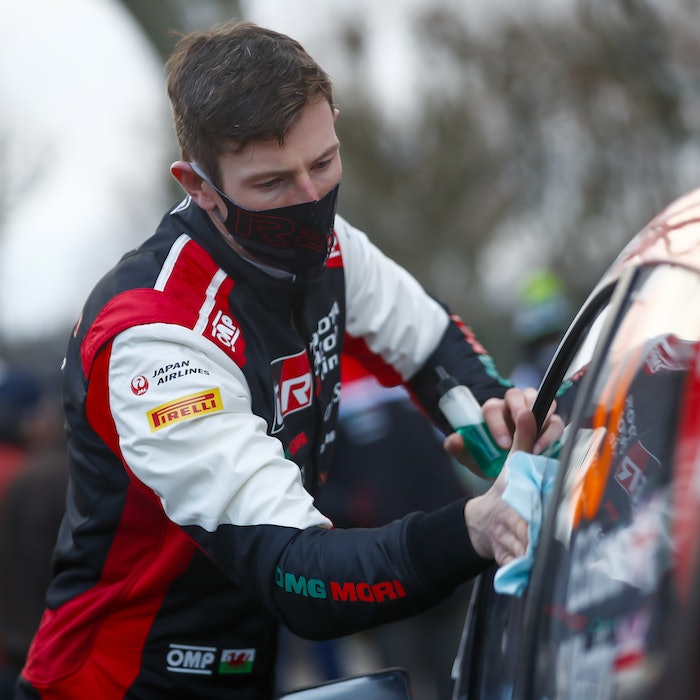 Could Evans wipe away the best on WRC's winter rally again?

Evans' first Toyota win came in Sweden last year, and now he heads to Finland off the back of a strong season start

Rovamniemi is the capital of Arctic Finland and here’s an interesting one for you, it’s the largest town in Europe. At 4,981 square miles, the town of Rovaniemi is the size of Corsica!

But one man makes it special. One man is the reason half a million people pour into that town every year (that stat might be slightly lower for 2020…) and make it Finland’s second most visited place behind Helsinki.

Joulupukki. Precise translation? Christmas goat. More traditional one? Santa Claus. This is his hood. Year around, if you dig deep in to your pockets and pull plenty of Euros from within your Christmas spirit, you can go and see our planet’s most famous bearded individual. While you’re there, you might as well say hello to Prancer and his 12,450 reindeer mates who share the town with a population of 63,000.

The first time I visited Rovaniemi the temperature dipped to a bone-chilling -38. My lasting memories of that trip were of my eyelids freezing together and the inside of the car never being warm enough to take off a big winter jacket.

But the best memory was of a magical place to go rallying.

And the potential for that other highly charged, particle-based phenomenon sometimes seen in these parts. The one called aurora.

With the stage set, the WRC’s ready for its northern highlights.

Pastrana: When everyone else was scared, we were smiling!