Though this feature may be about Volkswagen Motorsport and the numbers #20 and #21, it’s sadly not about the car giant making a U-turn on it’s plans to exit motorsport entirely at the end of this year.

Instead, it’s a trip down memory lane to look at two of Volkswagen’s finest machines, two individual chassis that hold the relatively unique distinction of contributing to FIA world championship wins in two different motorsport disciplines.

Volkswagen rejoined the World Rally Championship in 2013 after a 23-year absence, with a program led by technical director Willy Rampf – who had previously held the same position at the Sauber Formula 1 team for 10 years – and WRC project manager François-Xavier ‘FX’ Demaison, who had previous experience at Peugeot, Subaru, Citroën, and Petter Solberg’s privateer WRC team and will now join Jost Capito in Formula One with the Williams team this year.

While the technical team was mightily impressive, Volkswagen did not, unlike contemporaries Citroën and M-Sport Ford, have any recent WRC experience to draw on when designing its Polo R WRC car. It did however have recent experience from the Dakar Rally, where it enjoyed three straight wins from 2009-2011. The rally raid experience proved to be a valuable starting point. 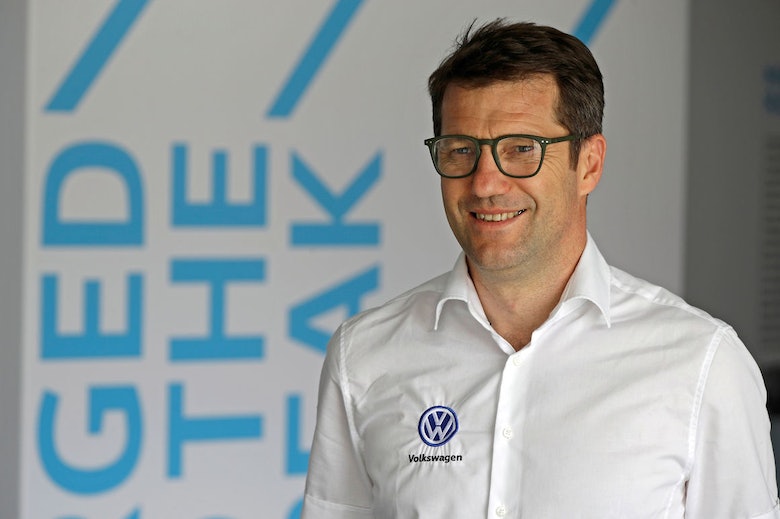 “I joined Volkswagen Motorsport in 2011, in August, and my technician FX Demaison [joined] in the beginning of 2011,” Rampf explains to DirtFish. “And basically that was a transfer from the Toureg, the Dakar car, to a WRC car.

“Overall we had no baseline, but FX has a lot of experience in what is needed for a quick rally car and before I spent 10 years as a technical director in Formula 1 so I had a good understanding about designing a car, what it needs to be competitive, lightweight, using different materials and so on.

“At first we changed the philosophy of how to work and how to develop this kind of car,” Rampf says of the Polo R’s early development. “With the Toureg, or a Dakar car, the most important thing is reliability because the stages are really long, let’s say they could be 500 kilometers or more.

“A WRC event is basically a sprint race because a complete event is about 350 kilometers of stages in three days so Friday, Saturday I’d say on average they did 140 to 180 kilometers and at lunch time there is a break for service. So the car had to come in for the service, then we do the service, then you send the car out again.”

While German cars are famed for their reliability, that wasn’t a major focus early on with the Polo. Extracting the absolute maximum speed, however, was.

“We concentrated from the beginning only on performance, not on reliability because if the performance is there it’s easier to make a car reliable and if the car is very reliable it’s very difficult to increase the performance in the short term because then you have to start with your lightweight program,” Rampf explains.

“It’s much better to do it the other way around and this is what we did from the beginning and FX has a very good understanding, he is an excellent technician. He started with the concept of the car and then we were thinking, ‘What is the best approach to design this type of component?’ if it was the suspension or on the gearbox or the differential or on the bodyshell itself.

“With the Polo, the two-door bodyshell of the Polo, I think we had a very good baseline car with regards to dimension and overall weight of the bodyshell. Then we started the designing of each and every component on this approach.”

Success on the stages

The Polo R, in WRC guise, went on to become one of the greatest cars in the category’s history, winning a staggering 43 events from 52 starts, and going completely unbeaten in the drivers’ and co-drivers’, and constructors’ championships for four years. But despite the comprehensive dominance, Volkswagen never really expected that level of dominance – at least not straight away.

“We expected much more challenge from them [Citroën and M-Sport],” Rampf insists. “A big help was also Sébastien Ogier, he’s currently the best rally driver in the world, and our target from the company was in the first year we have to learn and to finish all the rallies, second year was [to be] regularly in the points, third year was regularly on the podium, and year four was winning the world championship.

“It was clear from us that we tried to achieve more than this but we did not expect that with our combination of car and driver that we would dominate. It was a nice surprise for us.”

With The Polo R WRC halfway through its second season of competition, the decision was made to use it as a basis for a car to compete in the new World Rallycross Championship.

Volkswagen had already set to work developing a Beetle for the American-based Global Rallycross Championship but, with less money to play with and different marketing ambitions for the Euro-centric World RX series, a Polo rallycross car was what was needed.

“It started in August 2014. We got the order, the wish from [Volkswagen Motorsport director] Jost Capito because he was always a big fan of rallycross,” Rampf recalls. “The GRC program in the States was his initiative, he said this type of ‘stadium sport’ is the future and it will be much more attractive to the younger people. And he said you have to develop a rallycross car based on a Polo. We said, ‘OK, we can do it’, and he said you have an extra budget so you have to save some money somewhere else.

“Basically we had existing Polos so we modified the Polos to World RX regulations.”

I think it was easier to go from a WRC car to a World RX car. The baseline is OK, and in some areas the World RX car is even lighter because you don’t have to reinforce it so much Volkswagen's then technical director Willy Rampf on adapting the Polo R WRC for World RX competition

Polos mothballed from the 2014 season – the final four version 1.1 cars – were chosen as the basis of the project, with the bodyshell, gearbox, and suspension all being carried over but with minor revisions, while a new 2.0-liter engine was developed by Donatus Wichelhaus Volkswagen’s head of engine development to take the place of the 1.6 used in the WRC. It was the same engine used in the Beetle from 2015 onwards, but besides that, very little was shared with the Beetle.

The Beetle, initially developed by sister firm Seat Sport, was a rallycross car right from drawing board to reality, unlike the Polo.

“In the end it was a lot of small components but the basic bodyshell was the same, suspension-wise it was also a carryover or maybe with very small modifications compared to the WRC.

Chassis #20 and #21 are of particular interest, being two of the most successful chassis across both the WRC and World RX.

The first of those began its competitive life in the hands of Jari-Matti Latvala at Rally Sweden in 2014, an event he won. Latvala would drive the car again in Portugal, Italy, Finland, and Australia, winning a second time and failing to finish on the podium only once.

After its modest WRC success, the car was converted to a rallycross car ahead of the 2017 season where it would go on to become the single-most successful car in World RX history with Johan Kristoffersson at the wheel. In 24 appearances over two years, the car won 18 times – including nine consecutively in 2018 – and notched up a further three podiums, giving Kristoffersson the first two of his three world titles.

Chassis #21 on the other hand enjoyed much more WRC success. Like its ever-so-slightly older sibling, it competed on the events in Sweden, Portugal, Italy, Finland, and Australia, albeit in the hands of Ogier, who also contested Rally Spain in the car. It too only missed out on the podium once but, unlike #20, it won four times in the WRC.

When it was converted, it initially sat on the sidelines as a test car, getting a solitary race outing in the hands of Volkswagen test driver Dieter Depping at the World RX of Germany round in 2017. It became Petter Solberg’s race car for his World RX swansong in 2018 though, taking a best result of second in Belgium and the USA.

Following Volkswagen’s withdrawal from World RX at the end of that season, the car was sidelined once again until Kristoffersson secured a deal with the manufacturer to rent it for the 2020 World RX campaign. Kristoffersson described the agreement to secure the factory machinery for his privateer outfit as being “all about ‘don’t take no for an answer’ basically”.

In 2020, the car was largely the same as it was in 2018, with minor changes being made to keep it compliant with regulation changes that were made ahead of the season.

“The car has just been standing since 2018 and hasn’t done any development, we just took what we had and we believed that was going to be our base but it actually was not our base because of the things we had to change because of the technical regulations,” Kristoffersson tells DirtFish.

“We had to change a few things within the differential, that was basically it. We just had to do some small adjustments. Absolutely no major things, some very small details but we only had two test days before the first race so it’s pretty short for getting back into rallycross after one year out.”

Nevertheless, on its return to World RX in 2020, Chassis #21 won four times. It missed the podium just once, and gave Kristoffersson – back in World RX after a year in the World Touring Car Cup – a third world title, while also adding to its own championship-winning legacy from 2014.

No matter whether it’s in WRC or World RX flavor, the Polo has cemented its place as one of motorsport’s all-time greats, but if Volkswagen was developing the car today, what would be different? How could they improve on perfection?

“That’s a very good question,” Rampf chuckles. “We would just continue with our lightweight program that we had from the beginning.

“As we know the baseline from the Polo is very good, the next step would be to take every single component to make it a bit better, a bit lighter, a bit stiffer, a bit more in the middle of the car.”