Crossing Australia isn’t exactly the work of a moment. It took Max McRae almost five hours to fly from Perth to Brisbane. It took his Ford Fiesta R2 six days. But it was all worth it.

McRae finished his maiden Australian Rally Championship outing with second place in the ARC Junior and ARC 2WD cups and 14th place overall. Not bad for a 16-year-old competing outside of his native Western Australia for the first time.

“There were so many positives to take out: going there I’d had limited time in what is, for me, a new car and, of course, the stages were completely different to what I’d been used to.”

And then there was the bigger, two-day format and the added exposure of a national championship.

“We kind of knew there would be some eyes on me,” McRae added, “but that doesn’t bother me – I was there to take the experience and get the best out of the event. We definitely did that.”

Having competed regionally in WA, McRae admitted the step-up to the Australian Rally Championship took him by surprise.

“It probably was more of a challenge than I thought,” he said, “but the challenge was in the stages. They were so much more narrow than anything I’d driven on before. 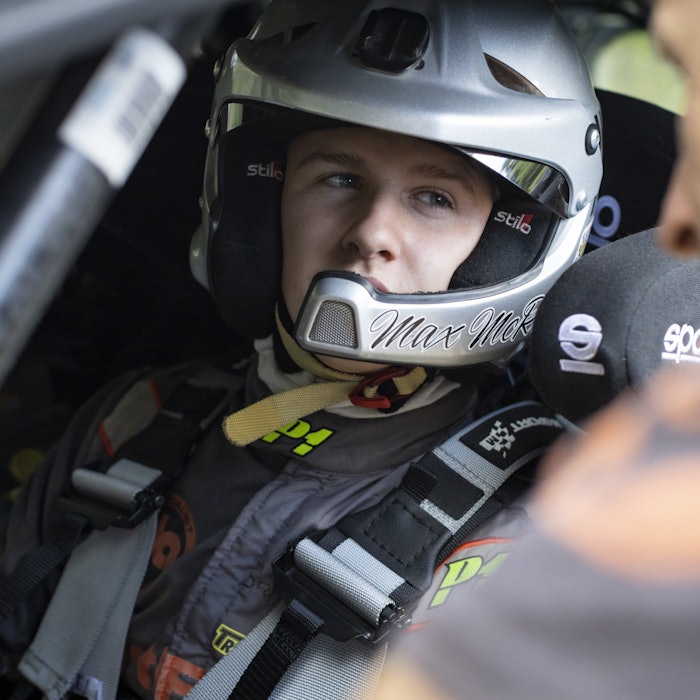 I need to have this kind of challenge and when you get it right, it’s so satisfying Max McRae

“I thought they were going to be quite flowing and when we started the recce, the first section was. But then we turned and started to go uphill and the road just got more and more narrow.

“At times it was really narrow and rocky and climbing all the time over these blind crests. It was tough.”

But that was just what Alister’s boy wanted.

“To get your pacenotes right on those roads was so demanding,” said McRae Jr. “There was so much detail to get in – and that’s what I needed.

“I need to have this kind of challenge and when you get it right, it’s so satisfying. I loved the event. The car was just fantastic, it didn’t miss a beat.

“It was quite a step on from the Fiesta ST we drove last year. Obviously we’ve got the sequential gearbox and a lot more torque from the engine. That torque really helped in the twisty stuff, but in the faster section it really sailed along.”

The DirtFish-backed Fiesta is now on its way to Tasmania for the next round in early July.

Before that event, McRae will return to racing for the second round of the Radical one-make championship at Wanneroo Raceway next month.

“There’s not much chance to do a lot of rallying on asphalt in Australia,” said McRae, “so it’s fantastic to have this chance to drive the Radical.

“I was third on the opening round earlier this year, so I’ll be looking to take another step – or two – up on the podium.”