Looking back, Andrea Adamo had no idea of the implications, the bad blood and the politics which were being played out before his 15-year-old eyes. All he cared about was that he’d seen Malcolm Wilson for the first time. And, more than that, he’d seen factory Group B cars in full flight.

The Hyundai Motorsport director’s second Rallye Sanremo pick takes us back to 1986, arguably one of the most politically charged rounds of the World Rally Championship in its history.

The makes’ race was coming to the boil with Peugeot 12 points ahead of Lancia after the 1000 Lakes Rally, while Markku Alén was in need of a third Sanremo win to narrow the gap to drivers’ championship leader Juha Kankkunen. Alén would get his win after four days of competition in northern Italy. But that success wouldn’t come easy. Or without controversy.

“I didn’t know anything of that at the time,” said Adamo. “I didn’t know about the atmosphere on the rally or anything. I just wanted to see my heroes. Looking back at it now, it was a crazy time with a situation which was really badly managed.

“For me, I had the chance to go to watch a night stage with my father. The stage was quite close in my region, so he said: “OK, we go…” We were lucky to see the cars being serviced before the stage and that was the first time I saw Malcolm. He was standing at the side of his Metro. But really, we had to rush to get into the stage. Seeing these cars in the dark, hearing them coming and seeing the lights, the flame spitting, the noise of Group B it was incredible. That was the first time I saw cars on a WRC stage and I never forget.”

What played out in the coming days would be written about for years after. And all of those stories would be read by Adamo.

The bare facts are of a timekeeping problem on SS22 [La Selva] towards the end of day two. The time offered by officials to Peugeot driver Andrea Zanussi bore little resemblance to what was on co-driver Paolo Amati’s watch. Peugeot Talbot Sport team principal Jean Todt requested the matter be sorted at the ensuing halt in Siena. The discontent began because Zanussi’s team-mate Bruno Saby had suffered a puncture on SS2, dropping 10 minutes after the car’s jack broke.

There were feelings – certainly among some of the Lancia team – that this situation was being elevated by Todt in the hope of getting the stage neutralised and all times canceled. Such a result would bring Saby back into the race.

Todt, to his credit, couldn’t have been clearer that he sought no change to Saby’s time. Only Zanussi’s.

The matter couldn’t be resolved, so the cars began leg three, with the overall positions still unclear. Arriving back in Sanremo shortly before nine on Wednesday evening, the crews had a full day’s rest before starting the final loop of stages in the Ligurian mountains inland from the coastal down at 2200 Thursday night.

That, so the story goes, is where Lancia team principal Cesare Fiorio began to step up pressure on his countrymen. Hadn’t they seen the side of the 205s? Weren’t they just the sort of unauthorized aerodynamic devices FISA was trying to rid the sport of?

When Peugeot team member Jean-Pierre Nicolas was spotted driving Bruno Saby’s Peugeot along the seafront on Thursday afternoon, something was clearly not right. The car, which should have been in parc fermé, was on its way to a local Peugeot dealer to have the side skirts inspected.

At 1830, the Sanremo stewards declared all three Peugeot 205 T16 E2s illegal and excluded. With no right to appeal. 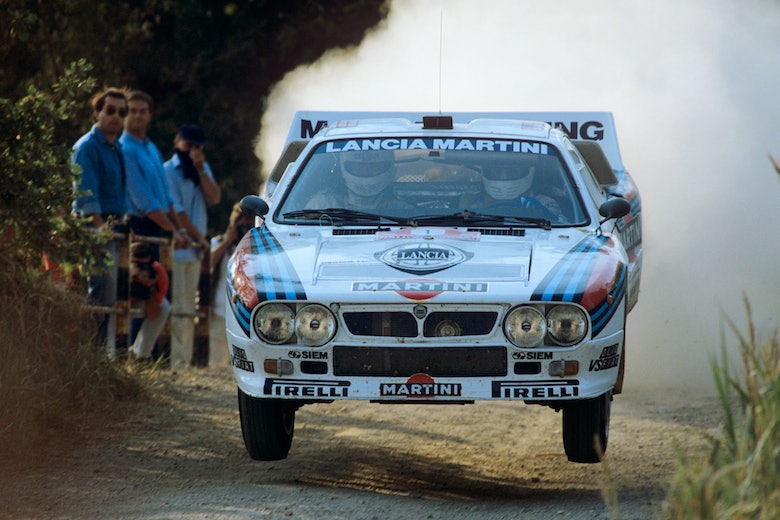 That left three Lancias at the front but running in the wrong order. Miki Biasion and Dario Cerrato were slowed to allow Alén to the front. Admittedly, the Finn had been flying before a pair of punctures and a transmission fault dropped him back.

At the finish, Alén’s victory had closed the gap to Kankkunen to just two points with just the RAC and Olympus Rallies remaining. The gap between Peugeot and Lancia was similarly close. Naturally, Peugeot didn’t allow the matter to rest there and would win on appeal after the season was done. Alén celebrated being world champion for 11 days before handing the crown to Kankkunen.

“The tension was high all the way through that season,” said Adamo, “and race-by-race it was getting more. When Sanremo came, the political tension was at its pinnacle. Let’s not forget that Lancia was recovering back from a big, big, big accident in Corsica that was really demotivating everyone. After this they lost the lead and they lost the one who was really flying with the car [Henri Toivonen]. He was the guy who would bring all the people together.”

Should the Peugeots have been excluded? FISA had issued technical regulations in July, 1986 stating that side skirts were banned, but the governing body’s own technical chief Gabriel Cadringher had allowed them to remain – as had Rally Argentina scrutineers when they appeared on the cars earlier in the season. Adamo’s feeling is that the matter should have been settled before the start.

Adamo: “It’s clear that when you see something like this, you should stop. Not in Sanremo, you should have stopped earlier. These parts were on the car before Sanremo and you should not have been allowed to arrive at this point of excluding the cars. The finger should have been pointed before the start.

“But also, we cannot forget the soap opera when one Peugeot was taken to a wind tunnel to test the skirts – but the wind tunnel was not having a rolling road, so how could that test the ground effect?”

Last question to Andrea, would you have switched the Lancias around to give Alén the win.

“Like I said, the tension was high in Sanremo in 1986. And there was a big political battle between Fiorio and Todt and, of course, there was [FISA president Jean-Marie] Balestre as well. And, don’t forget, Peugeot was also doing a legal action in the European court against [FISA] because of the sudden ban of Group B. We have to understand what might have happened if Peugeot could have won the action. As it was Peugeot won the appeal against the decision from Sanremo.”

And the case against the sport’s governing body was dropped in the middle of the following year.