Sébastien Ogier thought about it. It was a difficult decision. Conditions were shocking and he had completely the wrong rubber beneath him. What to do? If he committed to it, the potential for an embarrassing and very public accident was huge.

But they wouldn’t stop. He knew that. A particularly hardcore bunch of rally fans were ignoring the rain up top and the mud down below to make their presence felt for the eight-time world champion.

In fairness to Ogier, he was never going to ignore them. But he was now faced with probably the most treacherous journey of the week. He’d piloted his Toyota GR Yaris Rally1 through some of the season’s most challenging stages at an average of 62mph, but the next 10 meters demanded the same commitment, with considerably less speed.

Tip-toeing his slick race boots through ankle-deep mud, he made it. Of course he did.

And that wasn’t the first time those shoes had thrilled the crowds. Moments earlier, it was him who whipped his left boot off, filled it with champagne and poured it into the mouths of Kalle Rovanperä and Jonne Halttunen.

South of Auckland on Sunday, there was a genuine feeling of the end of an era.

Ogier won’t turn eight titles to nine, he’s been perfectly clear on that. A French reign that’s been supreme for 17 of the last 18 seasons is at an end. The old guard’s back. Finland, once again, tops the rally world.

Would it not have been better to install Lappi in the car and generate a genuine third contender for the drivers’ title?

I was wrong. Completely wrong.

And Sunday offered plenty more evidence that a part-time Ogier still has his place in this championship. Not only did he finish second and play the perfect team game, but he demonstrated that his fan appeal right across the world remains just as strong as ever. The bloke could barely move without somebody holding a ‘Go Ogier’ sign behind him.

I’m taking this as a positive, of course. It’s possible the Finns had installed an EP-friendly Kiwi to offer direct advice to Séb.

Seriously though, Ogier demonstrated once again what makes him a great champion and ambassador for the WRC. It wasn’t always thus; at the height of his time at Volkswagen, it’s doubtful he would have seen or heard those same fans.

It’s quite possible the outgoing champ was also understanding this could be the last time he races a Rally1 car down the North Island stages. There’s every possibility Rally New Zealand will be back in 2024, but will he still be around in two years?

Regardless, he put on a fantastic show.

And so did the fans.

Kiwis are a hardy and enormously practical bunch of people. That was very much in evidence in Puhoi on Saturday afternoon.

Puhoi translated means slow water. Saturday? Not so much. The rain inland from the Hibiscus Coast was insane. Biblical. There was nothing slow about that water.

Standing high above the Upper Waiwera Road, the Kiwi fans had climbed through farmers’ fields to stand roadside for a double shot of the world’s fastest rally drivers. 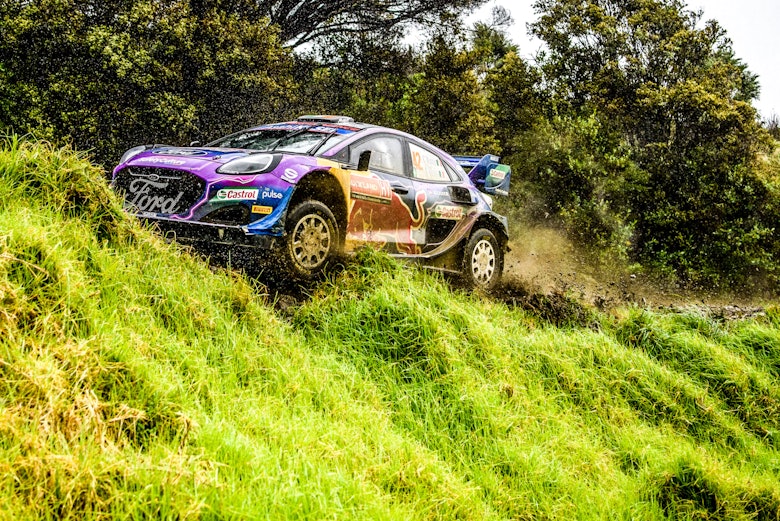 What we learned from 2022 Rally New Zealand

By the time the cars had rattled through for the second time, the weather really had done its thing. The route south through those same fields was insanely muddy. By now the mud had gone well beyond the ankle and was venturing towards mid-shin levels. Certainly, it spilled over the top of the half-length wellies sported by some of the more optimistic/less well-informed fans.

Fallers were picked up, washed off and sent on their way, while quad bikes were despatched to rescue some of the older fans making their way down through the fields. Back on the bitumen, most did what Kiwis do: they took off their boots and socks and walked barefoot back to the car.

Driving against the spectator traffic in search of Takamoto Katsuta’s stricken Toyota, the DirtFish car was slowed for high-fives, bull horns and even the occasional demand to stop the car, decamp and join in a celebratory, rainy selfie.

Were this a boxing match, the referee would be looking to call a halt to it David Evans on the remainder of the WRC season

As a demonstration of what this sport and this event means to these people, the message couldn’t have been louder.

All of that said, there were more disapproving voices than ever before – that’s to say, I’ve never heard a New Zealand accent offering anything other than unconditional support to the rally. This time, certainly on the southerly stages, there were signs of opposition to the rally.

You’ll notice the traditional Whaanga Coast pictures are slightly different, not quite from the same position. That’s because the farmer was reported to have left the attending snappers in no doubt as to what would happen if they set foot on his land to bag said picture of the Tasman Coast backdropping sideways rally cars.

Like everywhere in the world, there’s work to be done on the messaging for local residents. But has the WRC ever been in a stronger position to send a more coherent message? I think not.

Rally New Zealand delivered thousands of bed nights to the capital of the North Island and the fastest of the fast cars came at zero cost to the environment courtesy of 100% fossil-free, sustainable, renewable fuel.

As a championship, the time has come to bang this drum harder than ever.

In terms of competition, last week was another stellar masterclass from Toyota and Rovanperä. The Finn richly deserves the title he and co-driver Halttunen celebrated hard into Sunday night.

For their opposition, the end of the year can’t really come soon enough. Were this a boxing match, the referee would be looking to call a halt to it.

The end of the season can’t come soon enough for Elfyn Evans, Ott Tänak, Thierry Neuville and the rest.

They need an off-season to regroup and look to come back stronger.

The WRC’s first and only visit to the southern hemisphere made for difficult pictures to watch for some around the service park. Right now, Tänak is the only man capable of living with Rovanperä’s pace and all credit to the battling Hyundai driver – he’s doing it at the wheel of an inferior car with a team still making too many mistakes and handing valuable seconds (in the shape of the over-boosting penalties) to its rivals.

Time after time, teams have landed in Auckland with enormously high hopes of a result against the odds. That was the case once again last week. 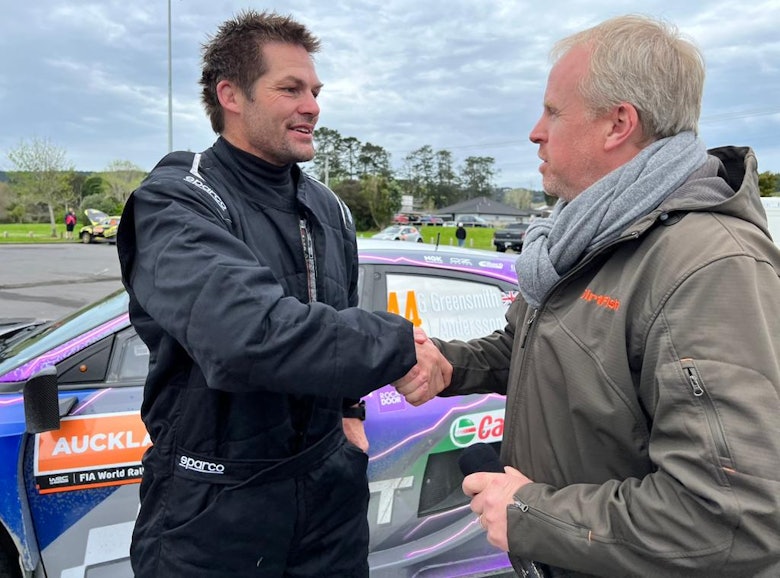 What happened? For New Zealand All Blacks read Toyota and Rovanperä.

And before you reach for the phone Paul Nagle, I’m talking historically rather than in the last few months when Ireland, of course, won their first series in this part of the world. I think I’ve done well. I’ve got all the way to the bottom of this story before talking rugby.

Tänak: Rovanperä gave no one a chance