Rally Portugal winner Elfyn Evans says he was determined not to “fall victim” again following his final-stage defeat in Croatia, but it’s the consistency of his Portuguese performance that left him the most satisfied.

Evans has finished second twice to team-mate Sébastien Ogier already this season – in Monte Carlo and Croatia – but on the latter event, he had led by 3.9 seconds ahead of the powerstage before missing out by 0.6s.

He played down the effect that Rally Croatia had on him pre-event, but when DirtFish put it to him that his performance – and victory – was exactly what he needed, Evans said: “Yeah, it’s a good time to score a victory.” 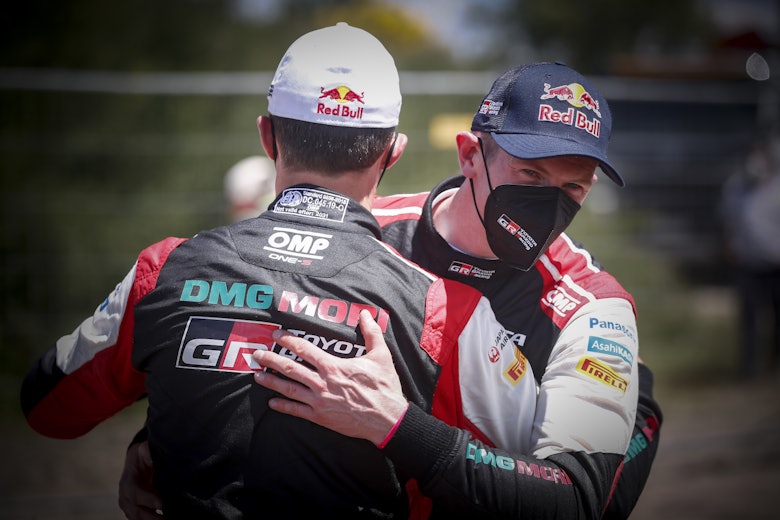 How Evans made the most of Hyundai's Portugal gift

In Portugal, Evans had a 10.7s advantage over Hyundai’s Dani Sordo before the final day but he all-but doubled that on Sunday’s first stage – Felgueiras, which had not been used in over 20 years – to take the sting out of the contest.

“It’s obviously a new stage to the rally and I really enjoyed the look of it to be honest, the profile looked fantastic and obviously I wasn’t going to fall victim to anybody else let’s say and lose another win,” said Evans.

“So I was determined to give a good jot and obviously it was a good run through and I was happy with the time at the end.”

The eventual 28.3s win elevates Evans to second place in the championship ahead of next week’s Rally Italy, two points adrift of Ogier. That gap was created on by the Portuguese powerstage where Ogier claimed three bonus points and Evans one.

“Unfortunately we didn’t have enough tires to really give anything a serious go on the powerstage,” Evans added.

“We had to just focus on being clear in there and actually picking up one point was as good as we could have hoped for really.”

Asked what he was most pleased with from his performance, Evans replied: “The consistency I think to be perfectly honest.

“I think whilst we weren’t always on the Hyundai’s pace there were no big massive drops perhaps like we’ve seen in previous rallies.

“Especially in the likes of Amarante [SS11 and SS14] it would not have really been my forte in the past but I was able to be competitive both passes through which I was happy about.

“I feel like the work that I did and to study beforehand paid off.”

What we learned from 2021 Rally Portugal