The fourth round of the 2021 World Rally Championship is done and dusted, and it was Toyota’s Elfyn Evans that stood higher than them all as he swept to victory on Rally Portugal.

Arguably though it’s a rally that should’ve been Hyundai’s, as three i20 Coupe WRCs locked out the three leading positions before it all went awry.

We’ve already covered Hyundai’s capitulation – if you haven’t read it yet, go check it out here – but what else did we learn from Rally Portugal 2021?

Here’s our main takeaways from the first gravel event of the season:

Rally Portugal was a showreel of what Elfyn Evans does best. He doesn’t need to be the quickest, he just needs to be one of the quickest; and that’s exactly what he achieved with aplomb last week.

Just like on Rally Turkey last year, Evans was there to pounce when an opportunity arose but this time, there was no luck involved.

Ott Tänak was disappearing ahead before his rear-right suspension slowly began to disintegrate, but Evans showed his hand with a string of blistering stage times on Sunday when it really mattered to crush the neutral’s dreams of a thrilling climax to the event. Dani Sordo simply couldn’t match him.

The timing simply couldn’t be better either after Evans’s agonizing final-stage defeat at the hands of Sébastien Ogier in Croatia. What’s more, in losing out to Ogier on the powerstage Evans could benefit further as his team-mate will sweep the road clean in Sardinia. The pair were set to be level on championship points subject to powerstage bonuses.

It’s a familiar situation that Evans finds himself in. While all the likely title contenders Ogier (crash in Arctic), Neuville (crash in Portugal) and Tänak (lack of spare tires available and suspension damage in Portugal) have faltered, Evans is yet to do so and more importantly, looks unlikely to do so too; at least on his own accord.

Evans’s key strength is his consistency – both in terms of results and the high level of speed he can maintain. Driving like that didn’t serve him too badly last year, did it?

Katsuta is the real deal

Evans wasn’t the only Toyota driver to impress in Portugal. Takamoto Katsuta has been quietly effective so far in 2021 – picking up three consecutive sixth places – but he went two better last weekend with a standout fourth.

There had been some small question marks surrounding Katsuta’s ability on gravel after showing strong pace but crashing in both Estonia and Italy last season. Those question marks can now firmly be erased.

To be mixing it with Ogier and battling him all-day long on Saturday, on merit, is a simply sublime achievement and one team principal Jari-Matti Latvala was also very impressed by. His waning pace on Sunday should be taken with a grain of salt too as pushing Ogier hard would not have been of benefit to either Ogier’s personal championship ambitions or Toyota’s manufacturers’ quest.

Perhaps what’s most remarkable about this drive though is the ease at which Katsuta seemed to be able to achieve it. There were no high-profile mistakes, no big dramas. He felt like things could still be improved but it didn’t look like it from the outside.

With speculation surrounding driver line-ups of late, Katsuta does not look a bad shout at all to join Toyota’s works team in 2022 if he keeps up this rich vein of form.

He’ll have a tough job to raise the bar further in Sardinia.

Tänak of old is back, but is it too late?

Ott Tänak can rightfully feel hard-done-by as it appears he did absolutely everything right in Portugal. He was fast but not dangerously so, and even managed to lead after the first day despite feeling like he was “fighting” his Hyundai.

And the suspension failure that ruined his hopes didn’t appear to be something of his own making. DirtFish has watched the full onboard of SS14 back, and there was no big bang or obvious place where Tänak could’ve broken any parts. Galling.

Evans and Latvala were both quick to acknowledge that Tänak and the Hyundai were the fastest package at the weekend, but it’s points that make prizes; not stage victories. How many times have we said this about Tänak’s period at Hyundai now – that he looks to have the potential but for one reason or another, things just aren’t gelling together enough of the time?

Comfort will come from his pace though. And Sardinia is an event that suits Tänak, plus he will again start behind his title rivals in Friday’s running order. Most of all though, Tänak did say something telling at the end of the rally, revealing that he “found a feeling” he hadn’t had in one-and-a-half years. Since he drove a Toyota.

“It’s almost there, but it seems like we have to wait for another time,” he said.

Tänak can’t afford for that other time to be any later than Rally Italy.

Greensmith has turned a real corner

Gus Greensmith has earned his fair share of detractors over the last couple of years, but they were auspiciously quiet throughout last weekend’s Rally Portugal. Nobody expected the M-Sport driver to be within half a second of the leader after stage one, and nobody expected him to sustain that strong turn of pace either.

Bravo Mr Greensmith. Yes, he had a better road position than most and yes, this was just one event – we need to see this on a more consistent basis – but this was unquestionably Greensmith’s best performance behind the wheel of a World Rally Car.

There were a couple of contributing factors. The fact that Portugal is Greensmith’s favorite rally, and one he’s done before in the Fiesta WRC, can’t have hurt but chiefly new co-driver Chris Patterson is, in Greensmith’s words “unlocking something inside me”.

Greensmith drove with real assurance last week, even when problems – a third stage puncture and an irritating, intermittent throttle problem – plagued him he didn’t get frustrated like he may have done just a few months ago.

The 24-year-old looked a sorry state when he was being outpaced and outclassed by Adrien Fourmaux’s Ford Fiesta Rally2 car on the Monte Carlo Rally.

That version of Greensmith is barely recognizable to the one we saw in Portugal – and don’t underestimate the importance of him taking the limelight off of his young hotshot team-mate either. Now it’s time for him to prove this was no flash in the pan.

From one transformed man to one that’s threatening to get stuck in a rut, Kalle Rovanperä just wasn’t quite at the races on Rally Portugal.

Rovanperä is a victim of his own success when it comes to any appraisals. Portugal was still just the 20-year-old’s 11th event in a World Rally Car in the world championship – so in effect he’s still completed less than a normal full season.

But the bar he has set for himself has been so high that his (lack of) pace in Portugal – let alone the mysterious technical problem which Toyota has refused to shed any light on – is viewed as a bit of a disappointment.

Several of Rovanperä’s rivals would have bitten their limbs off to have his starting position of fifth on Friday. But the Finn couldn’t make the most of it, struggling with the set-up of his Yaris WRC on the first pass of the stages. Indeed, he immediately set the fastest time on the first stage that was repeated. That needs ironed out, and he knows it.

On the whole Rovanperä looked to be the weakest of all of Toyota’s four drivers. We can’t expect 10/10 performances every weekend, but he was fairly anonymous in Portugal. While the retirement, we assume, was not his fault, it was easy to forget he had actually dropped out as he was making little impression on the leaderboard before it.

With the low of his Croatian crash and now a flat run in Portugal, Rovanperä could do with a well-timed pick-me-up in the Mediterranean next week to remind us all why he’s so special.

Gryazin is a future talent (if not already)

Nikolay Gryazin’s talent is becoming impossible to ignore. There are some that will point to his strong support and how that’s helped him reach this position, but you can’t deny he’s making the most of what’s at his disposal at the moment.

His season in the Hyundai fold didn’t really work out, but now armed with Volkswagen’s Polo GT R5 he is a real dangerman. Some of his stage times at the weekend were borderline ridiculous; sixth fastest on Sunday’s opener was a stellar effort, just 12.7s slower than Evans’s Yaris which was on a blistering run.

But problems out of Gryazin’s control hurt his event – just like Croatia. In Portugal it was a sick turbo, which Gryazin joked meant “this car will not be getting a sweet after the race”. Before the problems, the Russian was just 2.2s off the class leader.

And don’t forget, this was against a WRC winner in Esapekka Lappi, a podium finisher in Teemu Suninen and another WRC winner in Mads Østberg. Gryazin absolutely held his own in such esteemed company, which won’t have gone unnoticed.

The WRC2 battle itself was a bit of an anti-climax though. Everything was bubbling up perfectly after Friday with Lappi and Suninen sharing the lead but thereafter Lappi eased clear as everyone else ran into trouble. The return of Andreas Mikkelsen and Adrien Fourmaux to the equation in Italy should help keep interest up though.

It all feels a bit Formula 1 circa 2011, discussing teams in a world championship struggling to understand and extract the most out of Pirelli’s rubber.

That’s not to criticize the job Pirelli has done with its 2021 WRC tires, by the way.

The point is they’re different to what the service park is used to, and perhaps more than the teams had expected. Two of the manufacturers had never competed in the WRC with anything other than Michelins which would be subtly evolved from year to year rather than be significantly revolutionized. The last time the other team ran Pirelli covers was over a decade ago.

Portugal was the first time Pirelli’s gravel tires were used in the WRC after events on ice, snow and asphalt. With just a few days of testing beforehand, it was a genuine step into the unknown and it was interesting to hear rally leader Evans mention how it affected the balance of his Yaris.

“I think the car was working pretty well on the Michelin but of course with the Pirelli things change,” he told DirtFish. “And it’s often the case when you have a new tire you need to adapt.

Fine-tuning is exactly what Evans and his counterparts will do, but the race to understand the new rubber is another exciting element to a WRC season that is hotting up rather nicely.

How Evans made the most of Hyundai’s Portugal gift 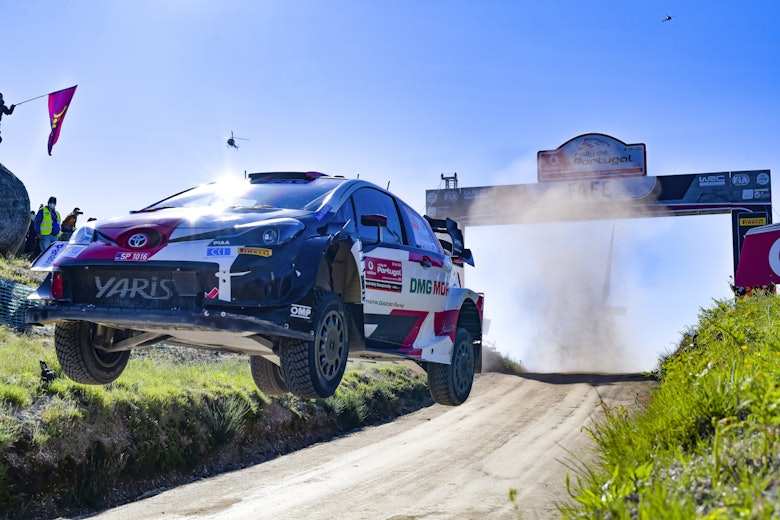 Video: Unpacking the drama of the Rally Portugal weekend

How Evans made the most of Hyundai’s Portugal gift