Sir Edmund Hillary, I have a small idea of how you felt this week 69 years ago. Difficult as it might sound to compare a hillside above Lousada with the world’s tallest mountain, today they were as one.

And lunchtime started so well. Our favorite café in Arganil. A coffee, a cheese and ham toastie, a pastel de nata and possibly even a cheeky Toblerone ice cream. Then Sébastien Loeb slapped the wall outside the first left-hander on stage five and that was that.

Skip the coffee, toastie to go, hold the custard tart and forget the Toblerone.

Here at DirtFish, we’re all about the story. On Friday morning, that story was Loeb leading on his first gravel round of the World Rally Championship since Rally Turkey almost two years ago.

At the top of 2022, the masterful Frenchman won the most anticipated Monte in years. After taking Sweden and Croatia off, he returned for round four. As the first gravel encounter for the new hybrid generation of cars, Friday morning south of Porto generated a similar sense of expectation.

And once again, it was Loeb who showed everybody the way home after the first four stages.

Ahead of the event – as, from memory, we had done in the Alps in January – Colin Clark and I had pretty much dismissed Loeb’s chances. How could he?

He could. He’s Sébastien Loeb in an M-Sport Ford Puma Rally1 Hybrid.

Settling in to watch the second run at Lousã unfold, lunch landed seconds before the connection of car #19’s right-rear wheel and a big slab of concrete wall.

The moment @SebastienLoeb crashed out of the lead on #WRC @rallydeportugal 😭

The story was calling.

In less than an hour, we were at the start of SS5. Having been there in the morning, we knew the place, the corner and the concrete. With the offending wheel fairly well disconnected from the Puma, we were confident Loeb would have backed the car into the junction just a hop, skip and a jump off the start.

With the marshals sensible advice ringing in our ears we ran the couple of hundred meters to the first corner. No Loeb. But plenty of police, officials and bomberos.

The stage commander was a lovely chap, but rightly advised against running up the road. It was narrow, rough, rocky and horribly dusty. Instead, he offered us a chat and a bottle of water as we waited for the last car to go through the stage – after which we would be allowed to pursue our prey. 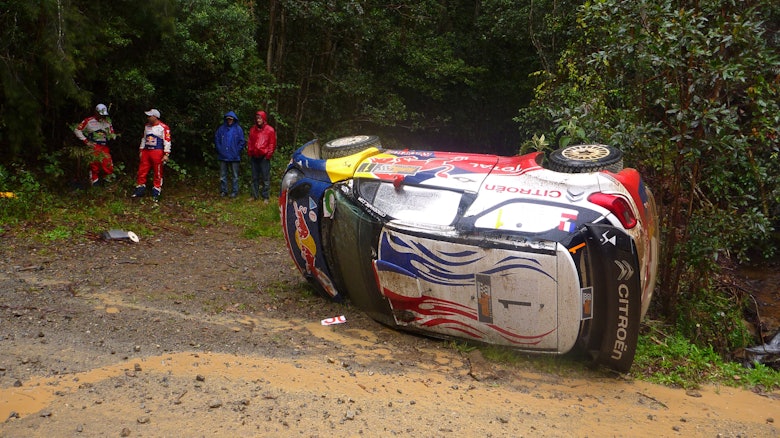 The last time Loeb and Ogier retired on the same day

“He continued,” said our official friend. “The wheel was off, but he continued up the road. He is 700 meters from here. But it’s too narrow.”

Unfortunately, there was zero service from the telephone from that position, so we dashed back to the car to relay what we knew.

With comms back up and running, the DirtFish newsdesk back at base provided a precise location of Loeb’s car and Colin and I knew immediately what was coming.

We were climbing a mountain.

I’ll be honest, Everest might have the edge in terms of the chilliness and the need for oxygen – and there are probably less trees to grab hold of as you near the top of the world. But in terms of gradient, we were right up there with the steepest of the steep.

I’d fully intended to film or take some pictures of Colin and I on our ascent, but halfway up the pair of us were clinging to pretty much anything we could get our hands on seriously regretting the decision we took 10 minutes earlier.

Pictures were not an option.

Clambering up the final rocks, totally covered in dust, sweat and with more than the odd splinter, we caught site of the roof of a Ford Puma. Rarely has a the site of a broken motor been more welcome.

Sitting in the trees opposite the car were Loeb, co-driver Isabelle Galmiche and Andrea Adamo. Andrea would have been more a part of the adventure if he hadn’t gone up the mountain like a rat up a drainpipe and made it look far too easy and not enough like he was scaling the last couple of hundred meters of Everest.

Our arrival caused much amusement among them.

They stopped laughing long enough to drink our water and listen to our story of how steep the hill was.

The following hour and a bit was slightly surreal as we sat and chatted about all manner of things, including the prevalence of Eucalyptus trees in Portugal and the time Loeb crashed his Citroën Xsara WRC in Australia, having been distracted by seeing team principal Guy Fréquelin standing in a corner. It didn’t take Loeb’s boss long to arrive at the scene of the shunt.

What did Séb say?

The arrival of a rock in the party livened things up slightly. One of the cars running further down the order had hugged an increasingly dug-out line and flicked the boulder in our direction. Inspecting the exposed bedrock, I asked Loeb if that could damage the car.

“Definitely,” was the reply, “especially if you are on the brakes.”

No word of a lie, the next car through – an especially committed Peugeot 208 Rally4 – touched the brakes having seen the unavoidable rock on the line, broke the steering and understeered off at the following left-hander.

Galmiche jumped down the bank to slow the next car down, while Loeb went to greet the driver of car #97. 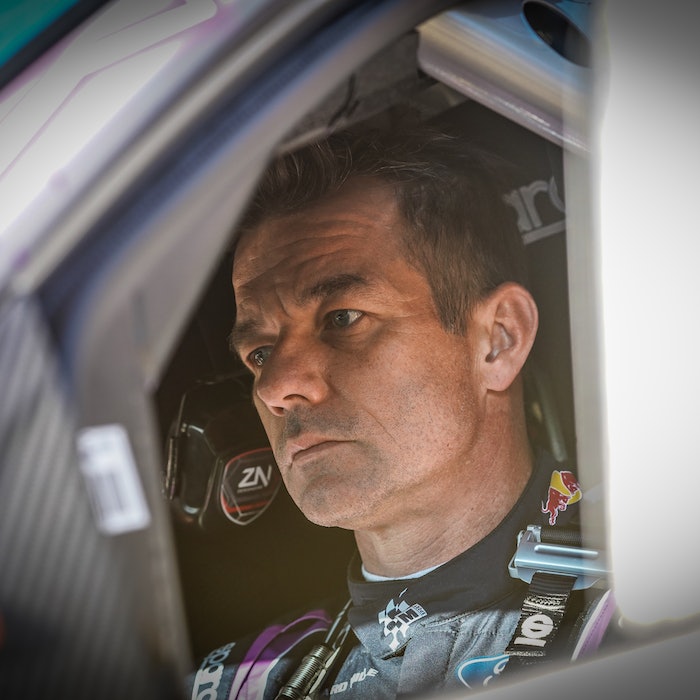 “I don’t think there are many walls on this rally, but I had to find the corner with a wall on… Sébastien Loeb

Gabeiras Fraga was furious at his early exit from Friday afternoon and emerged from the car with a serious Spanish scowl. There was something of a doubletake when a nine-time world champion emerged from the trees to tell him what he’d hit.

With another couple of cars, the stage was done and the recovery truck arrived to take Loeb’s stricken Puma home.

M-Sport’s Monte winning superstars started to collect their empty water bottles, but Clark insisted on doing it for them.

They laughed. They thought he was joking…

Walking out of the stage, Loeb stopped to inspect the wall.

“I don’t think there are many walls on this rally,” he said. “But I had to find the corner with a wall on…”

Ending the afternoon on a professional high, Col asked him if he thought he’d got his line in a bit wide.

Loeb’s the loveliest of fellas, but he couldn’t resist this one. He looked like a man giving it some serious thought before adding some heavy irony.

Time to go. There was a cold coffee and a warm Toblerone waiting.