Rally Portugal didn’t exactly work out like Gus Greensmith had planned, did it?

It might perhaps seem a bit unfair to expect the M-Sport driver to achieve a podium finish – his first in the World Rally Championship – up against 11 other Rally1 drivers, including every world champion since 2004.

But those are the parameters he set for himself in the pre-event build-up, so that’s how we must judge his performance. And, looking at it flippantly, he completely failed the mission.

Nineteenth overall is a long way from third (or higher). Of course, Greensmith’s prospects of a points finish were dashed when he retired with a suspension problem on the road section to SS15, Amarante on Saturday, but before then he’d only been eighth.

However, as always in rallying, a performance stretches far beyond the raw numbers. Although he may have missed out on the top three, Greensmith never actually said that he would get a podium in Portugal, just that that was his ambition.

And that’s why Greensmith doesn’t feel like he completely failed his self-assigned objective.

“I would disagree there,” he said when DirtFish put it to him that the rally hadn’t at all panned out how the way he’d hoped.

“I’d say that it did work out in some ways, we were in a position to fight for the podium after Friday. So that was one step that we made. 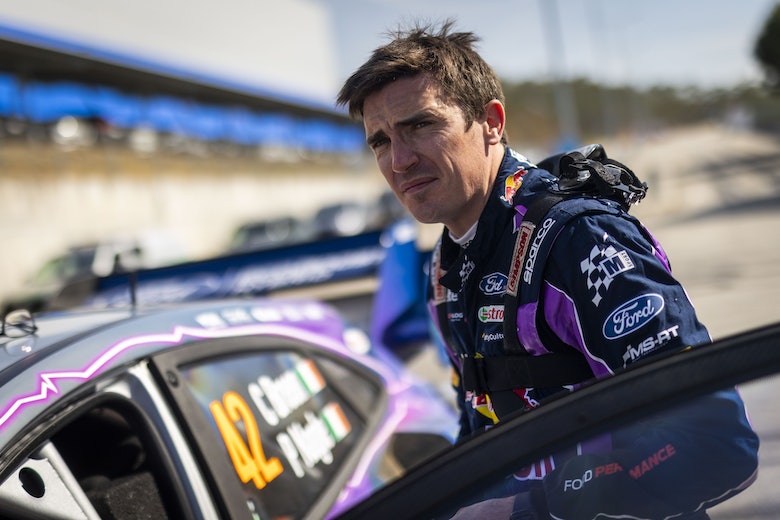 “We hadn’t been in that position yet in my career, without like other people falling away. So that was one positive step, we put ourselves in a position to fight for it.

“Obviously a puncture and also very bad tire choice on Saturday killed any hopes anyway. But we still put ourselves in a position to fight for it.”

Greensmith was indeed a strong second overall after the first gravel stage on Friday morning, only bested by Elfyn Evans who produced an insane performance on Lousã.

That was the highest Greensmith’s name had ever featured on a WRC leaderboard, but he soon tumbled backwards on the very next stage when dust found its way into the cockpit of his Puma Rally1 – an issue that afflicted most of his team-mates too.

Such is the closeness of the competition in the WRC, Greensmith was suddenly down in 10th but managed to climb up to fifth by the end of the day.

A puncture on Saturday morning’s opener pegged him back once more but he felt like he’d made the wrong tire choice anyway.

Greensmith then clipped what he described as a “soft bank” that had “something hard hidden” in it, damaging his rear-right wheel and ultimately led to his retirement. Sunday was therefore just about experience and survival.

All in all, Greensmith is right – he did make a step forward. But if he’s to make that next step forward and sustain a longer podium challenge, and even get himself on it come the end of the rally, he needs to be able to keep up podium pace for longer.

The dust issue in Portugal was unfortunate as it wasn’t of his own doing, but Greensmith is the first one to admit that it’s not on his good stages, but his bad stages, where he’s currently falling short of the podium.

“I think we just need to do the same as what we did on Friday,” he said when asked by DirtFish what he needs to do to make the podium.

“I think I need to start to improve my bad stages rather than giving away 10 seconds. And that’s what I’ve tended to do this weekend, like I say, just 10 seconds, and I’ll make time back.

“But then I made that time back over two or three stages. So I think I spend quite a lot of time this weekend [before Sardinia] trying to find a way to reduce the bad stages that I have. So I lose maybe five seconds over 10.”

If Greensmith can make gains in that regard, would it really be so crazy to see him lingering around the top three on Rally Italy – particularly with such a good road position of seventh on Friday?

As he quite rightfully admitted: “We’re headed in the right direction. We just need to keep going.”

Hyundai ‘one year behind’ on reliability