Matthew Wilson stepped out of the car and grinned. Then he grinned some more. That’s testing M-Sport’s Ford Puma Rally1 in Finland for you.

The Briton, who drove the car for two days last week, hadn’t flown through Finland for 10 years. But you’d never have guessed at a decade’s absence from the side of one very famous road just south-west of Jyväskylä.

“I don’t care what anybody says,” said Wilson. “If you don’t finish driving that road in that car with the biggest smile on your face, there’s something wrong with you. Honestly, I genuinely started grinning at eight o’clock in the morning and I smiled all day long.”

“I know we’ve talked about this before, but if there is anybody out there who’s wondering what these cars are going to be like; if there’s anybody who still has some doubts about whether they’re going to be spectacular or not… go and have a look at the footage from the tests. I think we’ve helped answer that again this week.

“We used Ouninpohja and a medium-width road which had some more technical parts in it for the other day. It was the first time we’ve run the car on really high-speed gravel and it worked so, so well.”

Prior to Finland, the Puma Rally1 prototype has run in its native Cumbrian woods as well as the rougher, rockier roads of Spain and France. Finland was the first time it had really been allowed to stretch its legs on the loose.

“In terms of grip, the road was typical Finland,” said Wilson. “We had a little bit of rain overnight, but then it was nice and dry and without any loose gravel on top. The grip was fantastic.”

That fantastic grip offered what Wilson described as the most graphic demonstration yet of what hybrid power really would mean for the World Rally Championship.

“Because of the grip and the speed of the roads, we were in a higher gear when the hybrid was deployed,” Wilson explained.

I’ll be honest, I’ve never felt as comfortable in a top-line car as I did with this one last week Matthew Wilson

“That meant less wheelspin and a massive kick in the back. It was just incredible. On a lot of the other gravel tests we’ve been using hybrid out of slower junctions and corners, but here when you’re in fourth and fifth-gear corners and getting the full boost, it’s very, very impressive.

“Put it this way, you hold on tight!”

Wilson added that the latest test was also the most comfortable he’d felt in the car.

“I’ve been away from Finland for 10 years,” he said. “I wasn’t just so sure what it would be like for the pace to come flying over these jumps again, but very quickly I was able to bring the car to a really good speed.

“I’ll be honest, I’ve never felt as comfortable in a top-line car as I did with this one this week. Obviously we’ve got a slightly longer wheelbase which gave us a bit more stability in the very high-speed, but it all just felt really natural and really comfortable. 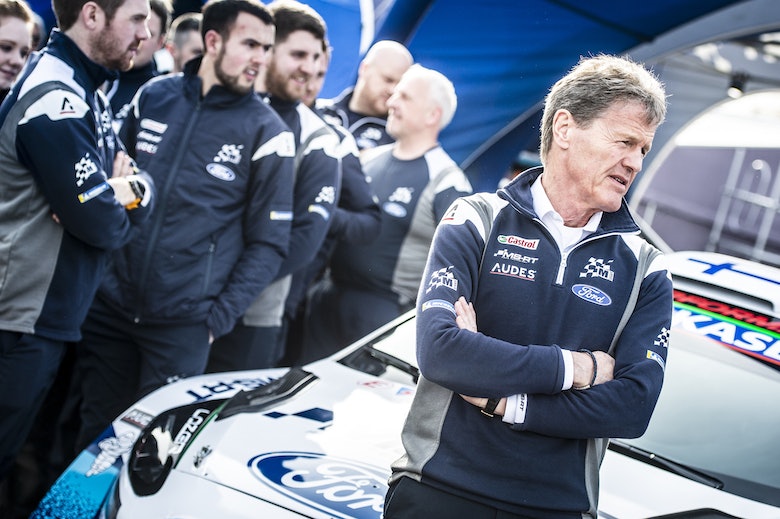 “I think this probably has something to do with the safety side of things as well. You’re so cocooned in these new cars, you’re really pushed into the middle of the car and you have that big extra door bar in the cage. I honestly think these are the safest cars – safest World Rally Cars – ever built.”

Eventually, Wilson’s running time was done and he had to hand the car over to Adrien Fourmaux for the Frenchman to conclude the test plan.

“It’s been a fantastic week,” he concluded after relinquishing driving duties to M-Sport’s current WRC driver.

“We’ve done lots of work with the car. Obviously we had a plan for the test, we’ve gone through all of that without any issues. We’ve done a lot of kilometers with the car now, so as you can expect, when we come to a place like Finland we’re looking to fine-tune the car to the road and the conditions rather than making major development steps.

“But, honestly, what a great week. I’d forgotten how much I miss Finland. Especially in a car like that.”