You know. I know. Thierry Neuville knows. Hyundai’s Rally1 contender is the least reliable of the bunch in the World Rally Championship this year.

From driveshafts breaking to fumes entering the cockpit and an air intake that hoovered up sand in Kenya, there have been reliability issues across the spectrum for the Hyundai i20 N Rally1.

Neuville has, understandably, gotten fed up talking about it. He gives the subject a short shrift when DirtFish probes him about what changes could come before Finland to improve the car further.

“We will not start talking about those issues again,” he says. “We have talked enough about it. We stay positive, we continue fighting. There’s always a little hope for some improvements.”

There is at least one improvement coming for Finland, we’ve learned. New aero? No, it’s not that. Improved dampers? Not that either.

Doesn’t sound that important, does it? Turns out it very much is.

Neuville’s seat was moving. It was still very much bolted in and safe with no safety implications, according to the team itself. But this is the highest level of rallying. Every detail matters. Drivers rely on feeling and the consistency of that feeling. Suddenly finding yourself sat out of alignment, even by an inch or two, throws a driver’s internal calibration all out of whack.

It’s been bugging him for a while now. 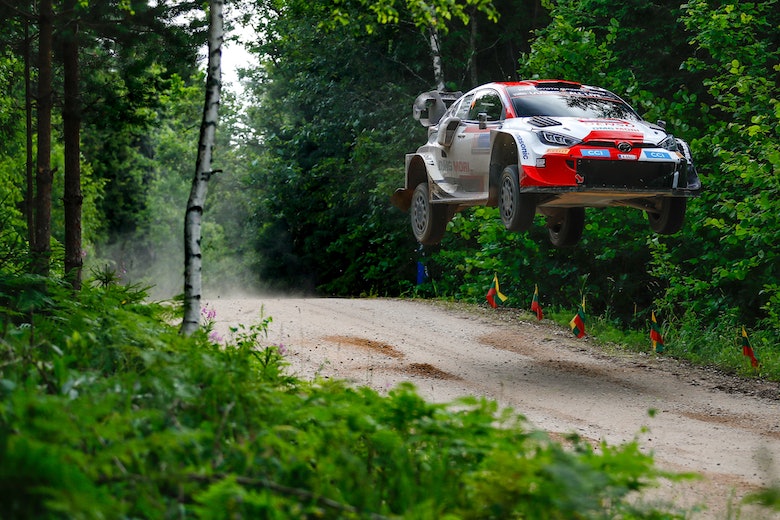 “Unfortunately, since Croatia we have realized on some lateral landings and big impacts that the brackets are moving,” he explained. “We are sitting quite high in the car so the brackets are quite long, and with the weight, we have felt it bend.

“It’s very uncomfortable to drive with the steering wheel out of the center and it feels like you have a punctured tire.”

On the Sunday morning of Rally Estonia, it bent enough that Hyundai had to make a request to the FIA to replace the seat brackets during the regroup before the final loop of stages. They were changed and Neuville went on his way, wrapping up the fourth place he’d held for so long.

In among the litany of issues they’ve faced this year, a bendy seat bracket seems small potatoes. It is, in theory, not a component where there’s much performance to be gained. That said, before the car’s initial homologation, they had a choice between taking the stock OMP brackets or creating their own – and Hyundai did the latter.

Rally1 cars homologated from this year onwards won’t have that option. They’ll have to take what the seat manufacturer gives them.

You could forgive Hyundai for not prioritizing a fix for this. Despite what it sounds like, it’s not a safety issue – these brackets are designed to bend upon heavy loads in case of an accident. It’s just that it’s bending at inopportune moments.

The issue? There’s nowhere worse to have such a problem than Finland. Rallying’s home of big jumps and crests is not the place where you want a problem that’s triggered by lateral landings left unresolved.

Deputy team director Julien Moncet has already indicated that the level of performance issues that need resolving is larger than the number of homologation jokers available. If the part is safe, then they could be forgiven for shunting this one right to the bottom of the to-do list.

“Seat brackets are designed and homologated according to the FIA stiffness safety requirements and have successfully passed the homologation test. The issue is sorted for Finland,” Moncet told DirtFish.

It’s definitely not the magic bullet that will transform the Hyundai into a car capable of matching the all-conquering Toyota. But at least they’re rattling through that to-do list.