Road sections are dull. Nothing ever really happens on road sections. Until it does. And it certainly did on Sunday. When Sébastien Ogier’s Toyota Yaris WRC met a black BMW 1 Series on the road north out of Zagreb at 7am, the DirtFish day was set.

The original plan was to film a final-day preview near the control at the end of the opener, the 15.65-mile dash from Bliznec to Pila. After that, we would follow Ogier, as rally leader, to the next stage – just in case any of the factory cars were carrying any damage in what had developed into an absolute thriller of a finish.

Watching the cars rip through the final uber-quick right-hander was sensational. The pace built and built and built, with Evans breaking the beam at 14m04.5s.

At this point I was engaged in a fascinating chat with a local who knew the stage well. Running in the opposite direction, this stretch was, apparently, a well-known hillclimb. Up top? Snow, according to my new friend.

Then Ogier sliced through the bend in front of us.

We ran. This was why we were here (Ogier, not one man and his dog).

Just away from the SS17 stop line, where the leader admitted he hadn’t driven particularly well and had shipped 2.7s of his 6.9-second advantage, he stopped to check the door on Julien Ingrassia’s side.

At that point, we reported the damage, thinking it had come on the stage. Moments later, sources informed us of a road accident ahead of SS17. Then came Boris Berakovic’s video. Little did Berakovic know when he woke on Sunday morning, he would produce motorsport’s most talked about clip of the weekend.

It showed Ogier switching from the middle to the inside lane of a dual carriageway, only to find a BMW arriving into the same space. The ensuing shunt cut into the door on Ingrassia’s side, exposing the safety foam and inhibiting the door’s ability to close properly.

Approximately five miles from the start of SS18, Ogier pulled into the entrance to a disused quarry. He stopped his Yaris WRC directly behind the sister car of team-mate Evans.

There was little, if any, discussion between the two crews as they set about their work. Evans was working on tires and tire pressures, Ogier was doing the same while working to keep Ingrassia’s door shut with tank tape and ingenuity.

By this point, sources in rally HQ had confirmed Toyota #1 had captured the interest of the FIA’s technical department.

The FIA has the right to stop and inspect any of the cars competing in the event and, it transpired, that’s what it intended to do. Would it before SS18? No.

DirtFish followed Ogier into the arrival control and watched him disappear off the line without any inspection from the governing body.

“Don’t forget, the FIA doesn’t have people all over the route,” one source reminded DirtFish. “Once they’re aware of the incident, a member of the technical department has to be mobilized and dispatched to inspect the car. Once that’s done, the FIA makes a report to the stewards on whether the car can continue or not.”

Sitting on the line, from the inside, the only difference was with Ingrassia’s helmet. With the door opening as the car progressed through the stage, he’d elected to lower the visor element of his helmet to keep the additional windflow out of his eyes.

At the end of SS18, Ogier emerged and headed straight for the refuel a couple of miles down the road.

Where the FIA was waiting for him. The member of the technical department inspected the door and Ogier continued towards the next stage.

It was during this 47-mile road section that things started to heat up, with conversations and suggestions bouncing around in all directions.

We stayed with Ogier. He stopped to work on his tires (potentially fitting the two new hard compound P Zeros he had in the boot) before going through the toll booth onto the motorway south.

That done, he continued back towards Zagreb and the start of the penultimate test. Pulling over at a junction on the outskirts of the city, he stopped and waited. And waited. Elfyn Evans came through warming his brakes up – much to the bemusement of an elderly couple on the number seven tram bound for Dubec – but still Ogier did not.

It’s not unusual for crews to sit and wait, so they can avoid waiting at the startline. You get this lots on really hot rallies, where a driver will pull over in the shade rather than risk arriving at the start and have the car soaking up the heat for 10 minutes or so.

It wasn’t that hot on Sunday morning.

Eventually, Ogier pulled away and made his way through Zagreb to the start of the penultimate stage and went in almost on his minute.

By then, DirtFish had already received intel that the stewards had given the car the all-clear. The French-flagged Yaris WRC was good to go to the finish. Just as well for Ogier, who regrouped and overturned a deficit on the powerstage to seal a devastating win.

It was around that time, further questions were being asked about who did what when the police were interested in discussing the accident. 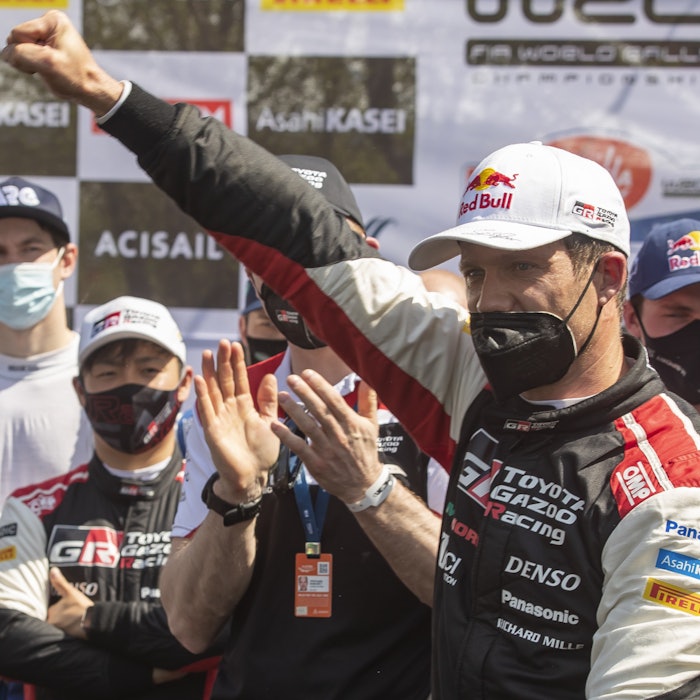 Our comprehensive end of rally report, as Ogier overturned a deficit on the powerstage to win Croatia's first WRC event

There will, no doubt, be plenty more to discuss as this one rolls on through the closing day of what, even before those events, had already been a lively Rally Croatia for Toyota.

The question of what happens next is an interesting one. Toyota’s rivals could protest Ogier’s victory, which would involve a lengthy discussion in the stewards’ room. Sources say the result of any such inquiry could range from a slap on the wrist to a question mark being raised over Ogier’s participation in Portugal at round four.

What do I think? Who knows. It’s impossible not to feel a degree of sympathy for Ogier, who went about his business on the stages in a typically superb style. It will, I fear, be what happened between the stages, rather than his victory, that defines this rally for the seven-time champion.