Thierry Neuville won three out of four stages on the Friday morning loop to build an early leading advantage aboard his Hyundai i20 Coupe WRC.

His lead was chipped away on Friday afternoon by the Toyota duo of Sébastien Ogier and Elfyn Evans, but he still came into Saturday’s stages with a 7.7-second lead.

However, his advantage was wiped out on Saturday’s opening test and he dropped to third place while Ogier and Evans completed a Toyota 1-2. 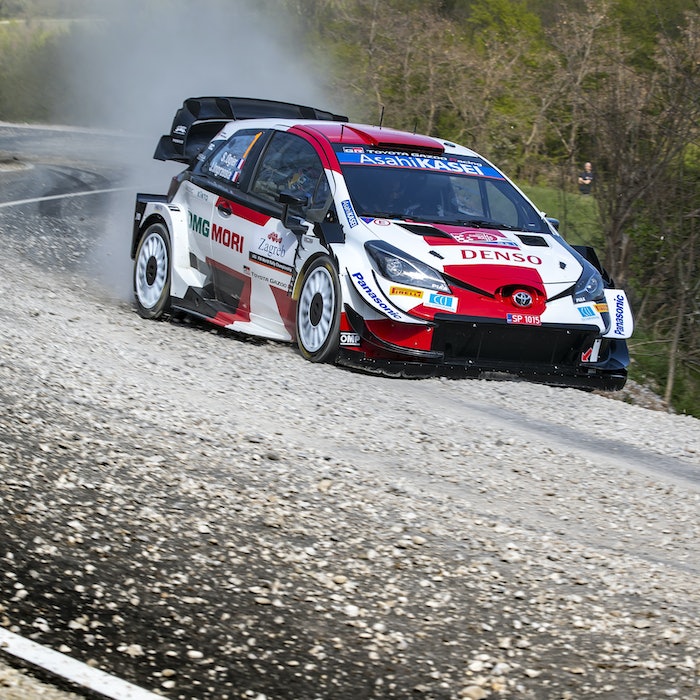 Read our full report from the final stage of the Saturday morning loop, as new leader Sébastien Ogier increased his lead

Neuville’s deficit to the new rally-leader Ogier had ballooned to 19.6s by the time of the midday service, and he was left ruing the decision for Hyundai to send its drivers out to the morning stages with a mix of the soft and hard compound tires while the Toyota drivers brought hard tires only.

On Friday, Hyundai split its tire strategy amongst its three drivers, but it gave all of its drivers the same tire mix for Saturday morning.

“Basically yesterday we f***** up just partially, this morning we f***** up totally,” Hyundai team principal Adamo admitted to DirtFish.

“For sure, I have done a mistake because I didn’t organize things [correctly]. And it’s part of the job that I have to do that.

“In the last three years I’ve worked for Hyundai in this position. I think every time we’ve had to make a difficult tire choice, we’ve never really picked the proper one.

“If you want to solve the thing, you have to identify the issue, if you tell yourself bulls*** you’ll never improve.”

Neuville’s team-mate Ott Tänak was a distant fourth after the morning’s stages, while Craig Breen dropped from fifth to ninth place with a puncture on the opening stage and he currently remains in that position.

With the Saturday morning loop repeated in the afternoon, there is little doubt that the leading drivers will only go for the hard tires considering the increasingly dirty roads.

“Now there are no gambles to take,” Adamo added.

“The tire choice for this afternoon is pretty obvious and evident. We’ll have to ask our rivals for miracles to catch up and cover the mistake that we did.”

Neuville, who had a number of issues on Saturday morning, was surprised by how different conditions were on the stages to what had been predicted.

“We thought that we might miss grip especially on the first stage and we needed some soft tires as the temperatures that were announced were really cold, but to be honest the situation was quite different when we arrived to the stage,” he said.

“But we had to go with that anyhow so I tried to do my best but we didn’t have a trouble-free morning. We stalled the engine in the hairpin and I took long time to restart. We had as well broken rear [brake] disc on the last stage so a lot of things going on.

“An eventful morning for us but the afternoon can only be better.

“Everything can happen, we also had a slow puncture on the last stage in addition to the broken rear disc so we see that even when you’re not pushing 100% things can go wrong so we continue fighting as always.

“We are in third position and we have a little gap behind but in the front it’s still close so we’re going to keep believing.”