And yet, it’s a driver who’s started five times fewer events in a Rally2 this year than Mikkelsen that’s in the box seat, making a one-off appearance in a Toyota Yaris WRC on next month’s Rally Finland that’s widely expected to lead to more outings next season, ride sharing with departing World Rally Champion Sébastien Ogier.

It provokes one obvious question: why? Why is it Esapekka Lappi that’s earned that opportunity, and not Mikkelsen?

There’s arguably more attention on the Rally2 class than ever before in 2021, simply due to the quality packed within the ranks. As well as the usual aspiring future stars that command attention, there’s been current and ex-works drivers in the mix including Mads Østberg, Teemu Suninen, Adrien Fourmaux and Oliver Solberg as well as Mikkelsen and Lappi. 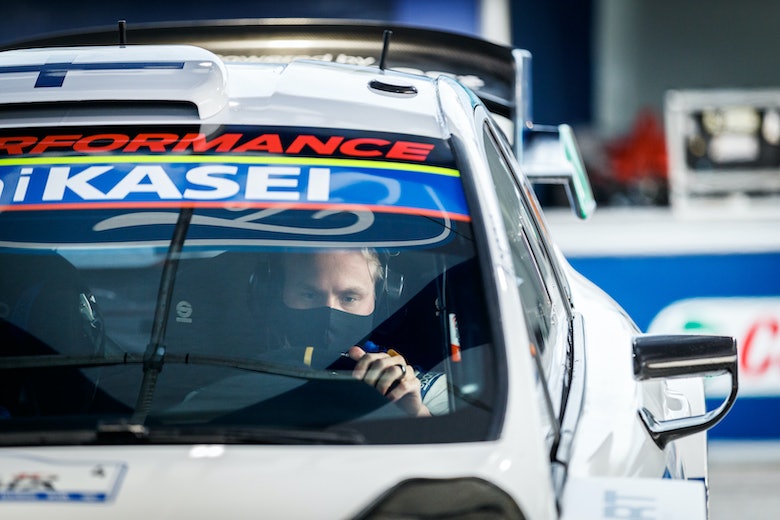 It certainly isn’t misguided to suggest that on some WRC rounds, the quality of the support class line-up has rivaled that of the main event. As a result, for drivers like Mikkelsen who are fighting for a route back into the WRC, it’s the perfect place to remind everybody what they can do behind the wheel.

That was the former Volkswagen, Citroën and Hyundai driver’s ambition at the start of the season. In fact, what he wanted to do was “dominate” his opposition in the class and prove to the works teams that he was the driver they needed for 2022 and beyond.

It started extremely well on the Monte Carlo Rally as Mikkelsen was a cut above the rest, winning WRC2 by almost two minutes and placing ahead of Gus Greensmith’s World Rally Car in seventh overall.

Dominant? Absolutely. It certainly caught the attention, particularly as it succeeded a WRC3 win on the Monza Rally in December 2020 and a comeback victory on Rally Hungary in the ERC.

But then Arctic Rally Finland happened.

Mikkelsen (and the entire WRC2 field) were destroyed by Lappi’s Volkswagen Polo GTI R5. Obliterated even. Nobody got a look in until SS8 of 10 where Lappi was finally edged, but by then his lead was close to 50 seconds.

It was a crushing performance, and suddenly Lappi was the one everybody was talking about in the support ranks. The notion that it was a winter rally which suits Lappi doesn’t really hold water either, as Mikkelsen was always a strong contender on Rally Sweden in a Polo R WRC.

Lappi’s second and final appearance of the season came in Portugal where he checked out with another win, 1m42.8s up on former M-Sport team-mate Suninen.

However, it must be noted that Mikkelsen was ruled out of the contest with COVID-19, so he was robbed of a potential shot at revenge.

It’s impossible to answer whether Mikkelsen could’ve matched or beaten Lappi in Portugal, but it’s equally hard to argue that Mikkelsen’s case for promotion has been more compelling than Lappi’s.

In a rather ironic twist of fate, it’s Lappi who’s achieved Mikkelsen’s pre-season goal in dominating the opposition. Mikkelsen had the right idea, he was just beaten to the execution of it by Lappi.

Instead, he has shifted his tactic to banking points and ensuring he ends the season as a world and European champion.

It will depend on your own personal values and outlook as to which you feel is more impressive – winning two major titles or making your opponents look average on select rallies. But it’s clear to see that the latter is the one that’s currently having the biggest impact.

Østberg is a perfect case-in point. Perhaps if he was an unproven star, winning last year’s WRC2 title would’ve been enough to earn him a seat at the top of the tree. But despite how impressive he drove and is continuing to drive Citroën C3 Rally2, he doesn’t even appear to be part of the Rally1 conversation. At least publically.

As the old adage goes, you can make a fast driver more consistent but you can’t make a slower driver fast. That’s not to suggest Østberg or Mikkelsen aren’t rapid – far from it – but more to highlight that in such a tightly-contested battle, searing pace is the key attribute.

The battle between Lappi, Mikkelsen and Østberg as three ex-WRC drivers was always likely to be paramount in 2021, but it’s Lappi that’s emphatically shown devastating speed a touch more than his Norwegian counterparts have. That can often be enough to persuade a team to take a chance on you; just ask Kris Meeke who crashed twice on his audition rallies with Citroën in 2013 but earned a 2014 drive because his speed was unignorable.

If Mikkelsen does end up winning both WRC2 and ERC, he would deserve bucketloads of credit. But rallying isn’t always a results business – at least when on the periphery of the WRC.

The way to convince the manufacturer teams that he is worthy of a third shot in the WRC is to go out and blow his rivals into the weeds. Mikkelsen hasn’t done quite enough of that this year – particularly in the ERC – and has gone from being a surprise factor in the Rally2 field to a constant that’s grinding out solid but (probably quite unfairly) forgettable results.

Because of his résumé, podiums are the least people expect of Mikkelsen so he needs to do more to truly impress. A win – and a clear one at that – really wouldn’t go amiss on the Acropolis Rally this week and on the Azores Rally in the ERC the following weekend.