Here’s a thought for you, if Sébastien Ogier takes a ninth victory at next year’s Monte Carlo Rally, he’ll have won 10% of all the Montes ever run.

For those not entirely believing of my maths, another success would make it nine from 90. That’s one in 10, right?

I know statistics can be massaged for the benefit of the message, but a 10% win rate across a 111-year-old event would surely indicate the Gap man’s the best there’s ever been on the world’s most famous rally. Wouldn’t it?

As with all of these things, it’s incredibly difficult to compare generations. The cars are radically different, the route’s undergone enormous change and the level of competition varies from season to season.

How, for example, would Jean Trévoux have compared with Ogier. Trévoux won his first Monte in 1934 as a co-driver, but then switched seats to guide a 3.5-liter Hotchkiss cabriolet to match that feat from behind the wheel in 1939.

Admittedly, the French-built machine wasn’t much of a match for last week’s winning Toyota Yaris WRC – but Ogier and co-driver Julien Ingrassia didn’t drive their entry car from Athens on a concentration run either…

One record Trévoux did beat the defending champion to was to become the first driver to win three Monte Carlo Rallies in three different decades (as well as from both seats in the front of the car).

Colin Clark and I banged on about Ogier’s achievement in taking victory in the noughties, the teens, and the 20s. His countryman did the same in the 30s, 40s, and 50s, with winning drives in 1949 (the next event after 1939, having skipped a decade due to the Second World War) and 1951.

Moving along a couple of generations, and tipping the hat to the likes of Erik Carlsson and Björn Waldegård, we arrive into the early 70s to meet a man called Munari. Sandro Munari.

The Italian’s first victory came at the wheel of a Lancia Fulvia in 1972. There’s little doubt the 1600HF was outclassed by the more rapid Porsches, Alpine-Renaults and Datsun 240Zs around it, but Munari kept the car in the middle of the road and won by way of reliability and rally craft.

His second win was the start of a glorious hat-trick in a car which was definitely a match for anything else on the stages: Lancia’s Stratos HF. Through 1975 (below), ’76 and ’77 there was nothing and nobody to touch Munari. It’s worth nothing, his popularity with Lancia team principal Cesare Fiorio helped when it came to any decisions about which of the Ferrari-engined machines the Italian firm wanted first at the finish.

But still, Munari was the 70s Monte master. In a dominant car.

Anybody worried about handing out the Monte Carlo king tag to a driver winning with one manufacturer, have a think about Walter Röhrl.

The German won four from five Montes and each one of those was in a different make of car: Fiat, Opel, Lancia and Audi.

Röhrl’s innate natural ability allied to one of the most deep-thinking and capable rally brains made for a Monte-dominating combination.

Having won the 1980 event by 10 minutes in a Fiat 131 Abarth, he was forced to sit out the following year’s rally after Mercedes pulled out of the World Rally Championship at the last minute. In fact, Röhrl didn’t sit the event, he took on the rally’s most complicated job and ran as an ice note crew for Jochi Kleint.

Twelve months on and he was back armed with an Opel Ascona 400 to show up Audi’s all-wheel drive Quattro. There was another Quattro-eclipsing performance aboard a Lancia 037 in 1983. Those two-wheel drive wins were undoubtedly eased by the absence of winter. But when the snow came for 1984, it was the Bavarian who forgot everything he’d learned about driving rear-wheel drive for the previous 18 years, learned to brake with his left foot and showed everybody the way home from the left-hand seat of a factory A2.

Everybody remembers that Monte. And, had it not been for a catastrophic tire choice on the first run through the Col St Raphael stage on the penultimate day, Röhrl’s record would have read five from six. Instead. The German would regret fitting inters beneath his rally-leading Quattro Sport after just two of the stage’s 17 miles.

Rival Ari Vatanen had taken studs, allowing the Peugeot 205 T16 driver to power past him in the stage and on the leaderboard.

Röhrl is a genuine Ogier rival in terms of being the greatest driver ever on the Monte Carlo Rally. But Vatanen’s 1985 fightback win rivals any individual victory in the history of the sport. The Finn was leading by four minutes when co-driver Terry Harryman checked them into a Gap control early, handing a four-minute lead to Röhrl.

Instructing Harryman to tighten his belts and telephoning his wife Rita to ask her to fly from Finland to support him, he set about winning the rally all over again. And he did just that.

What about the next generation? Carlos Sainz is a driver whose approach to this most challenging of rallying conundrums mirrors that of Röhrl. Sainz simply wouldn’t stop testing until every single tire combination and every suspension set-up had been tested in every single condition.

After finishing second on only his second start on the Monte in 1990, the Spaniard topped the Monaco podium three times in seven years between 1991 and 1998. Between those wins, he was only off the podium once (dropping to 14th after crashing his Repsol-backed Lancia Delta HF Integrale late in the 1993 event) and finished second three times and third once.

That’s an impressive and sustained record on the Monte. Unfortunately for Sainz, it was almost immediately eclipsed by a record-breaking run from Tommi Mäkinen.

Between 1999 and 2002, Mäkinen went unbeaten to become the first driver to take four successive Monte victories.

A record like that makes it impossible not to count the Finn among the finest.

But it’s also worth remembering that Tommi’s 2002 win with Subaru is the one Sébastien Loeb counts as the half in his 79.5 World Rally Championship wins.

After spraying the champagne to celebrate what he believed to be his first ever WRC win, Loeb lost that maiden success after being handed a two-minute penalty for a contravention of tyre changing regulations. First became second for the then 27-year-old Citroën driver.

Loeb landed a hat-trick of wins and looked well set to continue that trend into 2006. In the first five stages, he built a 1m16s lead over Ford’s Marcus Grönholm when he slipped off the road on the Pierlas stage on Friday night. In a modern-day equivalent of Vatanen’s fightback, the Alsatian’s Kronos-run Xsara tore back through the field with a perfect second day and a further three stage wins on Sunday to narrow the gap to a minute to the Finn’s Ford.

“Maybe it’s a good time for this rally to finish now…” said a relieved-looking Grönholm at the finish.

There would be no mistakes from 2007, as he won four WRC-counting Montes on the bounce.

The event’s decision to duck out of the world championship – favouring instead the freedom to do what it wanted with its route under the Intercontinental Rally Challenge rules – opened the door for victories at the sport’s second level. In the intervening three years, Mikko Hirvonen (2010, Ford Fiesta S2000) and Bryan Bouffier (2011, Peugeot 207 S2000) could now count themselves as Monte winners.

But it was the man who won the 2009 event that really caught the eye.

On his first ever Monte Carlo Rally, then defending Junior World Rally Champion Ogier guest-drove Peugeot’s 207 S2000 to a comfortable debut win on the event.

It would take another five years before Ogier was back in the principality’s winners’ circle, but from then on the Gap star didn’t look back and was only beaten by an on-form and inspired Thierry Neuville in 2020.

It’s a very fair question to ask what Loeb’s Monte tally would have been had the Automobile Club de Monaco not departed the WRC for those three years – there’s little to indicate his domination wouldn’t have bridged that gap to take his own tally to 10 wins. We’ll never know.

What we do know is that Ogier’s win last weekend makes him the most successful driver in the history of the rally. A record he rightly revels in. But it’s also important for him that he’s also the man who’s won it the most with different manufacturers (Peugeot, Volkswagen, M-Sport Ford, Citroën and Toyota).

Ogier, the Monte master? The numbers support him and who are we to argue with the numbers. 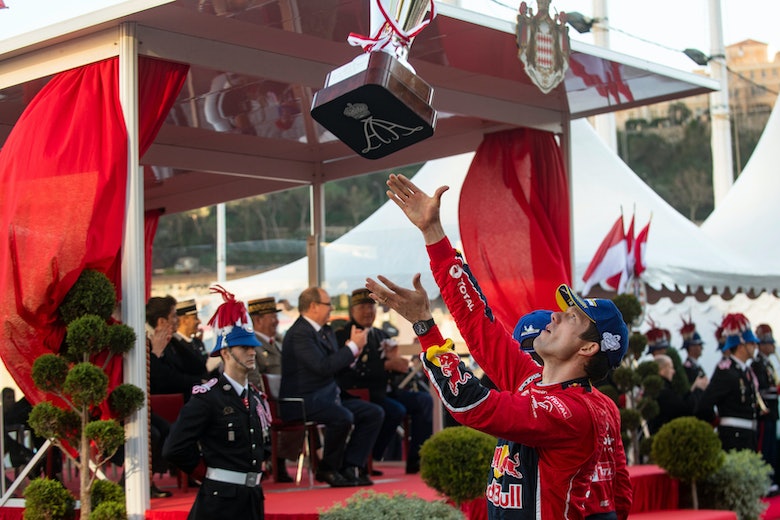 In 2014, Volkswagen Motorsport director Jost Capito was on the lookout for a present to celebrate Sébastien Ogier’s maiden World Rally Championship. Ayrton Senna and Ducati combined to provide the answer.

A Ducati 1199 Panigale S was duly delivered, to the Frenchman’s absolute delight.

It’s why his latest Monte Carlo Rally win means so much.

“For me,” Ogier told DirtFish, “Senna was always the one when I was young. He was my idol and the greatest motorsport hero ever.”

Having watched the Brazilian win on the streets of Monaco, the principality held a special place for Ogier. And now the two feature on the same page of the Automobile Club de Monaco’s record books, it’s even more special.

Ogier continued: “This place has always been unique for me for many, many reasons. He (Senna) still has the record here [for Formula 1 wins] and I join him a little bit with this record and that makes me proud.”

Ogier’s eighth victory was the latest and one of the greatest – a win carved in the style of his hero. Ogier’s Saturday morning run from La Bréole to Selonnet, the one where he took 17.8 seconds out of everybody, would stack up nicely against Senna’s 1988 Saturday shot from Boulevard Albert 1 to Boulevard Albert 1, the one where his MP4/4 was 1.427 seconds faster than anything else.

It was also a win which added another dimension to Ogier’s dream. His first Monte win came on his debut on the event 12 years ago. Number eight made him the most successful driver ever on the rally.

“I have exceptional emotion to win this rally,” said Ogier. “This is the rally that gave me the dream to be a driver one day. The rally I watched as a kid and back then I was dreaming just a one day have the chance to do it!

Collecting eight trophies from this rally is something I would never think of and I am very proud of.”

What’s better is that it still runs out of Gap backyard.

“I definitely I have a good feeling for this rally,” he added. “Probably being born in the Alps helps me to have this connection with the mountain, with this winter condition we have to face.

“This was definitely a hard one. A bit shorter than normal in terms of kilometres, but for the condition it’s one of the hardest I had to face. It was so difficult to read; the gravel crew was passing, sometimes, very different condition to what we had and the level of grip sometimes is incredibly low. To be in Monte Carlo at the finish is already an achievement, so whoever is here can be proud to be here.”

It’s that challenge and that emotion that means DirtFish is willing to wager we’ll definitely see Ogier back for round one in 2022.

The champ’s chat about a return was more defined on Sunday.

“There is a strong possibility,” he said, “that I start this rally again in the future.

The championship is not on my list anymore, but rallies like Monte Carlo can definitely still be.”

He’ll always be very welcome back between the mountains he’s made his own – and in the principality where he shares a record and a dream with his hero.

Junior WRC to begin in Croatia in 2021