It’s 7pm and the streets of Milan are quiet. Lombardy’s quiet. Italy’s quiet.

Coronavirus has brought the sound of silence to a place where life being lived is normally a noisy process. Noisy in the best sense of the word. Noisy with chatter, laughter, love, life. But not tonight. Not for a few nights.

Climbing into his ambulance, Mario Isola sits and briefly considers the Saturday night ahead of him. Briefly because the radio which sits in the cab smashes the silence and returns Pirelli’s head of F1 and car racing to the current, clear and very present danger which lies in wait.

Isola and his team are away into the night to collect the latest victim of a pandemic that has ravaged his beautiful city and continues to rampage through his country and around the world.

Ten hours and nine calls later, Isola’s back to base. The darkness stretches the shift out, this is early spring. Daybreak remains an hour or so away. The Piazza del Duomo, empty as it is these days, always looks better when sunrise picks out the shapes and shadows of the world’s fourth largest church every morning. For too long, there’s been fear and dread in every day in northern Italy.

But for Isola, every sunrise brings his people, his place and the wider world closer to the end of the shocking scenes through which we’re living.

Isola is the most good-humored, generous of chaps. I’ve known him for close to 20 years and I’ve never seen him without a smile. But not in his 32 years as a volunteer ambulance driver has that smile and sense of humor been tested as it is now.

“You know,” he says, “normally when you are ready to go out on the Saturday night, you have an idea of what’s coming and you think: ‘OK, I’m ready’. It can be a car accident or it can be somebody falling over or maybe some people in trouble when they are coming from the discotheque. But now, it’s changed a little bit. The roads? They’re quieter now. Not so much cars on the road and the people are all locked away, nobody is going out. So it’s a different Saturday night.

“Now we go out and we don’t know where this thing is coming. But we know it is. It is just so busy. A normal Saturday night is busy, but now every night is a Saturday night.” 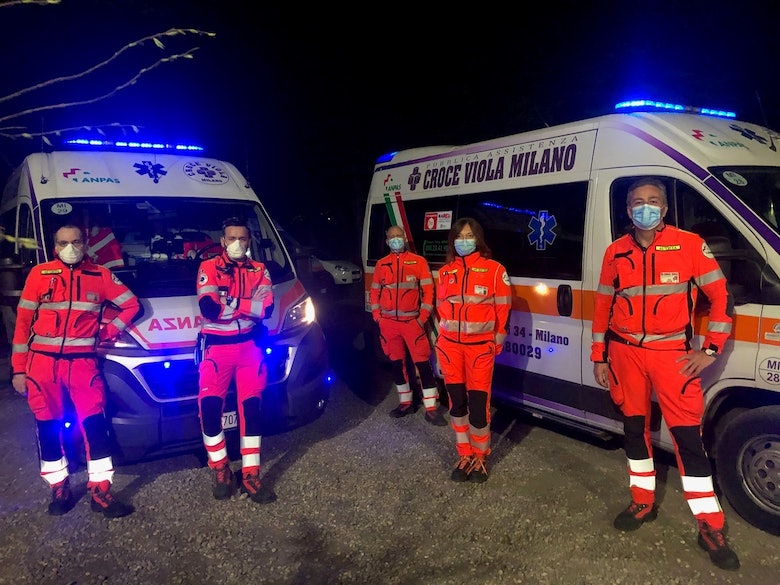 Rarely is there somebody so deserving of their success as Isola. He’s worked tirelessly for Pirelli and is entirely qualified to lead the Milanese firm’s assault on global motorsport. Given his seniority, isn’t there a consideration of this before putting himself in the firing line?

“David, hey, it’s fine. Didn’t you see? When we go out, we go out looking like ghostbusters.”

Isola’s voice dies away, a moment of pause as he considers the question more deeply.

“You know, I do this job to keep my feet on the ground. We live in this world of motorsport, of the World Rally Championship and Formula 1 and we have everything we need, everything is done and we are well looked after.

“Out here is real life and real tragedy is happening. When this thing happened, I wondered if we would see some of our volunteers stopping. This didn’t happen. We got more. We have a wall when we walk into our base, it’s a wall where people are writing messages. Honestly, the emotion is really high here.”

I’d called Isola to talk about Ott Tänak’s time as a Pirelli Star Driver, but then we found something much more important to talk about.

And I found myself talking to a real, proper, bona fide hero.

I put that to Mario. That he and his colleagues alongside him in the ambulance were finally getting the global recognition for what they do. For the heroes they are.

He laughed. Of course he laughed.

But it’s true. All too often these days we talk blithely about a ‘heroic’ effort through the El Chocolate stage or how Tänak’s world title has delivered him to true ‘hero-status’.

No it hasn’t. My friend Mario, he’s the real hero.