Heat. There’s a lot of it in a World Rally Championship Rally1 car cockpit at the moment, and although suggestions to resolve the issue have been put forward, Hyundai deputy team director Julien Moncet doesn’t believe there will be any major resolutions before Kenya.

Drivers have called for cockpit temperatures to be improved after they experienced excruciating heat in Portugal, and it was the same situation again last weekend in Italy.

Teams have been working on solutions and have put a variety of proposals to the FIA, several of which the governing body is considering, but there were no significant changes made in time for Sardinia, in which temperatures soared to well over 100 degrees fahrenheit in the car at times.

Dani Sordo and Toyota team principal Jari-Matti Latvala have both suggested Rally1 cars should be fitted with air conditioning, but Moncet believes that the fundamental cause needs to be resolved. 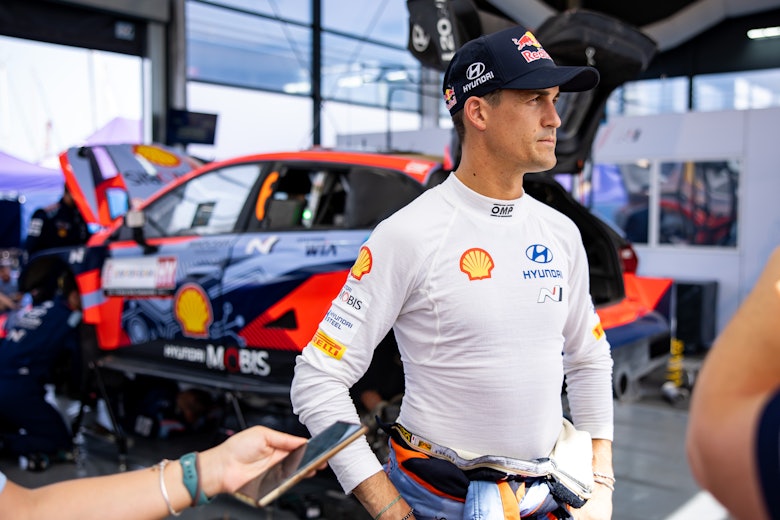 “We have all spotted the issue in Portugal, I think, right after the race all the teams put together because it’s a safety concern,” Moncet said to DirtFish on the eve of Rally Italy. “So we are pushing to find some solutions.

“We were immediately in touch with FIA, with some meetings already, I think Monday or Tuesday last week. So it has been very fast, and the FIA has a lot to do a few updates on the car. So it’s quite positive.

“We have seen different ideas. I think in between the manufacturers, we have the golden roof to avoid the sun, sunlight effect, we have tinted windows, we have some holes at the back for the airflow inside the car, we try to insulate as much as we can.

“But still, the main issue is due to the configuration of the Rally1 car itself with exhaust on the side with a narrow tunnel with the position of the tube very close to the cockpit.

“So I think what we did will improve, definitely. Will it be enough? I’m not sure, honestly. So some things that we’ll have to continue working on.”

Speaking more specifically about the air conditioning, Moncet added: “It’s one of the ideas. But obviously, the time between Portugal and Sardinia once again was not enough, because we have to see that the systems, it takes some space.

“You have seen that the cars are very tricky and now inside, so we don’t know where to put it.

“For sure there are as well some safety concerns because we have to fix them in a proper way so they do not fly into the cockpit in case of an accident or whatever, like the batteries, and so on.

“So we have different challenges to tackle before we can have this technology in the cars. But yeah, it’s one possibility.”

Regardless of whether the WRC adopts air conditioning to aid cooling or not, Moncet doesn’t believe that conditions will be any better for drivers on Safari Rally Kenya at the end of June.

He previously told DirtFish after Rally Portugal that he wasn’t sure if drivers would even be able to make it through some of the African stages due to the extreme heat.

“I think Safari, we are facing the same issue as we have between Portugal and Sardinia with the car,” Moncet affirmed.

“We’ll go back this week to Germany in our case and we have only a few days to rebuild them and send them to Kenya because it’s overseas.”