Kalle Rovanperä is just one stage away from a fifth World Rally Championship victory in six events, as Esapekka Lappi won a rain-soaked penultimate stage.

Gaps are large between all the nine remaining Rally1 crews, and with the powerstage up next nobody was totally inspired to push.

But Kanepi 2 became an increasingly wet stage, and that created some big gaps on the SS23 timesheet.

That meant that Lappi, who ran early on the road, faced a far drier and therefore quicker stage than those further up the leaderboard, and as a result he doubled up on his stage win on SS22.

His stage-winning margin was a handsome seven seconds over Oliver Solberg who had a bizarre moment of communication with his co-driver Elliott Edmondson as Solberg asked Edmondson, quite succinctly, “what the f*** are you doing?”

It turned out Edmondson was trying to cure a developing problem, but his multi-tasking had messed with the ignition button which briefly cut Solberg’s engine and disturbed his rhythm.

“The center console fell off and it hit the ignition button, and then Elliott was trying to put it back but the engine stopped and then got going again so it was a bit dangerous,” Solberg explained.

Takamoto Katsuta and Adrien Fourmaux were third and fourth fastest to hold fifth and sixth places overall, but Thierry Neuville was the first of the cars to really lose time. It’s fair to say he didn’t have a fun ride in his Hyundai.

“I have zero confidence. In this condition in the car it’s incredible,” he said. “We are driving like on eggs.”

Craig Breen drove at a sedate pace in order to protect his rubber for the powerstage, but such were the deteriorating conditions for the later runners, he was still quicker than the overall top three on SS23.

Elfyn Evans, who admitted he was “pretty relieved” to see the end of the stage, was quickest of the bunch but stopped the clocks some 37.1seconds slower than team-mate Lappi, beating Ott Tänak by 0.1s.

Rally leader Kalle Rovanperä was another 1.5s adrift, and was strangely the slowest of the Rally1 cars.

“The weather is not so enjoyable now, really difficult,” he said. “A lot of standing water and a scary feeling inside the car but we made it through.”

Only the powerstage remains on Rally Estonia, but rain has already been battering the stage and is expected to continue falling.

There was drama in WRC2 as Marco Bulacia went off the road and into a ditch on SS23, retiring from third place and 10th overall.

Toksport team-mate Andreas Mikkelsen is potentially under threat at the head of the class too, as Teemu Suninen eroded his 9.5 second lead.

“It’s really, really slippery so for sure if you take a huge risk you can gain a lot of time there,” said Mikkelsen.

“We tried to be clever and we tried to push, but we were a bit hesitant. In these conditions you cannot be confident.”

Suninen beat Mikkelsen by 6.3s to trim his deficit to just 3.2s with one more stage to go, setting up an epic grandstand finish.

“The game is on,” he said. “It’s quite tricky conditions so we really had the chance and tried to use it. Yeah, it’s interesting now.” 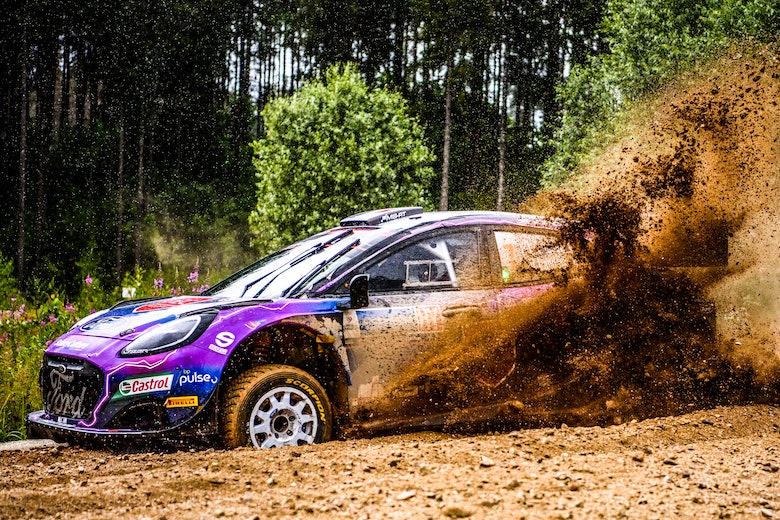