It’s been a frustrating season so far for Thierry Neuville. Two podiums to his name with the most recent one being on Rally Croatia and he’s yet to score a win.

It’s not how he would have hoped the season would be going eight rounds in.

But there is one thing that will give him comfort this week, he’s heading home as Ypres Rally Belgium is next on the World Rally Championship calendar to test the drivers.

In last year’s maiden rally on the Belgian roads, Neuville dominated, taking victory by 30 seconds over Craig Breen and winning seven of the 19 stages which were contested.

And once he took to the front on stage four, he never looked back, leading for the entirety of the rally from that point.

To put it simply, he was untouchable that weekend.

So as he heads to Belgium as the current victor of Ypres, should the rest of the field be worried?

Toyota technical director Tom Fowler said this will likely be the case as Neuville looked to have more cards up his sleeve on last year’s rally.

“I mean Thierry obviously knew all the tricks of Ypres last year,” he told DirtFish. “That was clear that he had a few tricks when we analyzed what he was up to during the race.”

But when pushed about what ‘tricks’ Neuville was able to pull off exactly, Fowler confessed the nature of the rally makes it difficult to master, something the Hyundai driver was able to figure out better than his rivals.

“I think one of the things is it looks very same-y as a rally, and it’s easy to be drawn into ‘ah every corner’s the same’, which it is from a TV point-of-view,” he said.

“But when you look into the detail technically, what you need to do stage by stage, there’s more to it than that actually.

“And Thierry knew that and of course told some of his team that.”

On the flipside to Fowler, Toyota team principal Jari-Matti Latvala said although Neuville may have a home advantage, he was quick to point out that his own team has a well-rounded set of drivers that can push for the win.

“Yeah, he’s going to be strong for sure, it’s his home event,” he said.

“But I think also this year we’ve seen Kalle [Rovanperä] how strong he has been on Tarmac, so I think Kalle can be very strong there and also Elfyn [Evans] and Esapekka [Lappi].

“OK Esapekka wasn’t there last year so it might affect him a bit for Esapekka the performance for sure because he has no knowledge.”

Latvala also expressed his confidence in this year’s GR Yaris Rally1 which is currently dominating the championship.

“But also now I would say last year our car wasn’t that good. So that’s why we are not so comfortable. Honestly, I’m not so fear[ful] because we already have experience of last year.”

One driver who is looking to get a win under his belt this season just like Neuville is Elfyn Evans. And the Toyota driver made it clear that he has no concern about the pace of the Hyundai going to Belgium. 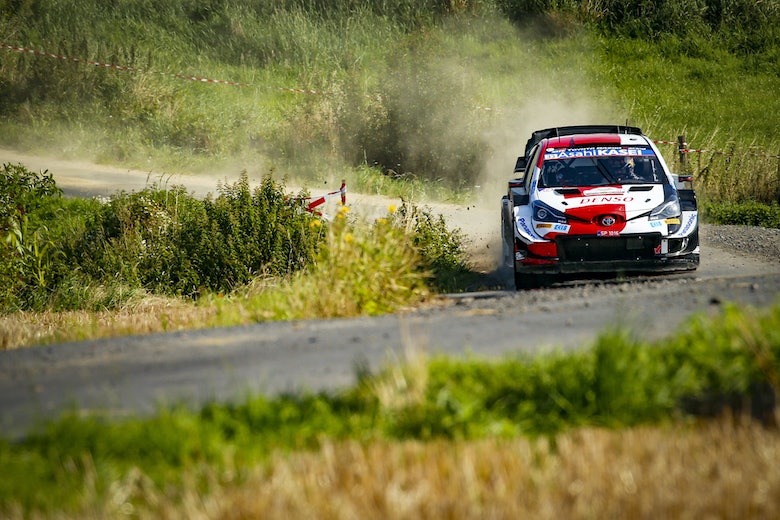 Why Toyota is better prepared for Ypres this year

Evans’ team-mate Kalle Rovanperä, who is dominating the championship and has his first (albeit slight) opportunity to take the title in Belgium, expressed his optimism heading to the rally but said he could find it difficult to outsmart Neuville if the weather plays a part.

“But I think then also it depends a bit on the conditions and weather. If it’s dry it can be a bit dusty like I think it was last year for some cars in the beginning.

What can we expect from Ypres this season?