Ott Tänak won the first gravel stage of the Acropolis Rally on Friday morning but Athens street stage winner Sébastien Ogier held onto his lead of the event.

SS2 Aghii Theodori was delayed by 15 minutes due to a road traffic incident that caused a delay on the transit section to the test.

Conditions – despite the dramatic rain and fog on the pre-event recce – were also bone dry, representing what could be considered a typical Acropolis Rally.

As the first driver onto the test, Ogier might have been expected to struggle as a result. He described the conditions as “extremely slippery” and admitted “I did everything I can but unfortunately I think it will be very costly in time”.

The World Rally Championship leader proved to be wrong, however, as he set the second-fastest time, a mere 0.2s adrift of stage winner Tänak’s, to maintain his rally lead. That now stands at 0.8s over the 2019 world champion.

Tänak, in his usual succinct manner, described his run as a “clean stage, no troubles, all fine”.

Elfyn Evans was third fastest to hold that same position overall. He was 1.1s down on Ogier on the stage to trail by 1.7s overall.

His and Dani Sordo’s stage-end comments, coupled with the leaderboard, suggested that the road cleaning effect wasn’t as severe as on usual gravel rallies.

“[It was] not so easy to follow Seb’s lines, they were pretty faint,” Evans remarked. 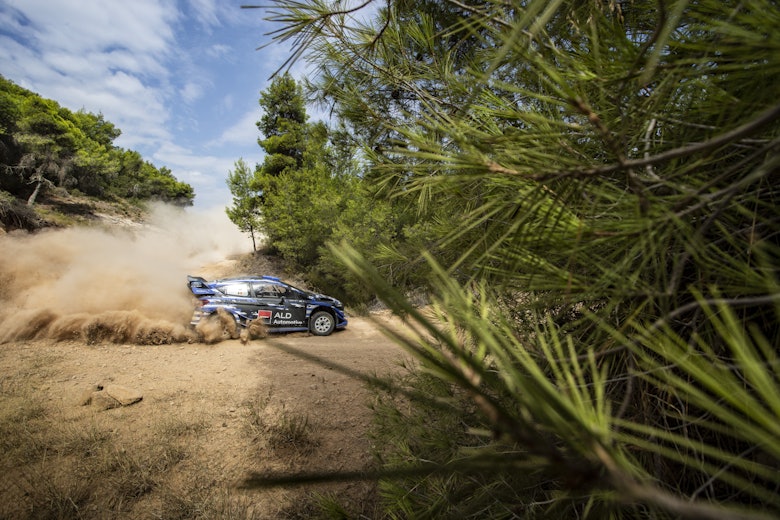 Sordo, who was fifth fastest behind Kalle Rovanperä, said: “It’s very slippery. It’s not cleaning that much, the stage.”

Rovanperä is 5.8s up on fifth-placed Sordo and just 3.1s adrift of the lead, but was not totally comfortable on SS2.

Thierry Neuville had an underwhelming run on SS2, leaking 10s to his team-mate Tänak. He ended the stage in sixth overall, 10.7s down on leader Ogier.

“I wasn’t very confident to be honest, and I was losing the rear quite a lot,” he said.

“I missed a bit of speed, I could feel it in the stage. We are carrying two spare wheels and it’s very twisty in there and low grip.”

M-Sport’s Adrien Fourmaux reached the end of SS2 without his rear bumper, but that didn’t seem to affect his performance too much. The 26-year-old did however admit he “was struggling a bit with the set-up”.

He was 2.4s quicker than Pierre-Louis Loubet, who had an encouraging start to his rally despite running quite wide on the final corner of the test. The 2C Hyundai driver described his performance as a “nice one”.

Gus Greensmith was less positive though. Aiming to win his first WRC stage this weekend, the M-Sport driver was the slowest factory driver, 17.1s off the pace.

WRC2 rivals Andreas Mikkelsen and Mads Østberg shared seventh overall and the class lead after the opening 0.6-mile blast around Athens on Thursday evening, but their eagerly anticipated battle has already been defused as Østberg lost over five minutes a mechanical issue on SS2.

Uniquely for a WRC round, Aghii Theodori is the only stage the crews will return to later on Friday. It will run as SS4, the third part of a five-stage leg.

The joy rallying an Escort Mk2 can deliver