Just 2.7 seconds split the leading pair ahead of the short 2.08-mile superspecial on the Lousada rallycross track, but Tänak pulled 3.3s from Evans in their head-to-head to take a six-second lead into Saturday.

But the 2019 world champion was more relieved than happy to have made it to the end of the day.

“It’s been a demanding day,” he said, “so much has been happening and [there were] so many issues so actually looking forward to having a bit of rest and starting again tomorrow.”

Dani Sordo could have ended Friday as rally leader but a disastrous SS7, where he stalled and struggled with fading tires, dropped him back to third.

The Hyundai driver and new co-driver Borja Rozada did not have a strong run on Lousada either, picking up a puncture on the road section towards the stage and then struggling with tread-less rubber on the superspecial.

It all means Sordo ended the day nine seconds adrift of the lead.

Takamoto Katsuta capped off what has been his most impressive day in the World Rally Championship in fourth overall, 15.4s shy of the lead.

Asked if it was his best day in the WRC, Katsuta said: “It is the best but the feeling is not the best, [it was a] really tough day. But OK I enjoyed a lot. 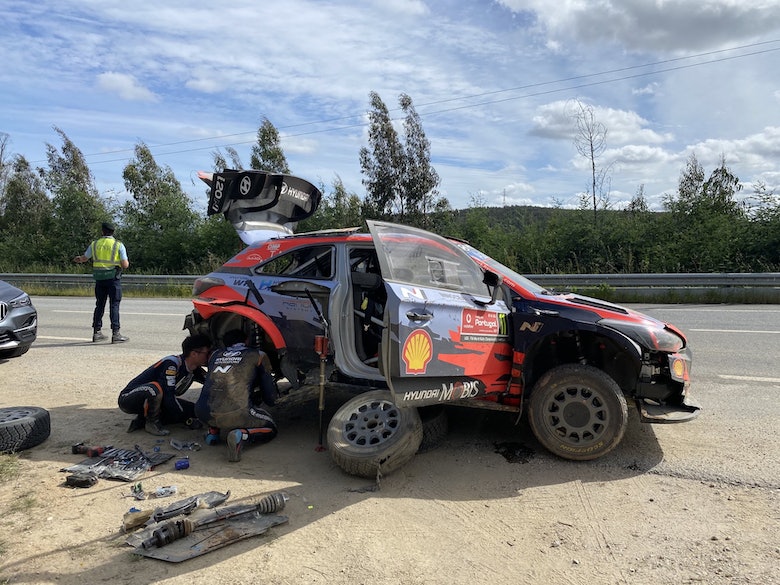 The crazy events of SS7 – after which Thierry Neuville (pictured above) retired – transformed Sébastien Ogier’s weekend as he headed into the final stage of the day fifth instead of a likely seventh, 2.3s ahead of his team-mate Kalle Rovanperä.

The two faced off against one another on Lousada and Ogier duly put more distance between himself and his 20-year-old colleague, beating Rovanperä by 2.6s to hold a 4.9s advantage heading into Saturday.

“It’s been a tough day for me so I’m happy it’s over for us opening the road,” said Ogier. “Let’s see what we can do tomorrow with a few cars in front of us.”

M-Sport’s two cars end Friday seventh and eighth; Gus Greensmith capping off a strong day that included four top-three stage times by beating his team-mate Adrien Fourmaux in their head-to-head on Lousada and setting the third-quickest time too.

Greensmith’s day was hampered by a puncture in the morning while Fourmaux picked one up himself, albeit caused by a mistake on SS7. The pair are separated by 31.2s in the standings.

The anticipated battle in WRC2 did not disappoint as Esapekka Lappi and Nikolay Gryazin faced off against each other in WRC2, racing each other on the superspecial too.

Lappi had his nose ahead by 1.1s going onto the test and edged his Movisport team-mate by that same margin to double his advantage to 2.2s overnight.

“It’s always nice to have a battle inside of the team and nice to have an audience, so nice to see people,” Lappi said in reference to the fans that made it to the Lousada stage.

The two Volkswagen Polo GTI R5s of Lappi and Gryazin are ninth and 10th overall in the standings as well as topping the WRC2 table. Teemu Suninen is close behind too, just 9.8s behind leader Lappi.

Oliver Solberg – who beat Suninen in their on-track dual – is fourth ahead of Marco Bulacia and a despondent Mads Østberg, who “wished I could enjoy” the driving after picking up a puncture and struggling for pace on Friday.

WRC3 championship leader Yohan Rossel again leads the category in his Citroën after the first day in Portugal, prospering when Spaniards Pepe López and Jan Solans – who respectively led early on – ran into trouble.

Rossel raced Kajetan Kajetanowicz on the Lousada superspeical and lost by 0.7s, but that defeat wasn’t enough to spoil his day as he ended it 3.5s out in front.

Chris Ingram is third in his Škoda, over 50s behind the leader but hopeful of winning some ground back from the event organizer after losing time passing the stricken Emil Lindholm – who had been just 1.5s shy of the lead – on SS5.

Jon Armstrong was leading the way in Junior WRC before a puncture on SS6 cost him a damaging four minutes.

That paved the way clear for Sami Pajari to assume the role of class leader; one he would not relinquish for the remainder of Friday. Martin Koči holds second ahead of Mārtiņš Sesks and Armstrong.

William Creighton was a surprise second early on on just his second WRC event abroad, but a driveshaft broke on his Ford Fiesta Rally4 and forced him out for the day.

Evans moved up to second place by notional time