It’s hard not to be impressed by several French drivers competing in this year’s World Rally Championship.

Sébastien Ogier has been back to his very, very best form at the head of the field and looks odds-on for yet another world title, while Adrien Fourmaux has proved a revelation, transferring his encouraging Rally2 performances of 2020 into the big league of World Rally Cars.

But actually, Yohan Rossel has put forward a very compelling case to be rated better than both of them, coming on leaps and bounds this year to lead WRC3 and look every bit the champion in-waiting.

“Trop gentil, merci!” he smiles, as DirtFish puts it to him that he’s been one of the most impressive WRC drivers of 2021. It’s the first time this writer has been called “too kind” in a while…

DirtFish is catching up with Rossel while he’s on a high. He joins us via video link sat in Valence Chabeuil Airport, fresh from getting married the weekend before and ready to fly out to the Barum Rally to compete in the Opel e-Rally Cup as a guest driver.

“This will be new for me to drive an electric car,” he quips.

But what’s no longer new to Rossel is winning rallies in a Citroën C3 Rally2. His profile outside of France has been boosted massively by his stellar WRC3 campaign to date, which includes three wins and two further podiums from five starts.

That’s no easy feat for any driver to achieve, but particularly in WRC3 given the strength and depth of the field.

Nobody should be surprised though. Rossel has more in common with Ogier and Fourmaux than DirtFish’s quick earlier comparison alone, as he’s a winner of the famed Rallye Jeunes program from the FFSA.

“My career started in karting at 10 years old I think, lasting five years, and after because I love cars the step for me was I started on the track with Caterhams and I won the championship,” Rossel explains.

“It was just a perfect car but for the evolution of your career it’s not possible because my budget was €7000 [$8296] for one year, just amazing in motorsport!” he says. “After that I won the selection of the French Federation [FFSA], Rallye Jeunes, the same as Sébastien Ogier and Adrien Fourmaux also, and in my first year in rallying I won the French junior championship.”

From there, Rossel became a regular in France, winning the national championship in 2019 before progressing into WRC3. But success wasn’t to come quickly, as Rossel so mildly puts it: “In 2020 it was so difficult because I didn’t have the experience to win, but this year I think it’s better.

While Rossel's 2020 WRC3 campaign started promisingly with fourth in Monte Carlo, the rest wasn't really anything to shout about. This season he's out to make amends

“But I think after two years, it’s possible. For a good driver, it’s possible and if during your second year you can’t compete with these guys after two years of experience where you have the same preparation as the other guys, you don’t really have any excuses not to be up at the same level.”

Rossel’s not wrong – but that doesn’t make the fact he’s achieving the results that he is any less commendable or impressive. And, crucially, the 26-year-old is backing up his own statement; producing an extremely encouraging trajectory of form that proves his theory to be correct.

While Rossel’s WRC3 campaign last year started promisingly with a fourth on the Monte Carlo Rally, a collection of ninth-, 10th- and 11th-place finishes on the remaining rallies wasn’t really anything to shout about.

This season, he’s set about making amends. Winning the Monte, there was a blunder in Croatia where he got crossed up on the second day, hit a bank and rolled his Citroën C3 Rally2, but third was a strong salvage job.

In Portugal, Rossel was narrowly edged by Kajetan Kajetanowicz – just 5.6 seconds split them at the end of the rally – but victory on Rally Italy and then last time out on the Ypres Rally have proved Rossel’s early-season form was no flash in the pan.

“I think my best performance is Ypres,” he says, “because I didn’t know the roads and the local guys are very fast and know very well the stages.

“But I think Sardinia was also a good result because after Portugal, my team worked very well on the car because the set-up was not perfect in Portugal, we had a lot of problems, not with tires but [the Pirellis are] so different to Michelin and you need to work on the car [to adjust it to the new compound].

“And after Portugal during one week I think we worked 24 hours [one day] and after in Sardinia the performance was very good. But yes, I think Sardinia but also in Croatia because I did a mistake, a little mistake, but I competed with the top drivers in Rally2 and I am happy to perform.” 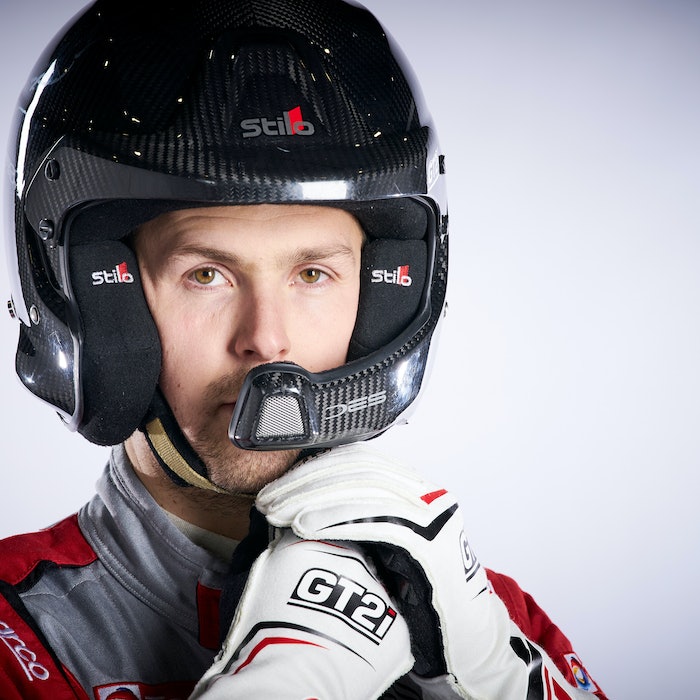 Winning Rally2 overall is the target for the second part of the season. I did it in Ypres, it was good, but I also hope to win a rally on gravel this year Yohan Rossel

Croatia was Rossel’s first rally with a new co-driver, Alexandre Coria, as his partner since 2014 – Benoît Fulcrand – decided to step away by mutual consent.

Entertainingly, Rossel pivots his phone to show DirtFish Coria waiting with him at the airport – “do you want to say hello to my new co-driver?” – before explaining why the change was made.

“After Monte I had a meeting with the [French] Federation and Citroën,” Rossel says. “I am motivated but in the rally car there are two of us in the car and if you don’t have the same motivation I think it’s impossible to perform.

“It felt like a good time to make a change because Benoît also wanted to focus more on his personal professional life, so it was a mutual thing for him to go his own way and me to find a new co-driver in Alexandre.”

Clearly it’s a partnership that’s worked wonders after four rallies, but curiously, despite his healthy WRC3 lead, Rossel’s ambition isn’t just to seal that championship but also to prove his pace against all of the other Rally2 runners in WRC2.

Rossel has managed that once this year – in Ypres – but wants to try and match the established world stars on the upcoming Acropolis Rally Greece and beyond, even if he accepts “it’s so difficult for a young driver to go and have the same result as them”.

“Winning Rally2 overall is the target for the second part of the season, and I won in Ypres, it’s good, but I hope to win also a rally on gravel this year,” Rossel affirms.

And why shouldn’t he aim for that? One day he will hope to be competing against the very best at the very top of the World Rally Championship, and after all he is competing in identical machinery to some big talents this year.

Rossel thinks the nature of the Acropolis and the fact it’s a new rally for most of the competitors opens the door for him to try and emerge ahead of likely pacesetters Østberg and Mikkelsen.

“It’s a new rally and for me when I finish the stage I look at their times,” he admits. “Yes, I think if I beat these guys it’s just perfect for our evolution and for a new rally it’s a little bit more easy for a young driver.”

However, Rossel’s eyes will remain on the WRC3 fight as main rival Kajetanowicz will be in Greece, and that gives him the opportunity to strip points away from his foe.

In WRC3, drivers are allowed to compete on seven events and carry forward their best five scores for their final championship total. Rossel has a handsome three wins, a second and a third – with the potential to win two more rallies and record a maximum possible score – while Kajetanowicz has two firsts, a second and an eighth.

Rossel isn’t threatened though, even if his current 45-point lead is a slight misrepresentation of the true championship picture, and says if he is just behind his rival on the Acropolis it will be “just perfect”.

It’s likely that Rossel’s final appearance of the season will be in Spain, which he describes as the “best solution” compared to Finland or Japan.

“It’s just next to my home, I think 300km [186 miles],” he reasons, “but for the points I think it’s so difficult because the Spanish guys are the same as the Belgian guys [in Ypres], they know the road very well, but we will see.”

Whatever happens from here on in, 2021 will now undoubtedly be chalked up as a successful season for Rossel.

Based on previous WRC form, nobody truly expected him to be this competitive – not even Rossel who, when asked if he was surprised to have done so well and if he had targeted this many wins before the season, replies: “Yes and no!”

Rossel’s future looks to be in the WRC. It certainly deserves to be. Winning a world title of course isn’t a bad way of going about cementing that point.

“But honestly I am concentrated on Greece and Spain and after that, we will see. But I want to continue in the world championship.”

Video: How Pirelli assesses its return to WRC so far