Six points. Four drivers. One championship title on the line. Next weekend’s Junior WRC3 showdown between Sami Pajari, Jon Armstrong, Robert Virves and Lauri Joona is one you do not want to miss.

After a variety of different contests in Sweden, Croatia, Portugal and Estonia, it all comes down to Acropolis Rally Greece. On such a rough rally, there’s bound to be a sting in the tail.

Heading into the decider, it’s last year’s Junior WRC champion Pajari that leads the way, but he shares that championship lead with Armstrong while Virves is just one point adrift and Joona another five.

Each driver must drop their weakest rally result from their final points tally, and Greece is delivering double points for the finishers as well as the usual reward of a point for every stage won.

All four contenders have a very realistic shot, not only a mathematical one, at becoming the first Junior world rally champion in a four-wheel-drive car, and scooping a four-round WRC2 program in a Ford Fiesta Rally2 next year with it.

And need we remind you of the bloodline? Sébastien Loeb and Sébastien Ogier are JWRC champions, as are Dani Sordo, Craig Breen and Elfyn Evans. Succeed here and you’re well on your way to a successful WRC career.

As ever, JWRC’s manager Maciej Woda has been impressed with what he’s seen this year – describing the four-way showdown as an “extreme situation” after some “absolutely amazing” battles on the stages.

“For sure this year we have an extreme situation where we have four guys within six points,” Woda told DirtFish.

“Obviously we haven’t got a massive number of competitors this year, I think there are a few reasons behind it, but we have an extremely competitive season.

“If you think about it, 85 points for Sami, 85 points Jon Armstrong, 84 points Robert Virves, 79 points Lauri Joona – four of them coming to Greece with not mathematical but real chances of winning the championship, and the battles that are going on in the stages so far have been absolutely amazing.”

And it’ll be a fair scrap too. All four are competing in identical Ford Fiesta Rally3s built and looked after by M-Sport Poland. But more than that, every single engine has been on the dyno to ensure there is no performance disparity between the cars.

“I know the commitment and effort that all the drivers are putting in,” explains Woda, “and I want to match it.”

Let’s learn more about the contenders and what they need to do to win:

It’s unusual for the winner of the JWRC (which has been a Europe-based series since 2010) to come back the following year and attempt to defend their crown, but the off-season between 2021 and ’22 was equally unusual as JWRC split into two series and the front-wheel-drive Fiesta Rally4 was swapped for the four-wheel-drive Fiesta Rally3 in what is now JWRC3.

Either way, Pajari’s decision to return has so far been vindicated as he leads the championship and has a marginal advantage heading into next week’s finale.

It was a complicated start to the season for the 20-year-old, who suffered a fuel pump issue in Sweden and then crashed from the lead in Croatia. But he responded with aplomb, winning in both Portugal and Estonia to soar to the top of the table.

Nothing is guaranteed in rallying, particularly on a rally like the Acropolis, but Pajari can at least head there knowing he has more in the bank to fall back on than the others.

He was pipped to the prize by Pajari last year, and now Armstrong is fighting him again to be champion.

Armstrong’s 2022 campaign has perhaps been less convincing than last season, despite it starting brilliantly with an epic and closely-fought win in Sweden. But whereas last year Armstrong kicked on from an opening round victory, this year’s he’s somewhat plateaued with two fourth place finishes and then third in Estonia.

Mechanical drama has intervened at times (but not before he’d already made a driving mistake) so all-in-all, the season hasn’t quite matched the talent Armstrong clearly has.

At 27 years old and with a continually difficult situation with budget, Armstrong feels this is his last chance saloon. You can bet the house that he’ll be doing absolutely everything he can to win next week.

Devastatingly fast and with a really strong tactical head upon his shoulders, Armstrong is a real favorite along with Pajari.

Crashing on stage two of Rally Sweden was far from the best way to begin a season, but from there on Robert Virves has been spectacular.

Points for second were still scooped and Virves hasn’t been off the podium since. Third in Portugal was followed by a stunning drive in Estonia where Virves broke Ogier’s record for the most stages won on a round of the JWRC. 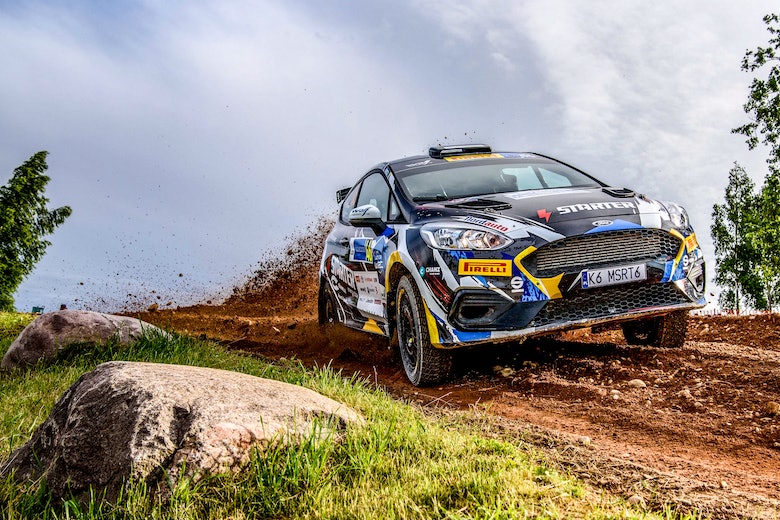 Virves was tucked in behind Pajari before dropping over a minute when he bent his suspension at the end of day one, 1m34.5s adrift. But winning all but one of the remaining stages, he fought back to finish just 14.9s behind. Incredible.

Translate that form into Greece and nobody would stand a chance.

Although all four drivers stand a real chance of grabbing the title, Joona has to be considered the outsider. Handed a big chance in Croatia to win, Joona still took it but his pace hasn’t quite been on the same level as the others.

While Pajari and Virves have both won 25 stages this season (and therefore scored an additional 25 points) and Armstrong has secured 21, Joona has only mustered up six stage wins.

However, the 25-year-old was rapid in Sweden, missing out on the win by just 2.7s, and has been comfortably the most consistent performer of the season. That could really pay dividends with as many as 66 points on offer in Greece (50 for the rally win, 16 from stage wins) where consistency is bound to be key.

It’s amazing that after four rounds of competitive action, things are so finely balanced heading into the final round. Each driver has amassed their points differently to each earn their chance to secure the biggest prize fund in rallying.

But what has the boss, Woda, made of it all?

“It’s quite amazing how completely different characters they are as well,” he says.

“You mentioned Sami having a difficult start to the year yes, but in all fairness to Sami – and I have to say this – it was the car that failed and let him down in Sweden. OK, Jon was on an unbelievable pace in Sweden, but I can imagine that if Sami didn’t have the fuel pump issue at the start of the rally that Jon would have a much harder life because Sami would be much more motivated to push and so on.

“But, I said it in Sweden and it almost sounds like I shouldn’t be saying it but, in Portugal last year it was Jon who was affected by the mechanical failure and it was Jon’s championship that was kind of affected by the car.

“This year it’s Sami who’s landed in this position, so this fight between Sami and Jon is probably something that everybody’s watching in JWRC last year and this year. But then you’ve got Robert who is from one side very quiet and shy, from the other he’s a very funny and chatty guy when he’s in the right mood and the right company, and he’s got incredible pace.

“I don’t like the phrase bad luck as I don’t believe really in things like bad luck, but maybe he still makes some mistakes, maybe lacking the same level of preparation as Sami and Jon, but what he’s done in Estonia was absolutely unbelievable. He was winning stage after stage and nobody could actually get close to him.

“So he’s got the raw speed, he’s definitely a raw talent. Then you’ve got Lauri Joona who’s very quiet, he’s maybe not taking as much risk as for example Robert will take, but he’s very efficient. So every one of them is different.”

But who’s the favorite? It’s tempting to believe it’s realistically a one-on-one between Pajari and Armstrong given they were in this scenario last year, but is that really the case?

“I would think that yes, probably in the end it will be between Sami and Jon, but Robert and Lauri can be really a surprise of the rally in Acropolis,” Woda argues.

“Lauri was very reluctant to take a risk last year and push for the stage points, he’s more open to it now and he’s actually talking about it, but also Lauri has got a very mature approach.

“Obviously in Greece, like it was in Turkey a few years ago, you need to be very smart because there are proper stage points to be scored but there is also 50 points for the overall win to be scored.

“It’s a rough rally; you can damage the car, you can not finish the rally, so you really need to weigh up what’s more important for you, whether it’s stage points or whether it’s overall classification points.

“I think it’s really Jon and Robert who are under the most pressure I would say, that’s my feeling to be honest, because like I said Sami has dropped his worst score already so he doesn’t really need to push that hard for stage points. He can focus on winning the rally and I can imagine he will do that.

“I can imagine Lauri will try and win the rally, and I can imagine that Jon and Robert will start to push for the stage points and one of them can make a mistake.”

Interesting stuff. But how would Woda approach it if he wound back the years and was behind the wheel himself?

“I think what I would do, and probably it’s what the guys are doing, is I would really, really watch a lot of the recce footage and pick the stages where I would go for a push for the stage points.

“Because that’s what you need to do on a rally like that, you need to spot the stage where you think ‘OK, it’s not a very long stage, it’s not maybe very rough, let’s go for stage points there but on the next one which is longer and which is rougher, I focus on getting to the end with a decent pace.’

“So this way really you can kind of plan to secure a good overall result with some stage points. And obviously every driver, like Sami should have a different approach to Jon and Robert because Sami doesn’t have to push as much as the others for the stage points.”

It’s really impossible to call, isn’t it? These are all tired old clichés, but each contender deserves it, and there can be no prizes for second.

“I have really enjoyed working with the lineup that we’ve got this year. It has been so far a big pleasure for me, personally and honestly it’s been a really big pleasure to work with those guys,” Woda concludes.

“I think we have a very good relationship with all of them. Whoever wins it will be happy news and it will be sad news because on the one side I will be happy for the one that won because everybody deserves it, but I will feel bad for the others because they are really, really good, fast drivers.”

The only thing that is for sure is whether it’s Pajari, Armstrong, Virves or Joona, they will have certainly earned their new title of Junior World Rally champion.