It’s not so often that you read things that are wrong on DirtFish. But on Thursday there was something wrong.

I decided to put it right by writing it myself!

But the reality is even better. We could be doing eight events in 11 weeks. For a while, that even looked like it could be nine from 11.

Paul and I are here in Portugal this week, driving the Team MRF Hyundai i20 R5 on the Rally Fafe Montelongo. Fafe’s a fantastic place with a real rallying heritage – so this is a good place to start what’s going to be one of the busiest periods of my whole career.

After that it’s straight to Aarova Rally Oudenaarde in Belgium. I’m really excited about that – it’ll be the first time I’ve driven the i20 Coupe WRC on asphalt. I did a day of driving in the marketing car in Germany last year, but that was quite an old specification car. Next weekend I’ll be in the test car, with all the bells and whistles, it’s going to be some car to drive.

Much as I love driving on the gravel – and I really enjoyed Estonia, that was an absolute buzz to be second to Ott [Tänak] there – but getting these current world cars on the Tarmac really is something else. The speed, the grip, everything is on another level. 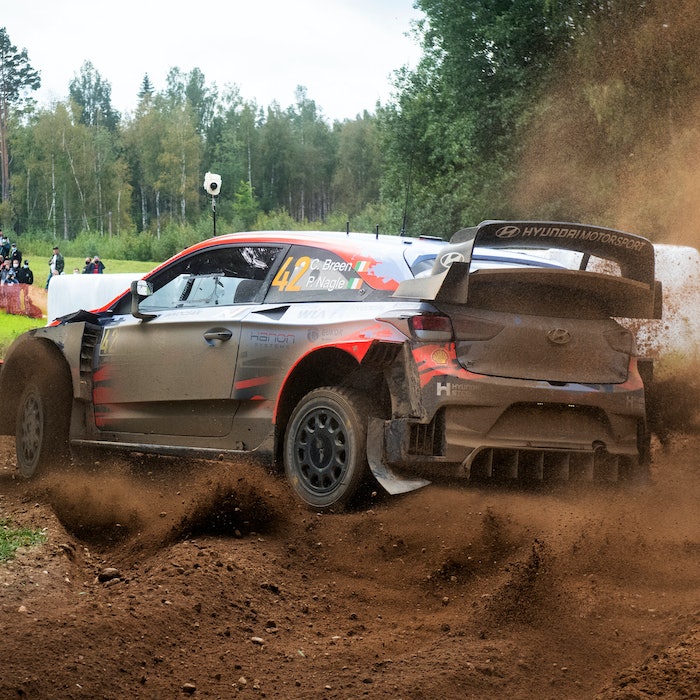 BREEN WANTED ESTONIA TO PUT HIM IN “SHOP WINDOW”

Weekend on we’re in Antibes with MRF, again a great, great rally before South Belgium and a second day of competition in the i20 Coupe WRC.

That takes us to Halloween and the start of November for a weekend off. Rally Hungary follows before another weekend off, then Ypres, Canaries a weekend off and finally Spa Rally to conclude our season on December 13.

Some people say you’ve to be careful what you wish for. Not me. This is almost everything I wished for (seen as you’re asking, the ultimate busy programme would be the full World Rally Championship with Hyundai Motorsport with maybe an Irish Tarmac Championship campaign in a Metro 6R4 on the side…).

Think back to those long days in lockdown, the days when I spent hours doing press-ups, running for miles, racing the simulator, walking the dog and drinking tea and I was dreaming about a run-in to Christmas like this.

I was actually pretty fortunate in that I started testing with MRF pretty quickly out of lockdown and it hasn’t really stopped since then. Certainly, the travelling and the amount of coronavirus testing I’ve been doing has been pretty crazy. The logistical side is a little bit complicated; we’re doing some events with the BRC team, obviously some with Hyundai Motorsport and some with other teams, so you’re kind of coming into a rally with one co-ordinator and leaving with another. It just means I’ve to keep one eye on Skyscanner for a bit of the time!

But the big one absolutely has to be Ypres. I can’t wait for that. There’s no doubt it’s going to be a real challenge at that time of the year, but it’s a very special place and very special rally.