For Europeans – especially the ones from the chillier parts to the north – the sense of occasion is enormous. A day, possibly a day and a half has passed and you’ve time-travelled another half a day forwards to get to this point.

What’s the time? No idea. What day is it? It might be Tuesday. But it could still be Sunday. The fuzzy-headed fog of longhaul leaves you somewhat befuddled.

Until you step foot outside the airport and the clean – albeit with a slight tinge of aviation fuel – air of New Zealand’s North Island smacks you between the eyes.

I’m fortunate enough to have traveled to this part of the world a few times, but the sense of relief at standing up (after a day sitting down) allied to the achievement and adventure of making it to the planet’s far side outweighs any question of what time or what day it is.

Welcome to an island in the South Pacific. Over there? Australia. Go in the other direction and up a bit and you’ll come to the best Rally School in the world.

It’s been too long since the World Rally Championship landed in these parts, but it’s very good to be back. And there’s no doubt we’re in the right place. The fella standing waiting in the arrivals area of Auckland International Airport wearing a pair of rugby shorts and a wooly jumper comes as confirmation. As does the frenetic energy from Coast FM’s breakfast show.

Worst thing you can do in the middle of the afternoon? Remember it’s three o’clock in the morning at home. Instant fatigue

Hire car formalities completed, it’s time for a shower and a cup of coffee before we’re away to remind ourselves what makes New Zealand special.

Our recce starts south on the stages around Raglan. Great swathes of New Zealand are wonderfully hip, but Raglan takes laidback cool to the next level. This one street town is the beating heart of Kiwi surf culture. You can’t move for smashed avocados and Sex Wax.

JC, Derek and Stuey own and run the Raglan Surf Emporium and between sets they’re rally fans.

“Ten years since it was here last,” said Derek. “Are they using Whaanga Road? They are… I know every corner of that road. I used to have a [Talbot] Avenger with a two-liter engine on twin carbs. I thought I was a rally driver.

“That road though, it’s gnarly.”

Gnarly’s not wrong. You forget just how twisty Whaanga Coast is, in places it’s like Motu by the sea. Whizz around the harbor and you’ll find Te Akau South and North, they’re much faster roads heading inland before passing – apparently – through Hobbiton.

Around every corner there’s another breathtakingly beautiful view and a genuine expectation that the next pic Gandalf or Bilbo Baggins on their way for a swift half in The Green Dragon.

So perfect is the panorama that you almost feel guilty blinking. But as the day wears on, shutting eyes becomes increasingly attractive.

Worst thing you can do in the middle of the afternoon? Remember it’s three o’clock in the morning at home. Instant fatigue.

Typically, the imaginative Kiwis have come up with a way of overcoming the worst of jet lag.

They direct you towards the lift to the top of the 328-meter Sky Tower – the iconic building which dominates the Auckland skyline. Then they’ll have one of the locals attach you to a piece of elastic. And then you jump off and go route one to the floor.

It works. It definitely works.

Awake again, there’s time for some more stages. So much is made of these roads – even Jari-Matti Latvala admitted they’re more driver-friendly than his own beloved Finnish stages. He’s right.

Now, I know the world is banging on a bit about the positive push from that corner camber angle, but you have to see it and drive it to experience it. Even at road speed, cresting and dipping from corner to corner is an absolute joy. Yes, other parts of the world can find a mile or two of this kind of thing, but here it just goes on, and on, and on. 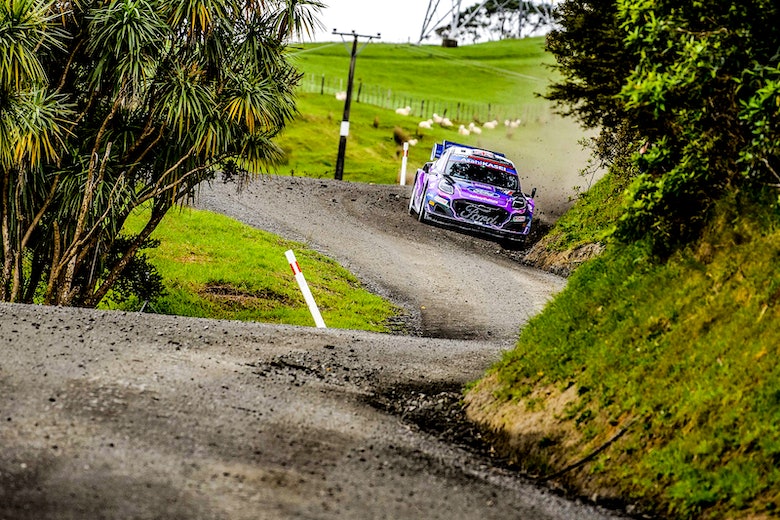 And even if it does go wrong, even if you do overcook it, crest the crown and find the positive turning negative and spitting you into the trees… what lovely trees to be among. The rolling hills, verdant volcanoes and rainforest-spec vegetation leave you in no doubt where you are.

It’s been too long. The wait is over.

Latvala wants Rovanperä to focus on Tänak, not winning