After an epic 2020 World Rally Championship season-opener in Monte Carlo, we’ve picked out the biggest talking points – and there were plenty to choose from…

This was Evans’ best drive yet

OK, Rally GB 2017 was very special – a Welshman dominating in Wales on the day his team finally won the titles it had been desperate for.

But you would expect that Welshman to be quick in Wales, and his team’s tyre supplier DMACK had thrown everything at making sure the rubber was perfect for that particular rally.

Did anyone expect that Welshman to come to Monte Carlo and lead for half the rally on his debut for a new employer? Did anyone expect Sebastien Ogier – unbeaten on this rally for six years up to 2020 – to be the second-best Toyota for so much of the weekend, and for it to take until the final stage for him to overcome his team-mate?

Evans was understandably disappointed at the finish on Sunday. He’d led into the final leg and ended up third, of course it stung.

But he should look back on this weekend and realise it was the rally of his life so far.

It’s not just Hyundai that has two elite drivers at the head of its 2020 line-up.

Neuville has the grit for a title bid now

Three defeats in the three years that Hyundai has been a legitimate title contender has left Thierry Neuville looking a little flakey in the eyes of many.

Given how he started 2020, that’s an impression he’s out to banish.

The most impressive aspect of Neuville’s Monte Carlo win was that he had to repeatedly come from behind to achieve it.

SS2 seemed at the time like one of the drives of his life. On the toughest stage of the rally, he shrugged off the ice patches and the darkness to utterly destroy all rivals and emerge with a 19s lead.

That lead soon vanished in this gloriously topsy-turvy contest. But the fact Neuville twice – on both Friday and Saturday – came back from situations where the Toyotas seemed to have him on the ropes and be pulling away was a huge testament to his grit.

On Saturday in particular, when he found himself 16s off the lead, you half-expected Neuville to suggest he’d settle for third and some safe points for the championship.

While he had gripes about both his ice notes and his car’s behaviour at different junctures, neither stopped Neuville from charging back.

Admittedly he had the advantage of being the only top driver with team/car continuity from 2019. At one point he finished a stage suggesting his Hyundai’s sheer length made it awkward for that particular piece of road. It was hard not to think he was probably the only frontrunner familiar enough with his 2020 car to make that sort of judgement.

But this was not a triumph of car familiarity. This was a triumph of determination and sheer speed, and one that bodes very well for Neuville’s title chances.

WRC stars are only ever centimeters from disaster

What a relief that Ott Tänak and Martin Järveoja escaped their horrifying Friday crash unhurt. It was another enormous tribute to modern WRC safety standards.

The ample spectator footage of the accident showed that what ended up as Tänak’s Hyundai ploughing off the road at high speed, launching into the air, felling a tree and plunging down a rock face had begun as the car just getting a little unsettled over bumps, going off the ideal line and exiting a corner slightly wide.

It underlined that the leading WRC crews are always so close to the limit that it only takes a few centimeters of errant positioning to end up in major strife.

The crash means Tänak is on zero points and already 30 behind Hyundai team-mate Neuville.

Given that Tänak always has the potential to unleash a run of crushing wins when fully comfortable, that points deficit isn’t a huge drama yet.

But the reigning champion started the weekend admitting he still had a lot to learn about his Hyundai.

In that context, the loss of 11-and-a-bit stages of getting more familiar with the car is potentially more costly than the early 30-point deficit. 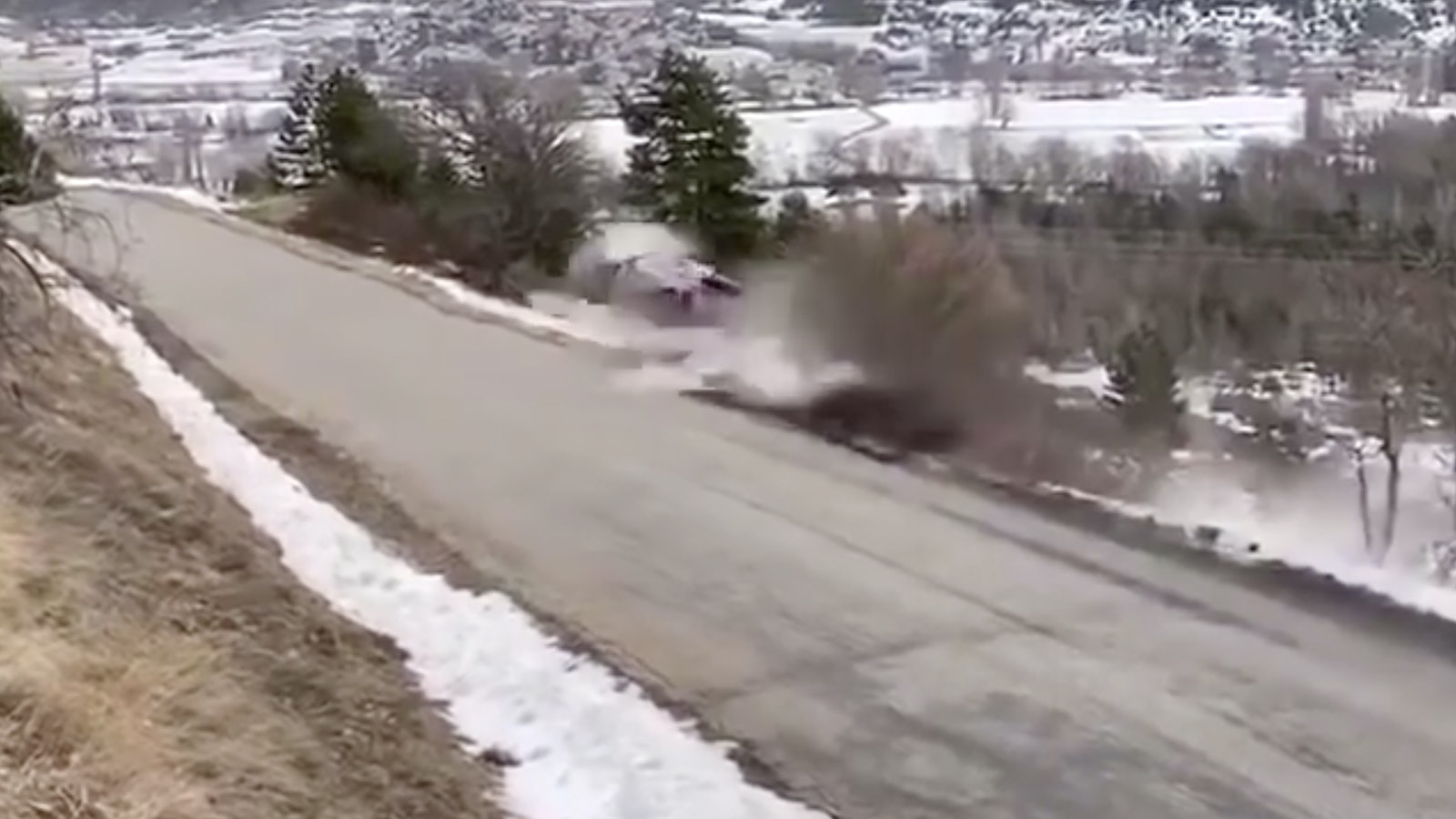 Melting ice was this year’s wildcard

So many Monte Carlo Rallies have twisted on unexpected stretches of ice and snow costing drivers time or rewarding/punishing tire gambles.

This year it was a surprise lack of ice that led to some of the biggest performance swings.

Drivers were left bemoaning their gravel notes on Friday morning in particular when it turned out that in the unseasonably warm temperatures many stretches of ice had melted before they got there.

This was a bit harsh on the gravel crews – asking them to accurately predict how much the rising sun/temperature might melt ice in the hours between their pass through and the actual stage is perhaps a bit demanding.

But while some were left kicking themselves for slowing too much for roads that turned out to be ice-free, Evans’ ability to quickly assess what was going on with the sun and judge where it was safe to push on after all was a big factor in his pace.

Sébastien Ogier was known to be keen to have Evans with him at Toyota as they had worked well together at M-Sport.

The six-time champion is too much of a professional and a sportsman to be regretting that choice after Evans came within 1.7s of beating him on a rally he’d won for six straight years, but it’s surely fair to say that Evans’ Monte performance will cause Ogier to revisit his expectations of the year ahead.

As a six-time champion paired with a one-time WRC rally winner, Ogier was clearly going to be seen as Toyota’s lead title contender this year.

Instead, on the evidence of the Monte, Evans will be as much of an in-house headache for him this year as Neuville and Tänak will be for each other at Toyota.

Bar his time alongside Sébastien Loeb at Citroën early in his career and the period at M-Sport in late 2017 when Tänak was beginning to really blossom, Ogier’s generally been top dog in his teams so this could be uncharted territory.

This was not classic Loeb

We’re not going to risk saying anything sacriligeous here. But this was not the finest hour of nine-time champion and seven-time Monte winner Loeb’s career.

A distant fourth would’ve been relatively disappointing, even before the spin and tire wear drama that led to him plunging to sixth on Sunday morning.

Normally when Loeb’s popped in for his star cameos in recent years, the headlines have been about how amazing it is that he’s so competitive given he’s well into his 40s and retired as a championship regular as long ago as 2012.

At some point, time is surely going to catch up with him. A part-timer, even with Loeb’s record, who is now 26 years older than one of his rivals – Kalle Rovanperä, who beat him to fifth – and who has not contested the series full-time in nearly a decade won’t always be able to be a frontrunner on every appearance.

But seeing him struggling on Sunday was still heartbreaking.

A great ‘save’ from M-Sport

When M-Sport’s rally began with all three cars limping through SS1 because leaves were causing them to overheat, and then Teemu Suninen’s Ford had a transmission failure, and then Gus Greensmith lobbed himself backwards down a bank in embarrassing fashion, it seemed like this might be a humiliating start to 2020 for the team.

So to come away with fourth and eighth places from what was probably always going to be M-Sport’s weakest rally of the season was a very respectable result.

Esapekka Lappi may have sounded pretty gloomy at most stage ends, but his pace got better and better and he was on course to overcome Loeb for ‘best of the rest’ honors even before the Hyundai’s Sunday dramas.

Suninen set some very strong times on his recovery drive and maximized what he could get from the powerstage, and there were moments of good pace from Greensmith too.

Rovanperä by far the best rookie

For three of the 10 WRC drivers, the mission for the Monte had to be to keep the car on the road and just learn. Any result would be a bonus.

Of that trio, Toyota’s teenage star Rovanperä was – perhaps unsurprisingly – the clear standout.

He ticked that ‘get to the finish, learn the car and the rally’ box with an extremely sensible drive, but was also extremely close to the pace for someone so inexperienced and bagged an excellent fifth place.

Both his pace and his approach were an excellent start to his rookie campaign.

His team-mate Takamoto Katsuta also bagged good points in seventh but was much further off the pace than Rovanperä from the outset and lost several minutes with a Saturday incident.

And Greensmith – the other member of the inexperienced trio – provided excellent rallying meme content that will probably keep cropping up on social media for years to come as his attempt to recover from a spin ended with a bizarre backwards slide off the road and into retirement.

Some solid stage times when he rejoined next day proved Greensmith is better than those laughing at the clip on the internet will think. But there are better ways to make a mark as a rookie at the start of a season…