Oliver’s the here and now. Petter’s a world champion… two decades ago. And Pernilla? She was one of the world’s quickest in a Group N car. She hasn’t forgotten that. So, when the three of them landed into DirtFish Rally School to work with Solberg World Cup winner Robin Jonsson last month, an idea began to build.

Potentially, there would be a spare half-hour at the end of the day, just before the sun went down behind the Cascade Mountains and cast Seattle into darkness.

“We make it one recce and one run,” he said.

“Go and get Pernilla.”

Pernilla and DirtFish’s own Josie Rimmer were locked in a meeting about really important stuff. Professional as ever, Mrs S. stuck to the spreadsheet demonstrating sales of Oliver Solberg merchandise.

In the middle of the pandemic Robin Jonsson won the Solberg World Cup. The Swede’s prize was an expenses-paid trip to DirtFish, where Oliver would be waiting to show him how to drive in a school Subaru WRX STI. Days don’t come much better than that.

Thinking his running was done, Robin had taken his helmet and gloves off and was already working on ways to move his world-beating ability on a sim from the virtual and into reality.

Petter saw no need to dress it up.

“Robin, come on. You will race with me and Oliver.”

I was with him.

DirtFish lead instructor Mitch Williams had spent the day working with Oliver and Robin and would co-drive both Solbergs on this winner-takes-all afternoon.

Isn’t that where the trouble starts?

“I think he’ll be fine,” Mitch said. “I’ve been looking for the signs as the afternoon has gone on and I don’t think the red mist is coming. We’re pretty good at spotting it.

Understanding how hard to push drivers is Mitch’s bread and butter. If he was happy, I was too.

Oliver would be first in the car. Much to his frustration. 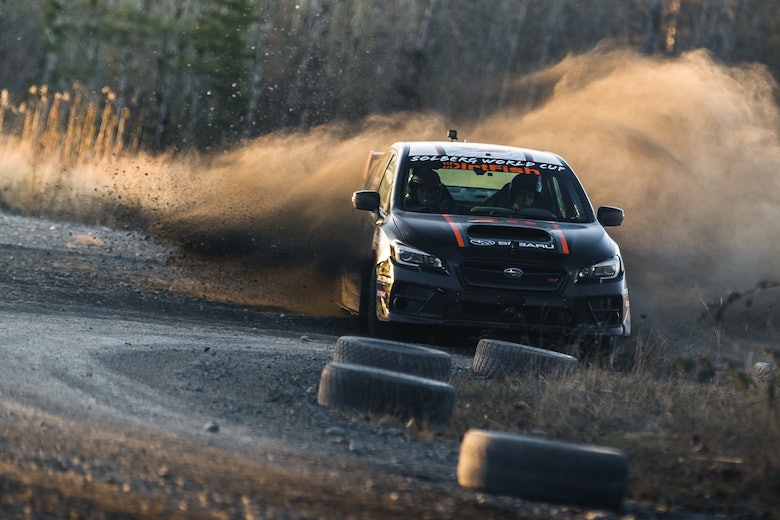 “It’s going to clean,” he added. “My dad is going third, he will have the big advantage now.”

Petter wasn’t exactly helping matters as he made no effort to stop laughing.

Off the line, the WRX bogged. Not a great start.

One minute and 23 seconds later, the DirtFish Subaru was committed to the final right-hander with little left in the way of margin.

“Too slow,” Oliver said. “I was too slow. The launch was not good and then a couple of corners, I just didn’t commit enough. I’ve lost this one.”

Having watched Solberg’s start, Jonsson was taking no chances. With three seconds left of the countdown, his right foot was buried. Moments later, the left foot sidestepped the clutch and the STI was sent.

Anybody who doubted how much virtual speed would translate should have been in Snoqualmie last month. Yes, Jonsson is the world’s best rally driver on a sim, but his actual speed was staggering. Three seconds down on Oliver was a mighty effort.

And it could have been better.

“Maybe one or two seconds faster,” he said. “I could have been faster in some places.”

His shaking hands told their own story. He’d given the ball a hefty kick.

And now, the time had come.

Petter had been distracted for a couple of minutes, busily messaging. DirtFish owner Steve Rimmer had been reached.

Taking off his jacket, his belt and considering how much he needed his shoes and his glasses demonstrated how seriously he was taking the whole power-to-weight thing. And how much he remains a man very much focused on the details.

Listening to all of this, Oliver couldn’t resist.

“Watch this,” he said, “this is what he is always telling me.”

If you feel good cheating, you carry on. You do what you think is the right thing… Oliver Solberg

With that, the 21-year-old leaned into the Subaru and patted his father on the arm.

“If you feel good cheating, you carry on. You do what you think is the right thing…”

With those words ringing in his ears, Petter Solberg launched a Subaru onto a stage in anger for the first time in 14 years.

Petter had indeed failed to find second cleanly. He did, however, find a way to make up for it.

Rarely, if ever, has a school Subaru approached corners at such angles. It’s fair to say a couple of cones were killed in the making of Petter’s lap, but it was his approach to the final left-hander that impressed the most.

Carrying more speed than anybody and understanding that, somehow, he had to make the final corner, the car was aimed at apex. And then a bit more. Tires were sent skywards.

In his first stage end interview for a while, Petter was just the same as ever. Totally maxed out on enthusiasm.

“It was a full attack,” he confirmed. “Mitch was fantastic reading the notes. There wasn’t much left…”

It wasn’t enough. He was down by a second.

But what about style? Style counts, right?

Being the man in the middle, Mitch was perfectly placed to offer the bonus points.

“Oliver was smooth, but without much style,” he said. “Robin was second for style and Petter… wow. That was a wild ride. Very stylish. We were stylish with the cones, the tires, everything!”

A crestfallen Oliver added: “I’m glad I won, but I’m sad for the style. I want to be more stylish.”

And that he did. But the best bit? Oliver’s reaction to his father’s maximum attack. Watch the video, it’s classic. Especially when he tightens his belts. Again.

So, Petter was quickest.

Headlights on against the gathering Pacific Northwest gloom and the Subaru would dance once last time.

This time, Oliver dialled everything in and drove the perfect stage. Balanced, quick and sensationally committed. It was a joy to watch.

“No. I’m calling this one,” said Mitch. A voice coming from the darkness.

With that, a perfect day was done.

Not before a detailed debrief with Pernilla. The outcome?

It’s still got to be answered. Watch this space.

Colin Clark: What makes the Dakar so epic