Rounds of the World Rally Championship are always tough to call, but trying to pick a winner of the 2022 edition of Rally Sweden seems a particularly tricky task.

The championship’s new hybrid Rally1 era is just one round old, meaning a true competitive order is yet to be established. Throw in the fact these new cars haven’t competed on a loose surface and the WRC’s two great champions – Sébastien Loeb and Sébastien Ogier – are both absent for the first time in over 15 years, then it’s clear to see why Sweden is such a tough one to call.

But we don’t like giving our team of journalists an easy job, so predicting a winner of the first Rally Sweden to be held in Umeå is precisely what we asked them to do.

Here’s who they’ve gone for:

Forget what happened on Sisteron last month (when he dropped the Toyota GR Yaris Rally1 just as he was about to power it into the lead of the Monte Carlo Rally). Elfyn Evans is a man as close as I’ve seen him to the top of his game. He’s confident, self-assured and very, very fast right now.

Almost as important, he’s in a good place on the road on day one. It’s almost certain there’s going to be fresh snow falling between the recce and the rally itself and sixth onto the stages means the worst of the snow ploughing should be done by the time the #33 Toyota Yaris Rally1 rocks up.

Talking of rocks, sixth on the road should keep him off the rocks on the first loop should the gravel start to show itself. Two years ago, Evans arrived in Torsby on the back of a solid Monte and delivered the drive of his life to dominate what was a pretty soggy Rally Sweden. To do that in conditions lacking any kind of consistency in a car he still wasn’t entirely familiar with was impressive.

Imagine what he’s going to do with consistent conditions and a car he’s a little bit more familiar with. That’s right people, he’s going to win his second consecutive Rally Sweden and jump-start a challenge for this year’s drivers’ title.

I don’t care that he hasn’t been in a top-line World Rally Championship seat since 2020. I’m not worried by the fact he hasn’t competed in almost five months either. The winner of this year’s Rally Sweden will be Esapekka Lappi.

It’s easy to build a case in Lappi’s favor. While in any other year that caveat of a lack of seat-time in something relevant – or anything at all – would count against Toyota’s newest recruit, nobody has a real grip on Rally1 machinery yet after just one round on a surface not representative of what faces the crews in Sweden this week.

And just look at Lappi’s form if you are in any doubt. His two WRC2 drives in 2021 were genius – and particularly dominant on the snow of Arctic Rally Finland – while fourth place on a high-speed rally like Finland in a Yaris WRC last year was sensational given Lappi had just plugged himself back in.

As he wasn’t in Monte and didn’t feature as high in the 2021 points table as fellow non scorers Ott Tänak and Adrien Fourmaux, Lappi will start second-last of the Rally1 crews on the road on the first day too (behind only Oliver Solberg) which should give him a grip advantage; particularly over another of the certain favorites Kalle Rovanperä who is in the very opposite position.

Elfyn Evans could be the fly in Lappi’s ointment with a favorable road position compared to Rovanperä, Craig Breen et al, clear form on this rally as the last winner of the event in 2020 and a point to prove after beginning the season as a title favorite but faltering on the Monte.

For what it’s worth I don’t think Hyundai can be totally discounted either – particularly Solberg given his road position and sensational Arctic Rally Finland performance last year – as tempting as that may be given their calamitous Monte. But Lappi has oozed class, and speed, since his mini break away from the WRC at the end of 2020. He’s arguably never started an event in as strong a position as this to claim WRC victory number two.

The weather is warming up in Sweden, but should be remaining below freezing and dousing the roads of the areas surrounding Umeå in snow. But once you’ve had a few rally cars over it, is the snow and ice still going to be there during the day?

That is something I cannot predict, but going off the form of the drivers when we were last in Sweden and there was more sludge than snow, then Toyota’s Elfyn Evans could be victory favorite this weekend.

He did a top job to win the last edition of the event, and even if his previous form has been patchy in the country it shouldn’t be an issue. He’s now more heavily involved in car development than ever before, more experienced than ever before and arguably more confident too.
That last one could be crucial as the rally has relocated for 2022 and drivers will need to be able to rely on their own senses as much as their new pacenotes.

I don’t see Esapekka Lappi or the Hyundais challenging on this event, but there could be stern challenges from other areas of the Toyota lineup. However, even if they have the pace, are Takamoto Katsuta and Kalle Rovanperä likely to make the right calls every time on a rally which – like Monte Carlo – will require some clever thinking on which tires to take into a loop of stages and how many of them?

My instinct says Elfyn Evans, but I suspect most of my colleagues will also be picking him and this article is going to get boring quickly if we’re all singing from the same hymn sheet.

So I’ll gulp down a fistful of brave pills and bet on a less likely winner – Ott Tänak.

Hyundai seems convinced its i20 N Rally1 is faster out of the box on low-grip surfaces than it was on the drier bits of asphalt on the Monte Carlo Rally. 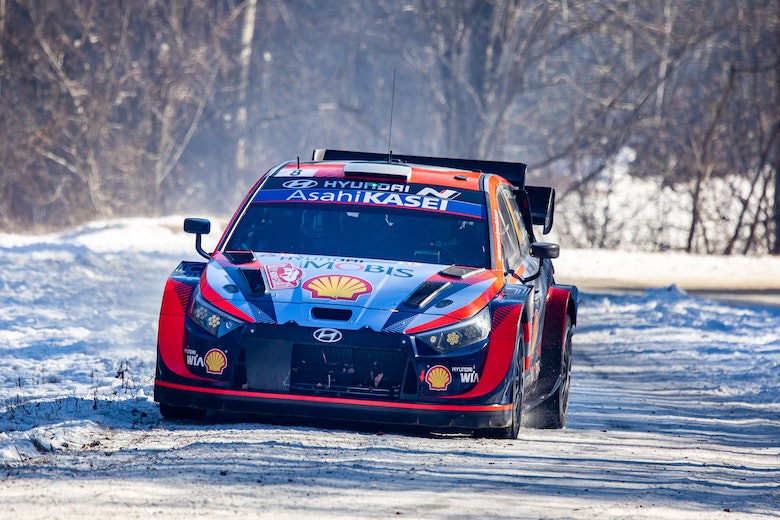 Road position looks like it could be a factor too – there’s been so much snow in the region that reindeer moving patterns have changed, plus there is forecast to be fresh snowfall between the recce ending and the rally starting. Tänak’s Monte DNF might therefore come in handy.

Tänak, on a fast gravel rally, when he’s in the zone, is close to unbeatable. We know this. We saw it at Toyota.

The trio of Yarises will be very difficult to beat this week, but if anyone can do it this time, it’s surely Tänak. So long as the car doesn’t break down first. Which might be asking a lot right now.

The first event on snow for the new Rally1 cars will be spectacular, that’s for sure. But what is less sure is predicting a winner in the frozen northern territory of Umeå.

Last year’s victor Ott Tänak will certainly be looking to make amends for a difficult start to the new season for Hyundai and his prowess on the blindingly fast Swedish roads will take some beating. It’s whether the i20 N Rally1 is up to the task.

Toyota probably comes into the weekend as favorite given the form of the Yaris on the Monte, as well as that of Kalle Rovanperä who finished second to Tänak on Arctic Rally Finland last year.

Rovanperä therefore nudges it in my eyes. His fightback on the Monte was proof that Toyota’s young pretender can manage adversity and he’s in need of a strong result to kickstart his title assault.

Keep an eye out for Esapekka Lappi in the third Toyota GR Yaris Rally1 as well, who may well be in the mix on his return to the top-flight of the WRC for the first time since 2020.

Who are you backing for victory? Let us know in the comments below.

Why Pajari turned down a WRC2 graduation