Yes, I know. Comparing a Hyundai i20 to a Subaru Impreza. Utter sacrilege. I can hear you sharpening a pitchfork as you’re reading this.

But bear with me for a second, there is a point to this. Promise.

If you drive a road-going i20 like it’s an Impreza, you’re going to understeer off into a hedge, or a tree, or some other type of foliage, no doubt. And I’m not going into that here either; the WRX STi isn’t a worldwide sales phenomenon anymore and Mitsubishi’s Lancer Evo has been out of production for four years now. That level of direct road relevance isn’t (entirely) the point.

But their fates are partly intertwined. Let me explain.

“Not the brand you’re used to seeing”

“Let’s see the picture a bit wider. In the first eight positions, there are five Hyundais. It’s something that when I saw it on the screen, really emotions was raising in me because it means a lot for Hyundai Motorsport,” Adamo told DirtFish.

“You know better than me the story of Hyundai Motorsport in motorsport, in rally, how we grow up, we started customer racing. Today we won 1-2 in WRC of course, we won with Jari [Huttunen] in WRC3.

“It’s emotional because I know how much we work in the last years, in the last months. It’s useless for me to repeat the story of the pandemic etc. But it’s not the brand you’re used to seeing crowding the final standings, let me say like this.”

It’s that last bit. Hyundai, not the brand you’re used to seeing make up five of the top eight places.

That’s our reality now. Hyundai, a tour-de-force in rallying.

It wasn’t always this way. Show last Sunday’s result to a rally fan 20 years ago and they probably won’t know whether to be more confused by a global pandemic bringing the world to a standstill for several months, or Hyundai fighting Toyota at the top of the WRC leaderboard and soundly beating M-Sport Ford. Neither sounds realistic, but both happened.

Rallying (but with a British Accent)

The story of Hyundai Motorsport in rallying, as Adamo hints at, is a tumultuous one.

Its first assault on the WRC came in the mid 1990s, and Hyundai went by the book. A car manufacturer from the Far East, contracting an English rally prep firm to develop and run WRC cars based on their road-going platform, was the go-to solution. Subaru had done this to great effect with Prodrive; likewise Mitsubishi with Ralliart, who at that point in time were polishing off a four-peat title run with Tommi Mäkinen.

Hyundai plumped for David Whitehead’s Motor Sport Developments firm; firstly building an F2 kit car before ascending to the WRC in 2000 with a new car built upon the second-generation Accent.

That Accent, while looking a bit more European in design than its predecessors, was still unappealing to buyers in the western world. Nor were its results on rallying’s world stage particularly appealing.

A pair of fourth places by experienced hand Kenneth Eriksson – who along with Alister McRae had formed the backbone of Hyundai’s driving line-up since the F2 days – in the Accent’s debut season gave reason for hope.

But no podiums were forthcoming. By 2003, Castrol’s red and green accents had disappeared from the Hyundais and by Rally Sanremo in October that year, Hyundai had disappeared entirely, along with the money to pay for the program.

“The simple fact is that Hyundai has failed to honor their payment obligations to MSD and we cannot continue if we do not get paid,” said Whitehead at the time.

“In my 28 years of motorsport I have never come across a situation like this where the departure of a manufacturer from a major motorsport championship has been executed so poorly causing such damage and ill-feeling within the sport. It truly is unprecedented.”

Hyundai had planned to return for the 2006 season, but they wouldn’t be back until 2014.

When Hyundai did come back the plan was radically different. No more throwing millions at a third-party rally prep firm; this time they were going in-house, cultivating a European-based performance division for the marque as a whole. Subaru had STi, Mitsubishi had Evo; Hyundai wanted N to be taken seriously.

The original i20 WRC looked a bit odd. A rally winner, yes, but the car didn’t scream cult classic. In the background, an experienced Italian engineer had joined to head up the customer racing division from Honda; Andrea Adamo. Puzzle pieces were slowly coming together.

For Hyundai, N was being usurped by R, Volkswagen’s performance line. But once VW withdrew from the WRC amid an emissions scandal, the window of opportunity opened. The new i20 Coupe WRC was a challenger from the outset. And it looked mean. It looked fast. It actually looked cool.

A Hyundai that looks cool! What is this sorcery?

And it was fast, too. By 2019, it had won a world championship. As it stands, it may well win another one this year. It’s also the fifth straight year Thierry Neuville’s been a contender for the drivers’ championship.

Adamo meanwhile had been working to get the i20 R5 program up and running. They weren’t the fastest out of the box in class but thanks to continued development, it’s now a match for class-leading Fiestas and Fabias.

This is the new normal. Hyundais are quick. They look fast and they go like stink on a rally stage. And you don’t need to look twice and wonder ‘what’s that thing?’ when an i20 is parked on the side of the road. You know. The world knows. It’s not an oddity anymore.

One thing it’s still chasing is the double: both the drivers’ and manufacturers’ titles at once. Along with a drivers’ title on its own, it’s one of the few achievements Hyundai is still craving that Subaru checked off its list during its own WRC stint.

“I like movies and books,” says Adamo. “In The Best [Exotic] Marigold Hotel, there is the chief of the hotel that says at the end everything will be good. If it’s not good, [it’s] because it is not the end.

But the journey might be close to ending. Hyundai is understood to be the reason delivery of the new hybrid components for 2022 cars is running late, the FIA pushing the deadline back so Alzenau can agree its WRC future with the corporate bigwigs in Korea.

When Hyundai came into world rallying, it was a relatively obscure car brand outside its domestic market. But if it was to leave the WRC at the end of next season, no-one’s going to forget them in a hurry now.

From obscurity to ubiquity. Does that remind you of any other WRC teams? 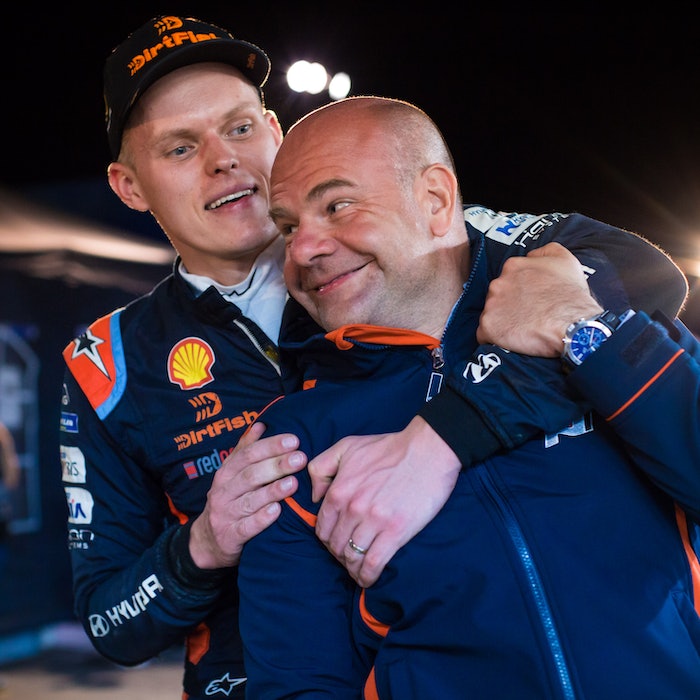 Getting to know the real Adamo

Andrea Adamo has brought a lot of character to Hyundai's WRC presence since being appointed team principal in 2019. Find out more about him in this exclusive from DirtFish.